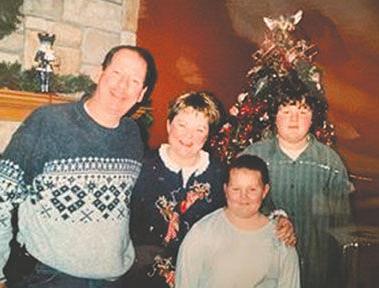 Daniel Duffy and his family, wife Kathy, and children Mary Margaret and Tim enjoy the holidays. Kathy Duffy died in 2005. Daniel, known as “Duff” by many, overcame the various challenges of life and was a dedicated father to his kids. 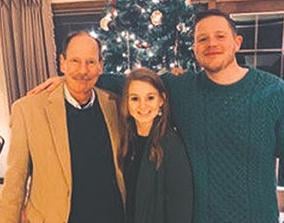 Duffy considered Tim and Mary to be his greatest accomplishments.   Mary completed her undergraduate degree in psychology and is completing her master’s degree in social work in Colorado, and Tim lives in California working with State Farm Insurance. 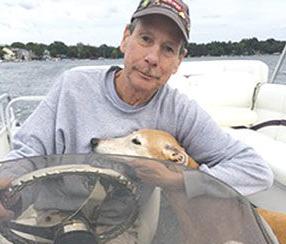 A single, empty-nester, Duffy lived with Scarlett, a greyhound he rescued after the dog’s days circling the betting track at Lake Geneva Racetrack. Duffy also became an accomplished dancer and won many medals.

Daniel Duffy and his family, wife Kathy, and children Mary Margaret and Tim enjoy the holidays. Kathy Duffy died in 2005. Daniel, known as “Duff” by many, overcame the various challenges of life and was a dedicated father to his kids.

Duffy considered Tim and Mary to be his greatest accomplishments.   Mary completed her undergraduate degree in psychology and is completing her master’s degree in social work in Colorado, and Tim lives in California working with State Farm Insurance.

A single, empty-nester, Duffy lived with Scarlett, a greyhound he rescued after the dog’s days circling the betting track at Lake Geneva Racetrack. Duffy also became an accomplished dancer and won many medals.

Daniel Duffy’s greyhound, Scarlett, slowly rose from the living-room couch that she shared with the man who most folks simply knew as “Duff.”

Duffy had rescued the former race dog from certain extermination, but now, Scarlett trots slowly around their home, sniffs through hallways and an open bedroom door, abandoned in her own home because her master will never return after succumbing to cancer and a collapsing body that could no longer take the rounds of chemotherapy.

With his son, Tim, by his side, Duffy, 65, died on Feb. 8 at OSF HealthCare Little Company of Mary Medical Center in Evergreen Park after a fierce, but quiet, battle to fight the disease.

“It happened so fast,” said Tim, who a few hours later would pick up his sister, Mary Margaret, at Midway Airport.

Their father is being mourned by many others.

“There are no words that can express the love and admiration I had for Duff,” said Bill “Harpo” Mitchell, a neighborhood friend who watched with others as Duffy bravely answered life’s unfair challenges and redirected his priorities.

Tim and Mary are Duffy’s greatest accomplishments in his shortened life.   Widowed, he rebounded after the loss of his wife, Kathy, who died in 2005 due to complications from diabetes. Duffy mustered the strength to harness his own vices to funnel his dedication and affections to his son and daughter.   That they would leave for college and move from 109th Street in Morgan Park and into satisfying careers is testament to their father’s perseverance, guidance and ability to inspire them to find their own way.

While Mary completed her undergraduate degree in psychology and is completing her master’s degree in social work in Colorado, Tim flourished in California and found a career he loves with State Farm Insurance.

“Scarlett would lay on the couch waiting for Dad to pet her, and as he started to pet her,” said Mary, “she would do the ‘huckle buck’—as my dad would say—spinning, twisting moving around and just loving it all.”

Tim said the dog was a special friend for Duffy.

“Scarlett kept my dad moving and gave him company,” he said. “Scarlett  would run small-track races in the back yard.”

A single, empty-nester, Duffy found his inner Renaissance man and drew comfort in gardening, ballroom dancing and video games. He was always ready to attend graduation ceremonies and the like, and he eagerly awaited the next visit from his kids, whom he would brag about to neighbors.

Cancer crept into Duffy’s life while he was enjoying a second career at the Ace Hardware on 111th Street in Mt. Greenwood. He told no one, and life went on.   During lunch breaks and after work when Duffy would pull his jeep up his long driveway, Scarlett would howl loudly enough for neighbors to hear.

Duffy would surface moments later, walking Scarlett around the block, unleashed, but never far, after years of being contained to cages, starting gates and race tracks.

Duffy was always more inclined to help someone in need than himself. One time, a neighbor, Frannie Figel, was home alone and had been instructed to start a gas grill—a first for her. Duffy noticed her struggles and came across the driveway to assist the college student. As he triggered the wand while looking for the grill’s ignition opening, a ball of fire engulfed his head, knocking him back and giving him a grooming he hadn’t counted on.

Duffy enrolled in the Arthur Murray Dance Studio, embracing ballroom dancing and Latin-style lessons. On some summer nights, he practiced solo on his back deck holding an imaginary partner and dipping her under the light of an eastern moon.

“Dance made my dad the happiest,” said Tim. “I remember the first time he was dancing competitively in front of a crowd. I came home from college just to be a part of it. As we were leaving the house for the studio, he started crying.”

“He was so excited and nervous,” she said. “You could see the true passion he had for dance. It was beautiful. My dad met many great people through the dance studio, and he always thought about them.”

Later, Duffy used his dancing prowess on dance trips to Banff in Alberta, Canada, and he later took dance cruises to stay in step and was always top-deck.

“Dad received a lot of trophies and medals from dance, winning gold, silver and bronze in different competitions,” said Tim. “He worked so hard for those gold medals.”

Duffy was “king” of the 109th Street block parties held on the second weekend of August. The Duffy home—situated in the middle of the block—hosted children’s games on the parkway lawn while kids rode bikes up and down the steep driveway apron.   Around dusk, Duffy would deliver trays of delicious, multi-colored gelatin shots to the adults “because nobody’s driving home tonight.”

A 1973 graduate of Mendel High School, Duffy attended Regis University in Colorado for a time and then returned to his beloved neighborhood to take a job with Frank Cunningham, a business owner who looked out for the younger crowd and employed hundreds at his neighborhood institution at 111th Street and Artesian Avenue.

“Working at Red’s Drive-In was one of the best times of his life,” said Tim. “Dad always told stories about Red’s, and that’s where he met some of his best longtime friends.”

Those friends would gather annually on “Duff’s Back Deck” for the South Side Irish St. Patrick’s Day Parade. There were no invitations, just an implicit understanding that Duffy would be ready with an Irish greeting for the Mitchell, Quinn, Looby and McCoy families and friends from the hardware store.

Prior to working at that store, Duffy was as a handyman at senior citizen residences.

“All the older people fell in love with Dad,” said Mary. “They baked stuff for him and gave him presents for all the extra work he did in their apartments.”

“I went to work a few times with Dad,” said Tim. “And you could see how loved he was and how much he loved his work and doing things for them.”

In addition to his children, Duffy is survived by his sisters Patricia, Nancy, Sally and Peggy and many nieces and nephews.