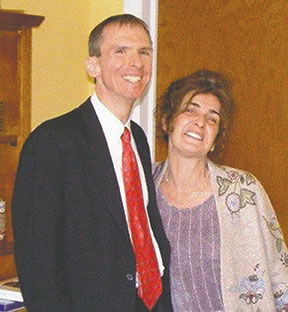 Corina Turcinovic, a longtime Beverly resident from France, and U.S. Rep. Dan Lipinski gather in 2008, around the time Lipinski began assisting her efforts to receive a green card and prevent her deportation. 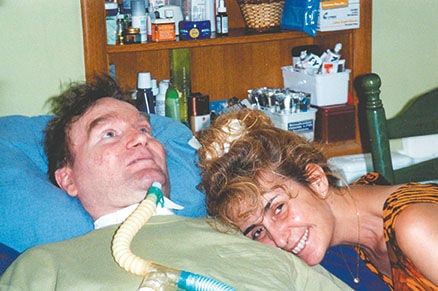 Corina Turcinovic cared for her husband, Marin, in Beverly after he was left a quadriplegic following a car accident in 1990. He died in 2004, and she had been on the verge of being deported several times before receiving a green card on Aug. 22.

Corina Turcinovic, a longtime Beverly resident from France, and U.S. Rep. Dan Lipinski gather in 2008, around the time Lipinski began assisting her efforts to receive a green card and prevent her deportation.

Corina Turcinovic cared for her husband, Marin, in Beverly after he was left a quadriplegic following a car accident in 1990. He died in 2004, and she had been on the verge of being deported several times before receiving a green card on Aug. 22.

Corina Turcinovic has a past that is marred by tragedy, misfortune and uncertainty, but she can now look forward to much better times.

Turcinovic, a longtime Beverly resident from France, was granted a last-minute green card in August that prevented her from being deported.

With help from U.S. Rep. Dan Lipinski, Turcinovic can now remain in the U.S. as a permanent resident.

After her finance suffered a catastrophic injury in 1990, Turcinovic came to the U.S. Since his death 15 years ago, Immigrations and Customs Enforcement (ICE) authorities have worked to force Turcinovic to leave the country, but government officials passed legislation this summer allowing Turcinovic to stay.

The storm has passed—and it’s not coming back.

“I think I feel like one of those mornings when there’s sunshine after it’s been raining for six months,” Corina said. “And I’m looking for the cloud because there’s got to be one somewhere. But, I can’t find any. It’s so liberating.”

Turcinovic, 55, received her green card on Aug. 22—after ICE had ordered her to leave by July 8 then allowed her to stay as Lipinski worked on legislation to permit her to remain permanently.

Turcinovic moved to Florida on Oct. 1, looking for a fresh start, although she plans to visit Chicago regularly to see the many friends she made.

Her journey almost took a different path—one of deportation—many times, and her heartache began long before she was almost deported.

Turcinovic came to the U.S. almost 30 years ago after her fiance, Marin Turcinovic, was struck by a drunk driver in February 1990 while visiting New Jersey. The accident and subsequent medical care left him a ventilator-dependent quadriplegic.

Corina Turcinovic entered the country legally and became his full-time caretaker. They found a “cute little house in Beverly,” she said, that was wheelchair-accessible and had wide hallways.

Corina originally entered on a visa waiver, but it expired in May 1990—and an application to extend it was denied that September. She and Marin were both deemed deportable about five years later, but they stayed in the country and married on Feb. 29, 1996.

Marin filed an application for suspension of his deportation based on his seven years of U.S. residency and extreme hardship, and the application was granted on Aug. 27, 1997. He received a green card on Sept. 30, 1998.

On Nov. 22, 1999, Marin tried to change Corina’s status, filing a petition for her based on her marriage to a legal permanent resident. That petition was approved on April 12, 2001, and the National Visa Center scheduled an appointment for her at the U.S. consulate in Paris, France, on Feb. 25, 2002. She abandoned the application, however, because she couldn’t leave Marin.

He then filed a naturalization application on Sept. 4, 2003, but he was required to appear in person for fingerprinting—which he was unable to do because of his condition—and officials never came to his home for his fingerprinting.

He was not naturalized before his death on April 28, 2004, and his application was classified as abandoned. As a result, Corina was never an immediate relative of a permanent resident.

Marin’s death crushed Corina emotionally, and once again, authorities were trying to deport her.

“That was when everything collapsed around me,” she said. “I didn’t have the energy to really do much about it because I lost everything that I was living for. My friends at the time were all the nurses. … That went away overnight. I ended up all by myself in my house and with people telling me I had to leave.”

Lipinski stepped in about a decade ago. While campaigning at a train stop in Beverly, Lipinski met a friend of Corina, who explained Corina’s story so thoroughly to the congressman that the friend missed his train.

Lipinski said he “got on it immediately,” and three times—once every two years—he introduced a private bill on Corina’s behalf to change her status. The bill made it through the U.S. House of Representatives but never through the U.S. Senate, and Corina was held for about one month at a detention center in McHenry County around 10 years ago.

Lipinski visited her there, she recalled, “and from that day, he never stopped helping.”

When she asked him how much he would help, he had a crystal-clear answer.

“He said, ‘Til you get your green card,’” Corina said. “It was really a huge boost. … This is a man of principles. When he makes a promise, he really does his utmost to make it [a reality].”

After re-marrying, Corina tried in March 2018 to change her status, but she was denied in April 2019, motivating Lipinski to introduce the private legislation that finally saved her from deportation.

Lipinski said he has worked to help many people with similar issues regarding their legal status, but “nothing quite as dramatic as what happened with Corina.”

He said he was “ecstatic” when Corina received her green card and texted her that day.

He said changing her status was “the right thing to do.”

“It was such a clear-cut case that I thought it was really important,” Lipinski said. “I at least hoped that in the end the right thing would win out. It wasn’t just asking for an exception for her. It was really the fault of the government. She should have been protected to begin with.”

Corina met Marin while working in tourism in his home country of Croatia. They “became best friends,” she said, “and then, we became inseparable.”

After the car accident, she just wanted to take care of Marin. He needed two caretakers at all times.

Staying in the U.S. was never in her plans.

“It’s really love that brought me here,” Corina said. “It’s not the need to be here or to look for a job. I know that’s the case for many people, but it wasn’t for me. I had no intention of staying.

“As it turned out ... [Marin’s] condition was really, really serious, and his spinal cord injury was [worse] than the one Superman [actor Christopher Reeves] suffered. His body was hanging from a thread. That’s how much nerve was left, and it’s miraculous that he survived. We didn’t have all the kind of personal help that famous people have, so you had to be there.”

Despite the situation, Corina said, it also included moments of happiness.

“It was not a problem; I don’t regret any minute of it,” she said. “I was happy about it. I remember he told me once that he was happy, and that left me breathless.”

Corina has not returned to France because her visa is expired, and she would be required to wait 10 years to come back to the U.S.

She also said the Beverly community welcomed her and supported her during Marin’s health struggles, so she didn’t want to leave.

“I had roots. My life, it had to be here,” Corina said. “Because I went through all that with my really, really close friends, and you know when you go through something really difficult, those friends who are there at the time become really, really unique. I didn’t want to leave them.”

After Marin’s death, Corina sought a new direction in life. In a stroke of good luck, she found two loves: salsa dancing and her new husband, Wes.

She enjoyed dancing at Willowbrook Ballroom, which was destroyed in a fire three years ago. She said dancing opened up her world.

“You meet lots of people—and I met my husband on the dance floor.”

She warned Wes that she had a complicated life, but now, they can smile.

“We were laughing recently. I said, ‘See what I put you through?’” Corina said. “But we won, so we figure it was worth it.”

The couple moved to Florida to get away from the cold weather, Corina said, and she is ready to enjoy her “new freedom” knowing she can travel without worries of being detained.

She loves the people she met in Beverly, but her home also has “some bad memories.”

“[My husband] is gone; my dog died in the house,” Corina said. “ICE knocked on that door, and every time I look at it, I remember. I had PTSD for probably 10 years after that. I always thought they were coming to get me.”

Corina wants to work on becoming a U.S. citizen, and she wants to find a job.

She also hopes to visit France some day to see her family.

However, she will never forget her friends in Beverly—and they can expect to see her soon.

“I will come back,” Corina said. “This is my second home now.”