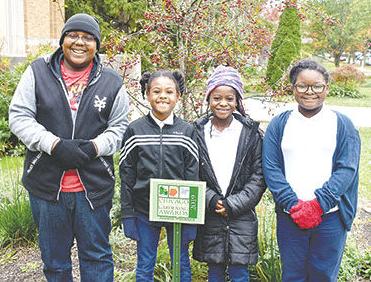 Kellogg Elementary School students Zachary Robinson (from left), Imani Ballard, Alexis Sanders and Aina Fairley celebrate with their sign commemorating the school’s garden being named a winner in the 2019 Chicago Excellence in Gardening Awards. As members of the school’s garden club, the students grow vegetables in a learning garden, plant flowers, weed and perform other maintenance duties year-round. Kellogg was honored for the second year in a row. (Review photo) 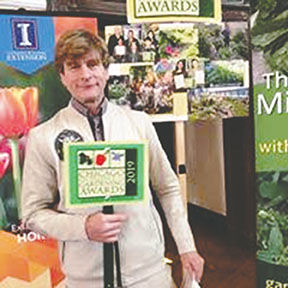 Greg Fischer, owner of Wild Blossom Meadery and Winery, celebrates with his award, which he and his wife, Audrey Fischer, earned for their garden full of perennials, annuals and native plants at their business just outside North Beverly. They also tend beehives on site that provide honey the couple uses to make mead. 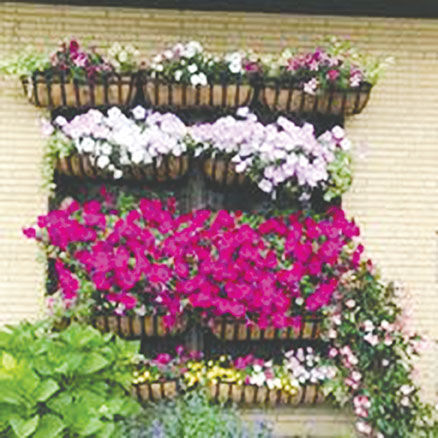 Kellogg Elementary School students Zachary Robinson (from left), Imani Ballard, Alexis Sanders and Aina Fairley celebrate with their sign commemorating the school’s garden being named a winner in the 2019 Chicago Excellence in Gardening Awards. As members of the school’s garden club, the students grow vegetables in a learning garden, plant flowers, weed and perform other maintenance duties year-round. Kellogg was honored for the second year in a row. (Review photo)

Greg Fischer, owner of Wild Blossom Meadery and Winery, celebrates with his award, which he and his wife, Audrey Fischer, earned for their garden full of perennials, annuals and native plants at their business just outside North Beverly. They also tend beehives on site that provide honey the couple uses to make mead.

They were recognized for the work they do to help those in need and to create a healthier environment, and many have collaborated on charitable efforts.

Gardens at Kellogg Elementary School, Beverly Farmacy, Bethlehem Evangelical Lutheran Church, and Wild Blossom Meadery and Winery were among the 68 winners in their respective categories.

The award recipients were honored on Oct. 12 at the Austin Town Hall Park auditorium.

Kellogg seventh-grader Zachary Robinson, who is a member of the garden club that helped Kellogg become the only school to win two years in a row, said he is proud.

“I feel grateful,” Robinson said. “I think it’s amazing that we have all this success. Because back when the garden club was little, we only had a few people, and we weren’t really doing a lot. But, we’ve got amazing people now who like to work and like to change the garden. I think it’s a very good job—and we’re going to continue it.”

Kellogg’s garden, which was honored in the school category for preschool to high school, is spread across the campus at 9241 S. Leavitt St. Cared for by the student garden club that meets every Tuesday year-round, it includes two beehives, flowers planted along a fence on the perimeter of the campus, a learning garden featuring a wide variety of vegetables, and peace pavers that serve as a walking path for students entering the school.

The club donates produce to the Beverly Farmacy, and a few years ago, Barb Gyarmathy, who works on the BAC courtyard garden and Bethlehem’s garden, visited with students and planted milkweed seeds.

Their hives are home to tens of thousands of bees, and fourth-grader Aina Fairley said raising them is among the highlights of the club.

“My favorite part is visiting the bees, although I’m scared of them and I keep running away,” Fairley said. “My other favorite part was [on Oct. 15], pulling out weeds from the fence.”

Students donate crops but also get to enjoy some of them.

“I call it a buffet garden,” Sanders said, “because we can eat every single thing in there.”

She is proud the club can help the other gardens that were recognized.

“There’s some serious gardening cross-pollination going on in this community,” she said.

Robinson said the club is making a big impact with its donations.

“I feel very honored that I’m helping people out. It’s all of us together who help them out,” Robinson said. “I feel like I’m changing the world one plant at a time.”

The Beverly Farmacy, which won in the Urban Farm category, is managed by Rashelle Strate, who grows produce at her East Beverly home and donates her harvest, as well as other items that donors provide, to St. Sabina/Catholic Charities Social Services Center in Auburn Gresham.

She’d love to eventually remove her lawn, using all the greenspace for gardening, and she hopes her award inspires others to grow produce for others.

“I hope that it brings some attention and more people initiate their own group,” Strate said. “Or, maybe people will ask me how to [garden] in their own neighborhoods.”

She credited Bill Evans, Marilyn Klein and Linda Wygant for leading the effort.

The garden also features sunflowers and pollinators, and Gyarmathy said its aesthetics helped win the award.

“It wasn’t just row after row of vegetables,” Gyarmathy said. “I think the pollinators were a big help.”

Wild Blossom, 9030 S. Hermitage Ave., was the winner in the Other organizations-Ornamental category. Owners Audrey and Greg Fischer have planted as many perennials and native plants as possible, they said, along with annuals to spruce up the space while the perennials and native plants mature. With the Dan Ryan Woods as a backdrop, the garden, which features cone flowers, butterfly bushes and sunflowers, attracts honey bees, bumblebees, fireflies, worms, butterflies, birds and raccoons.

They also maintain beehives that provide honey to make mead, and they use dandelions to make wine. They use water barrels to collect rainwater, and they compost weeds and grass clippings.

The Fischers purchased the property three years ago, transforming a former industrial building into a place that makes and sells wine and mead, as well as offers classes on making the beverages.

Greg Fischer first noticed the property several years ago while on a morning jog.

“We had a vision for this place years ago,” he said. “I wanted to have gardens around it, and that was [ideal] for this place, [people] come by and see these beautiful gardens. … When the vision comes true, that, to me, is one of the biggest joys.”

The Edna White Garden is named after a Morgan Park resident who created the garden in an abandoned lot. White was a member of a local garden club and the Morgan Park Council on Human Relations. She was murdered in 1993 at age 79.

Today, according to Executive Director Kathy Figel, of Morgan Park, the garden includes beehives, organic gardening, vegetable beds for rent, a tool shed, as well as programs for adults and children. Produce is donated to the Maple Morgan Park Community Food Pantry.

The BAC garden, which contains roses, zebra grass, hostas, lilies, geraniums, limelight hydrangeas and lilacs, was dedicated to Morgan Park resident Pat McGrail in September. She is a former BAC executive director and worked for many years with fellow members of the Garden Club of Morgan Park/Beverly Hills to maintain the BAC grounds.

Gyarmathy is a current club member. She said she wasn’t disappointed that the garden didn’t earn a first-place award this year, but she is “bound and determined” to win next year.

According to organizers, the Chicago Excellence in Gardening Awards honor “the hard work and creativity that make our city a healthier, more beautiful and more sustainable place.”

Gardens from 43 wards and 75 neighborhoods were honored this year.

For more information, visit the website for the Chicago Excellence in Gardening Awards.