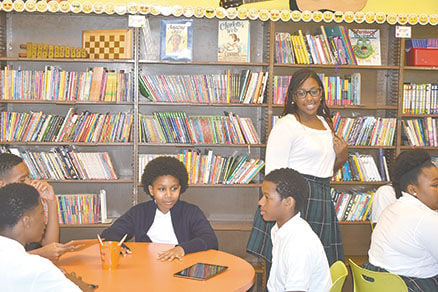 Students at Vanderpoel Humanities Academy enjoy the new library that opened on Oct. 8. After reading about a proposal by a group of students in June to establish a library, members of the Beverly Hills Junior Woman’s Club donated thousands of books to help turn the idea, which was submitted for the Vanderpoel Hackathon, into reality. (Review photo) 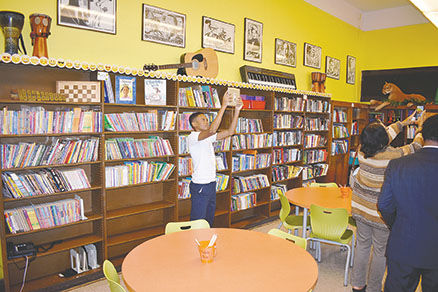 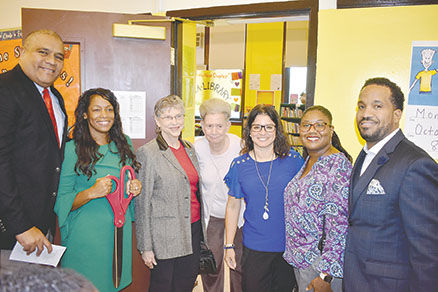 Students at Vanderpoel Humanities Academy enjoy the new library that opened on Oct. 8. After reading about a proposal by a group of students in June to establish a library, members of the Beverly Hills Junior Woman’s Club donated thousands of books to help turn the idea, which was submitted for the Vanderpoel Hackathon, into reality. (Review photo)

When members of the GFWC Beverly Hills Junior Woman’s Club found out that students at Vanderpoel Humanities Academy were trying to revive the library at the elementary school in Beverly, they didn’t waste any time in helping out.

After a three-month effort, the school, 9510 S. Prospect Ave., now has a library with hundreds of books, desks and comfortable reading spaces.

The Juniors donated the books after learning of the school’s Hackathon, a spring project in which students pitched ideas to improve the school. The library idea wasn’t named one of the five winners that received $500 each for their project, but the Juniors made sure the library became a reality.

A ribbon cutting was held Oct. 8, with club members greeted at a festive assembly at the school before visiting the library, which is in a classroom space.

“It was empty, and then it wasn’t,” said Carla Herr, club president. “There were boxes everywhere. ... We’re just a tiny, small club, but we can do big things.”

According to Herr, the club donated about 3,000 books, and more came in from Vanderpoel classrooms.

The Juniors’ effort began after members read about the Hackathon in The Beverly Review in late June, she said. Starting in July, she began asking for books on social media, and the club delivered “the first wave of books” in August. They’ve visited on several weekends since.

Waddy said she couldn’t believe it when the club reached out to her mother about the details of the project, and she and the rest of her Hackathon group were called into a school office to be told the good news about the club’s support.

Students have worked in recent weeks to stock the shelves at the library.

“I like it,” Waddy said. “I think it’s nice that now we actually have books to read, and we don’t have to go and read books at home.”

Students explained at the assembly how much the library would benefit them and sang a song thanking Herr and the club.

As she sat in the library, Walker was thrilled with the new amenity.

Vanderpoel Student Affairs Administrator Kim Donson, who supervised the Hackathon, said the school had been without a library for five years because of budget issues. The new library, which will also serve as an art room, features five round tables, as well as a carpeted space with soft chairs.

“My heart is overflowed with joy,” said Donson, who couldn’t wait to see students of all ages enjoying the library. “I appreciate the community.”

The winning projects from the Hackathon, which was also led by 2010 Vanderpoel graduate Dejah Powell, were an after-school yoga program, a recycling program, new technology for the school’s humanities program, a makeover for the girls bathroom and a new water fountain. Donson said most of those projects have been completed.

The Rev. T.D. Hughes, senior pastor of Third Baptist Church of Chicago, which provided $500 to one project, also surprised students with pizza on Oct. 8.

Herr and Donson also received gifts from the school.

“Kim comes in on weekends. She’s here all the time,” Herr said. “This wouldn’t have happened without her.”

Herr said the previous library had about 5,500 books. The Juniors are still accepting donations, and they will assist Vanderpoel for the next year.

However, Herr said, the club’s work is far from over.

“Our goal,” she said, “is just to get as many books as possible.”