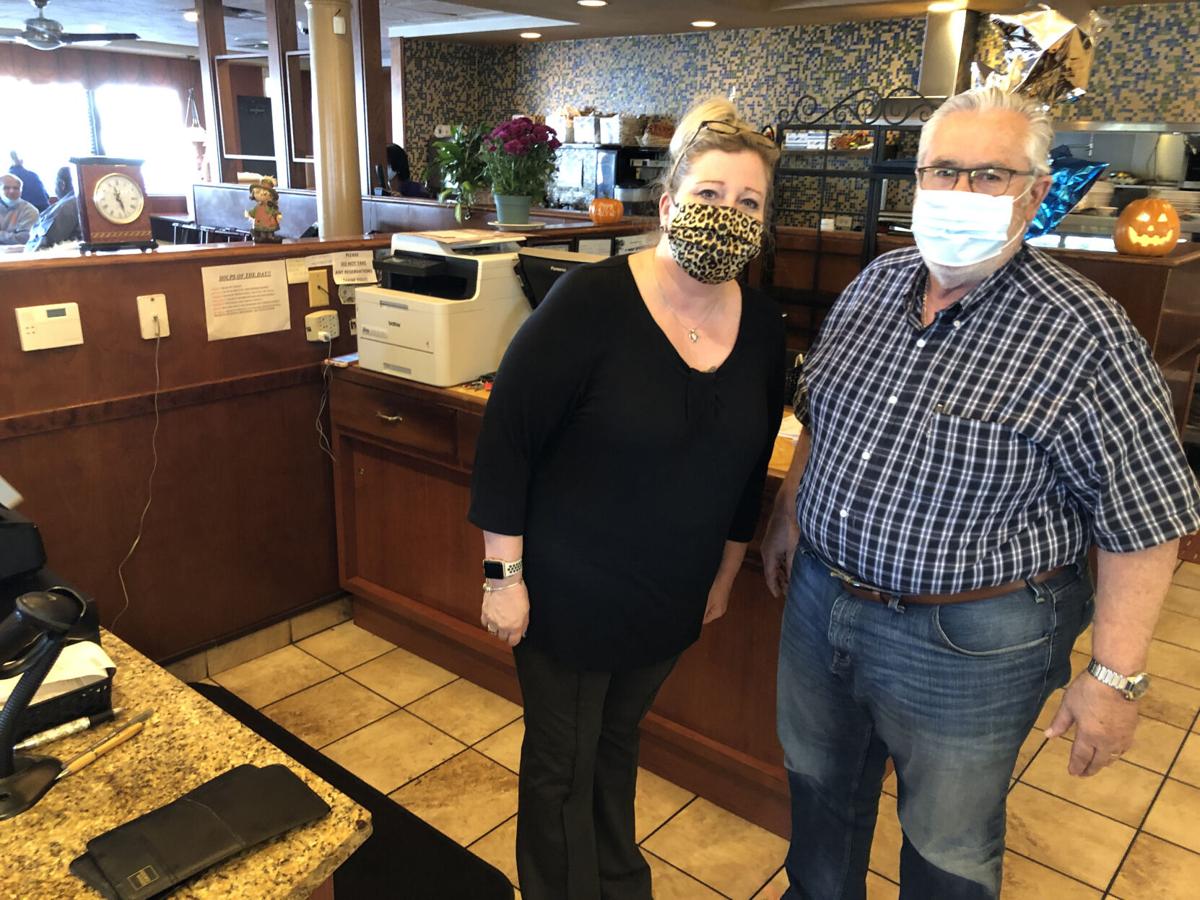 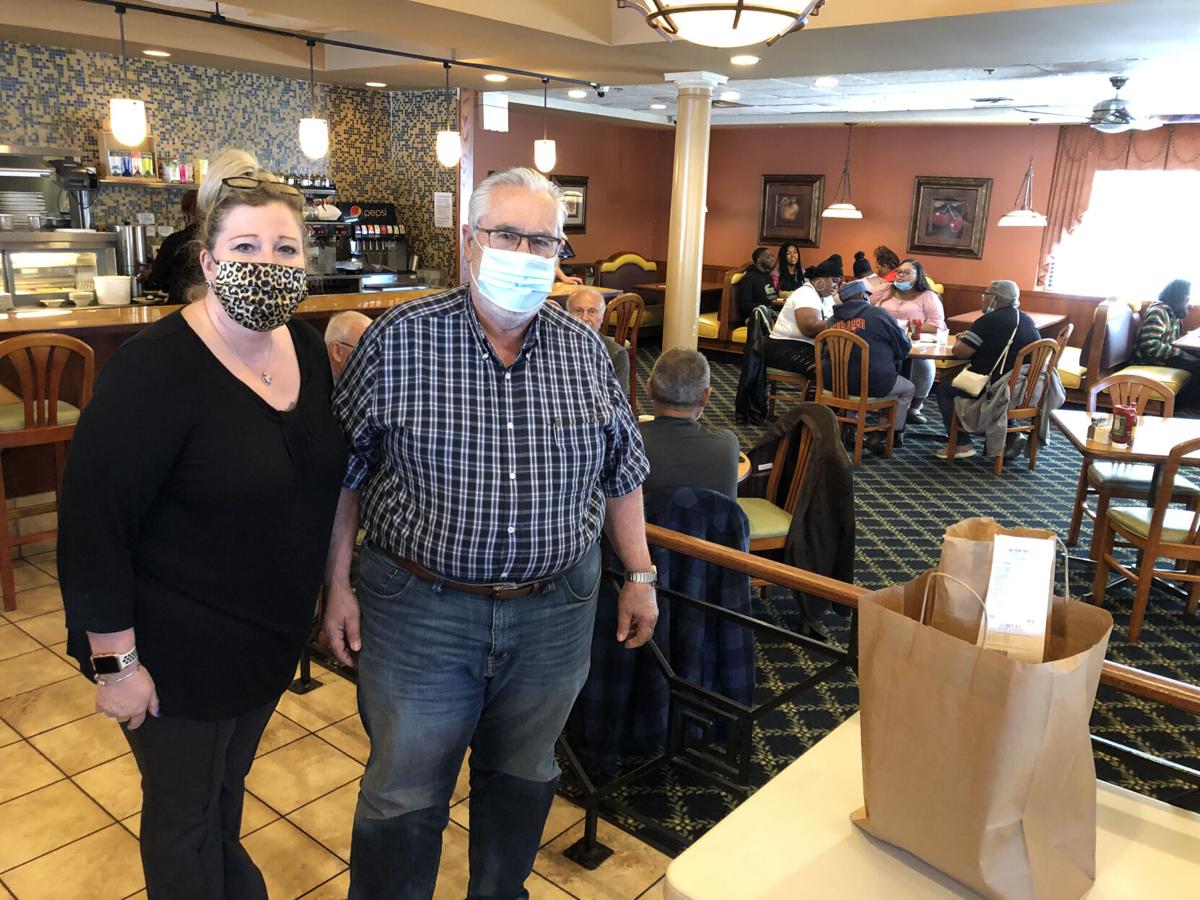 Lumes Pancake House Manager Beverly Hubick and Owner Dimitrios Klapsis continue to serve customers, but they need more to return to the longtime family business in Morgan Park after a shooting in their outdoor dining tent in August. The tragedy caused a dramatic drop in business, and the restaurant recently sent a letter seeking community support. (Review photo)

Lumes Pancake House Manager Beverly Hubick and Owner Dimitrios Klapsis continue to serve customers, but they need more to return to the longtime family business in Morgan Park after a shooting in their outdoor dining tent in August. The tragedy caused a dramatic drop in business, and the restaurant recently sent a letter seeking community support. (Review photo)

The letter from Lumes Pancake House to the community is direct albeit sad.

After the restaurant, located at 11601 S. Western Ave., in Morgan Park, was the site of a mass shooting in late August in which a man was killed while dining in Lumes’ outdoor tent, business has suffered dramatically.

“Since that day, many of our local customers have been missing,” the letter said. “We want you to know that we have been patiently waiting for your return. Lumes has always been a proud member of this community, and we now need your help.

“Please let people know that they are missed and to come back to Lumes.”

As Dimitrios Klapsis sat in the Lumes dining room surrounded by several occupied tables on Oct. 2, the owner remained optimistic about his restaurant recovering.

“People are slowly coming back,” Klapsis said. “They’re still thinking about [the crime]. The tent is not here anymore. We took the tent out on the 15th of September. But, people are still afraid. In the 25 years we’ve been here, we’ve never had something like that.”

After the tragedy, business crashed by 75 percent, Klapsis said. Before that—and during the pandemic—business was at about 65 percent, he said, and things were “good.”

Lumes was allowed to have 25-percent capacity inside, and the outdoor tent provided more seating. The restaurant also offered carryout and curbside pickup services, which are still available.

Early in the pandemic when Lumes was allowed to offer only carryout, Klapsis had only a few employees working. When indoor service resumed in June, three people were working at one service station, but the tragedy forced Klapsis to change his staff’s work schedules yet again.

Since the shooting, only two people are working at that station. In another area, three people work where there were once four.

“We had most of the people back working, and everybody was making money,” Klapsis said. “But now that this has happened, I’m limiting my people.”

Lumes sent the letter in late September to numerous churches and schools, as well as the office of 19th Ward Ald. Matt O’Shea, notifying them that the Lumes staff is “anxiously waiting to see” longtime customers.

The Lumes menu features a long list of breakfast and lunch items, and Klapsis said two things have kept his business strong for over the decades: great service and food.

“We have good food here, and it’s fresh,” Klapsis said. “Everything is cooked to order—nothing from the day before—fresh soups every morning, fresh-squeezed orange juice every morning. That’s what keeps us going all the time—the service and the food.”

The crime occurred on the afternoon of Aug. 30. Several men armed with guns approached the restaurant, according to the Chicago Police Department, exited their vehicle, then opened fire inside the tent.

Devon Welsh, of the Back of the Yards, was killed. Police said he was the intended target. Four other people were shot and treated at area hospitals.

According to media reports, police said Welsh was the target because he hadn’t split up looted items from recent protests with his assailants.

Police released security videos of the offenders, with one segment showing them fleeing in what appears to be a dark-colored mid-sized SUV.

No arrests have been made, and CPD Area 2 detectives continue to investigate.

On that day, Klapsis said, he left the restaurant about an hour before the shooting to visit a storage facility that his business uses. He had planned to go home from the facility but returned upon hearing of the shooting.

Staff working that day have returned to their jobs, he said, and Manager Beverly Hubick, an employee for 13 years, said their “hearts go out to the families” of the victims.

She said two schools already responded to the letter with large carryout orders.

“It’s a beautiful restaurant,” she said, “and it’s a family restaurant.”

Klapsis said that in a normal year business usually goes down in September because families are saving money after summer vacations and school is back in session.

He said October will be better.

Beginning Oct. 1, the city allowed restaurants to offer indoor services at 40-percent capacity, and Klapsis is confirming with officials on how many people he will be allowed to seat. He would love to open up more tables, installing shields around them as an extra safety measure.

Regardless, he will just continue to promote the quality of Lumes Pancake House.

“I’m here all the time trying to improve, for the people to understand what’s going on, and we’ll take it from there,” Klapsis said. “I don’t know; there’s nothing else I can do.”