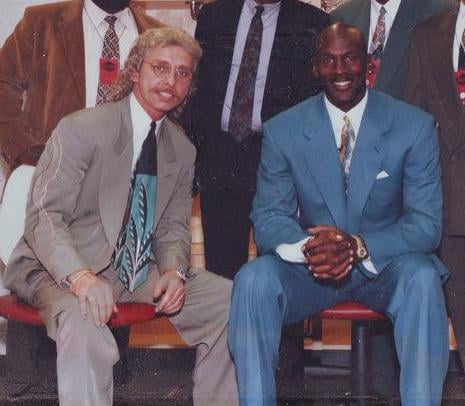 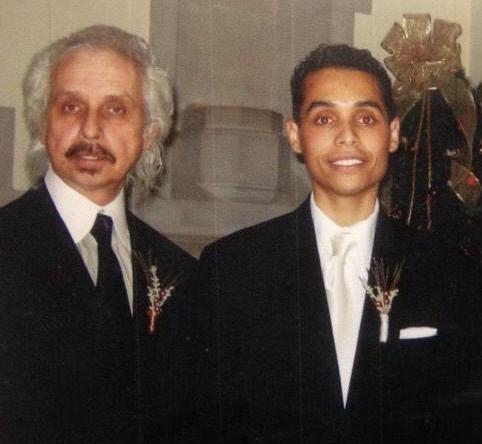 John Wozniak (left) died in January after a battle with colon cancer. His son, Nicholi has seen his father’s memory honored in ESPN’s “The Last Dance.” 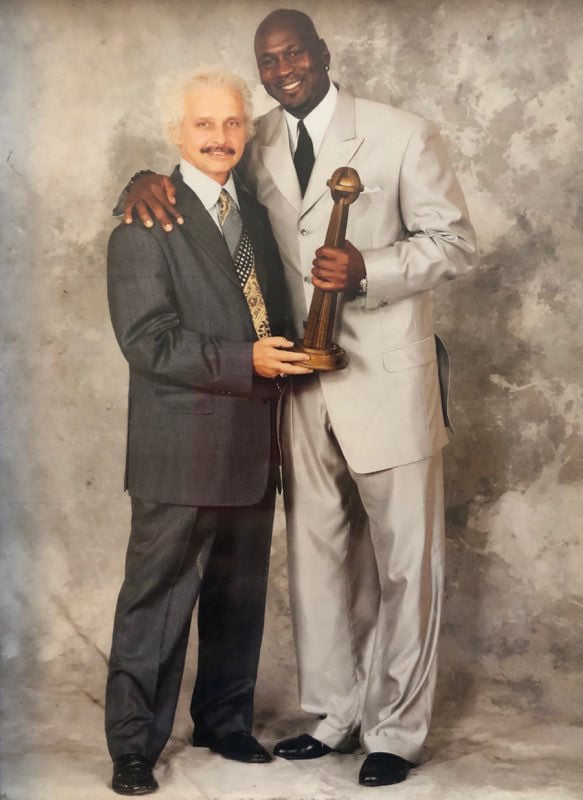 John Wozniak has become an internet sensation in ESPN’s “The Last Dance,” a 10-part docuseries telling the amazing story of Michael Jordan’s career with the Chicago Bulls. 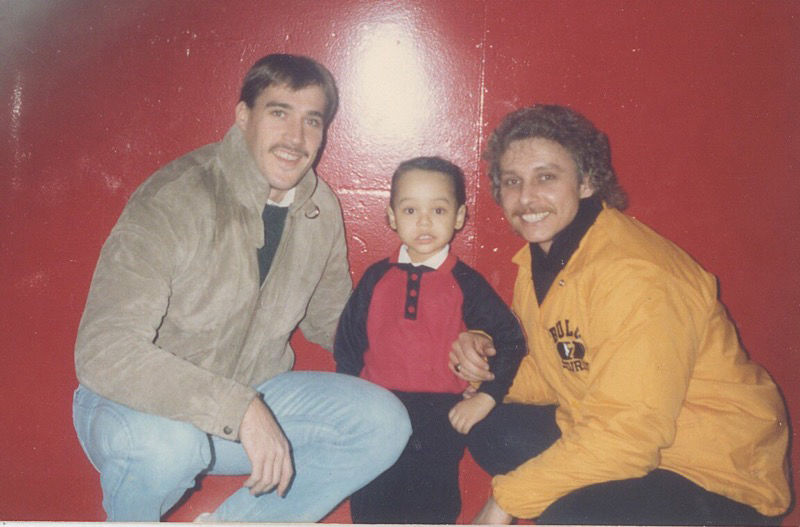 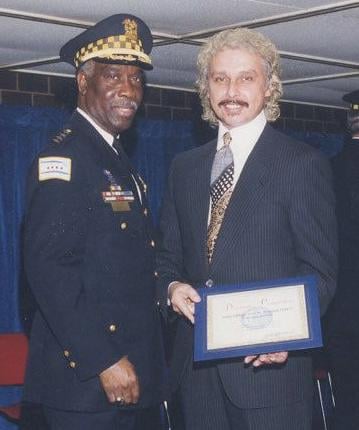 Morgan Park resident John Wozniak was a decorated police officer in the Chicago Police Department. He was a longtime member of Michael Jordan’s security detail. (photos courtesy of the Wozniak Family)

John Wozniak (left) died in January after a battle with colon cancer. His son, Nicholi has seen his father’s memory honored in ESPN’s “The Last Dance.”

John Wozniak has become an internet sensation in ESPN’s “The Last Dance,” a 10-part docuseries telling the amazing story of Michael Jordan’s career with the Chicago Bulls.

Morgan Park resident John Wozniak was a decorated police officer in the Chicago Police Department. He was a longtime member of Michael Jordan’s security detail. (photos courtesy of the Wozniak Family)

The 10-part docuseries details Michael Jordan’s career with the Chicago Bulls, especially the 1997-98 season, and since its premiere in mid-April, “The Last Dance” has taken Bulls fans and the sports world by storm.

However, unlike most fans, Wozniak has a personal connection to MJ.

John Michael Wozniak, Wozniak’s father, was a longtime member of Jordan’s security detail during both Bulls three-peat runs and after Jordan ended his Hall of Fame career.

“My dad started doing security at Chicago Stadium in the 1980s part-time as Michael came into the league,” Nicholi Wozniak said. “From there, he was doing all 41 home games. Then, it became a full-time thing. With the Bulls, playing baseball in Birmingham, my dad was there with him.”

John Wozniak was a longtime Morgan Park resident, and he joined the Chicago Police Department in the mid 1970s. He died on Jan. 18 at age 69 after an 18-month battle with colon cancer.

In awaiting the fifth and sixth episodes on ESPN on May 3, Wozniak was excited to continue watching the docuseries as his dad could be seen in several of the previous broadcasts.

In the first four episodes of “The Last Dance,” behind-the scenes footage shows John, but after the recent episode, John Wozniak has become an Internet sensation.

In footage from the 1997-98 season, the security guard is seen beating Jordan in a game of pitching quarters against a wall in a room at the United Center; whoever got the quarter closest was the winner.

Wozniak beat Jordan, and he celebrated the win with a smiling shrug a la Jordan’s famous shrug against the Portland Trail Blazers in the 1992 NBA Finals.

Unfortunately, Nicholi didn’t see the episode in real-time because heavy winds had knocked out the power to his house.

“The power went out, so I had to watch the encore presentation,” Nicholi said. “I looked at my phone later, and it had blown up. I had probably 20 texts, emojis, all sorts of social media, so I’m thinking, ‘What’s going on?’”

His dad had gone viral as social media exploded with questions about the identity of Jordan’s security guard with the curly, white hair that looked like it had received a perm.

“My dad became a freaking meme,” Nicholi said with a laugh. “That was him. That’s him. He wasn’t acting there.”

John Wozniak’s hair was often a topic of conversation growing up in the Wozniak house. Nicholi said the family always encouraged him to update his hairstyle, but his dad wasn’t hearing that.

“My dad always said, ‘No, this is my mark,’” Nicholi said. “He wasn’t trying to fit in. He was doing his thing. It was his brand, his marketing, and I’ll be damned; he was right. I get it now.”

Nicholi said his dad actually styled his hair after Errol Flynn in the 1939 movie Western “They Died With Their Boots On.”

“He had that curly mullet. He loved it,” Nicholi said.

“Last Dance” Director Jason Hehir said in an interview with ESPN’s “Golic and Wingo” that John Wozniak was interviewed for the docuseries, but those interviews did not make the final cut.

Wozniak continues to be visible in footage throughout the episodes.

Working on Jordan’s security detail through both three-peats and his baseball detour in 1994-95, Wozniak was there through thick and thin.

After Jordan retired, Wozniak still worked for the superstar at his home in Highland Park. As Wozniak battled colon cancer over the last two years, he’d undergo chemotherapy treatments and still make the daily trek up to Highland Park and then back to Morgan Park.

A business relationship at first, the men became good friends over the years.

“Michael is a very good guy,” Nicholi said. “If anything ever happened to a Chicago policeman or a firefighter or anybody, he’d give my dad an autographed ball or something to give to the family. He loved his whole crew and everyone around him.”

Wozniak and fellow CPD officers Gus Lett and Clarence Travis were consistent members of Jordan’s security detail with several other officers rotating in and out over the years.

As Nicholi said, his father considered being a police officer a higher calling.

“To be a police officer, it wasn’t a job for him; it was a calling,” Nicholi said. “I’m so proud of him. My dad was such a dutiful guy. He was the youngest member of the crew. They were always poking each other, inside jokes back and forth.”

Nicholi and his younger brothers, Rocky and Michael, grew up around the Bulls of the 1990s, whether it was watching games at the United Center or enjoying an occasional visit to Jordan’s house.

Now, with “The Last Dance,” Wozniak is savoring the unique opportunity to look back and, more importantly, honor his father.

“It’s really cool to watch it. We’ve been loving it,” Nicholi said. “It’s really helped this shutdown a little bit. It’s cool to know that this is part of my dad’s legacy.

“He always said ‘Do something to leave your mark on life.’ He wanted us to do the same.”