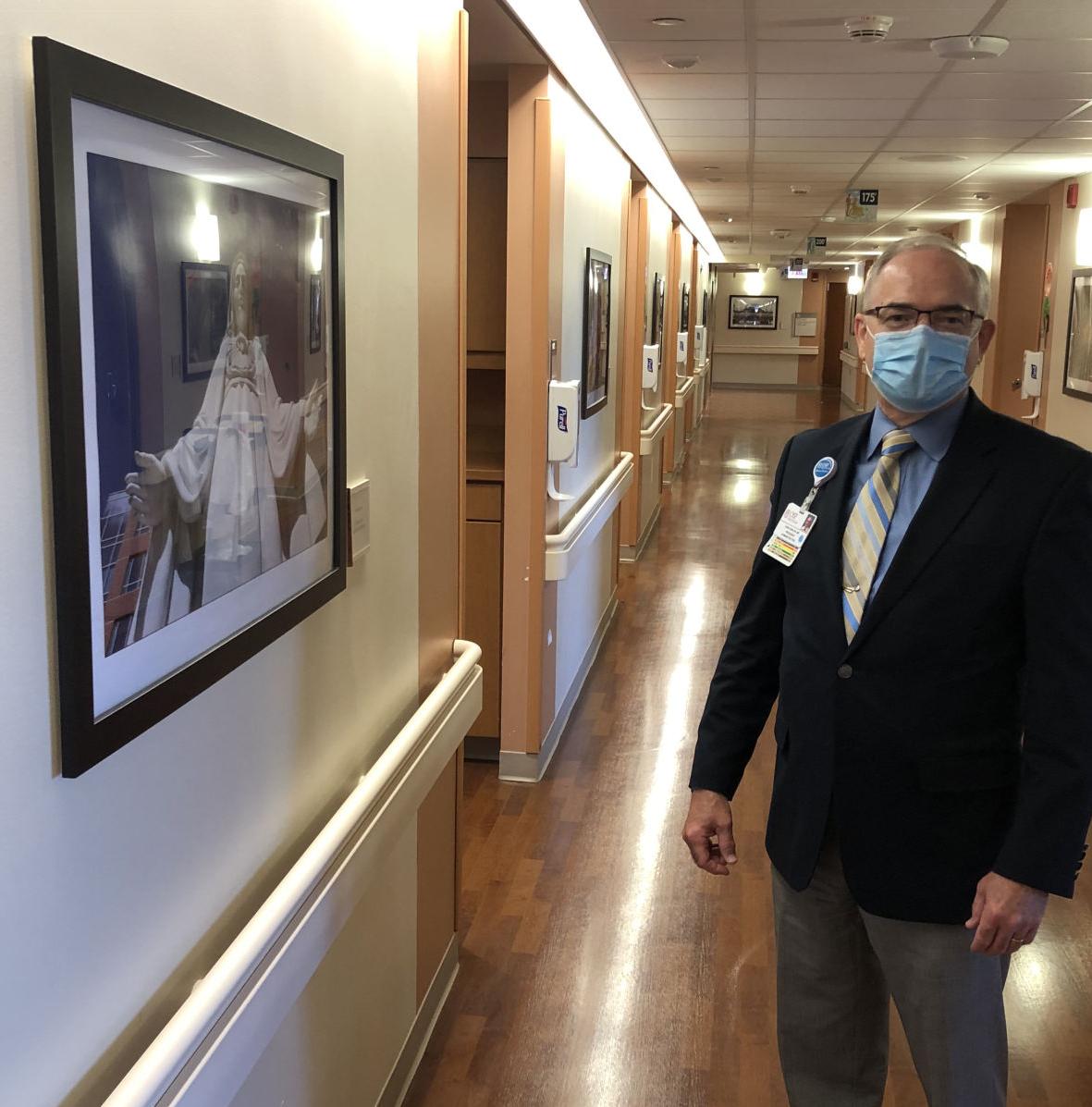 Dr. John Hanlon, a Beverly native, will retire as president of OSF HealthCare Little Company of Mary Medical Center on Friday, July 10, ending more than three decades of service at the hospital. He oversaw Little Company’s merger with OSF, of Peoria, and its care of COVID-19 patients. (Review photo) 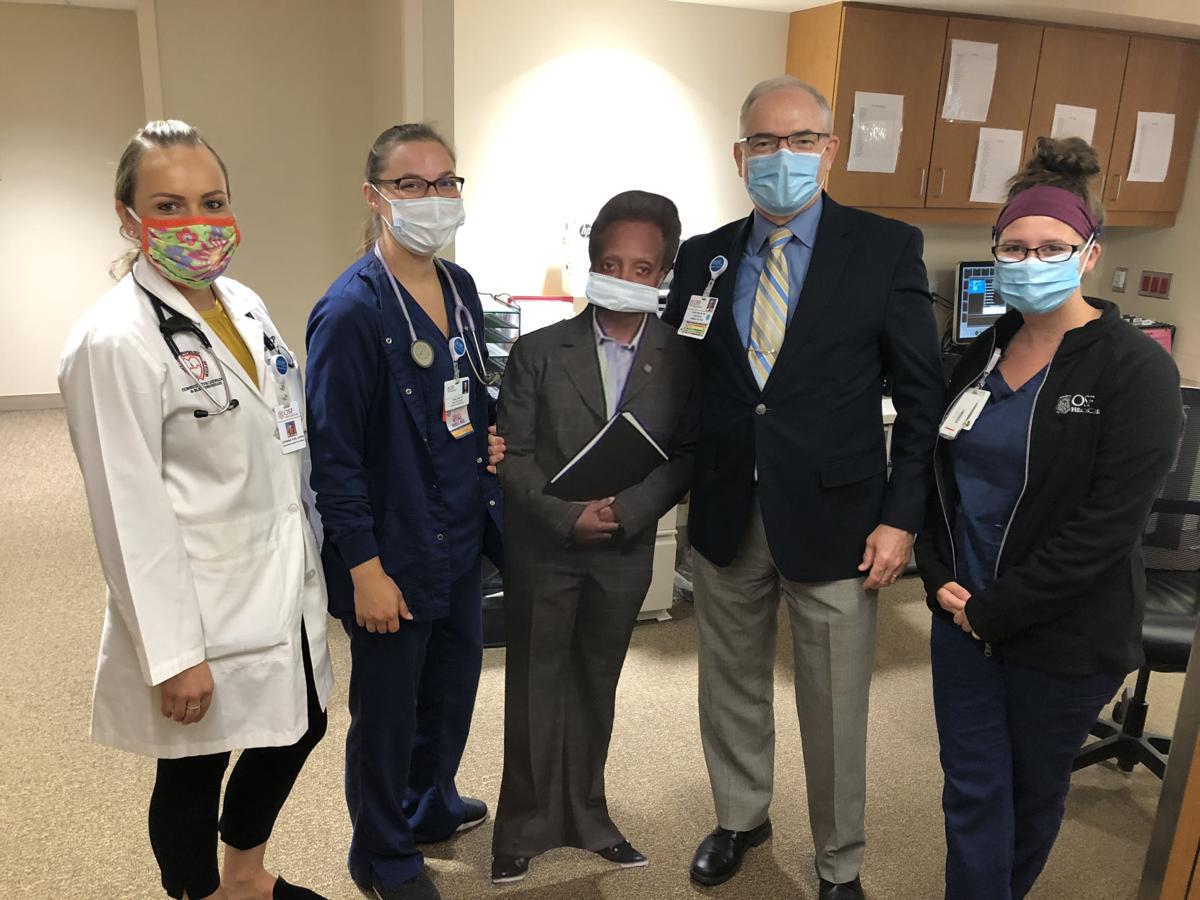 Dr. John Hanlon gathers with OSF-Little Company of Mary nursing staff members—and a cutout of Chicago Mayor Lori Lightfoot—as he makes his rounds at the hospital in early July. While many of his days were filled with meetings, phone calls and answering emails, he said he enjoyed touring the hospital to gain a better sense of its performance.

Dr. John Hanlon, a Beverly native, will retire as president of OSF HealthCare Little Company of Mary Medical Center on Friday, July 10, ending more than three decades of service at the hospital. He oversaw Little Company’s merger with OSF, of Peoria, and its care of COVID-19 patients. (Review photo)

Dr. John Hanlon gathers with OSF-Little Company of Mary nursing staff members—and a cutout of Chicago Mayor Lori Lightfoot—as he makes his rounds at the hospital in early July. While many of his days were filled with meetings, phone calls and answering emails, he said he enjoyed touring the hospital to gain a better sense of its performance.

Dr. John Hanlon’s two-year tenure as president of Little Company of Mary Hospital (LCMH) was certainly more eventful than he ever could have imagined.

He oversaw the merger of LCMH with OSF HealthCare, of Peoria, and just when that merger came to be, the COVID-19 pandemic struck.

Hanlon, a Beverly native who worked at LCMH for over 30 years, is now retiring, and his last day on the job will be Friday, July 10.

As he prepares to step back, Hanlon said he is proud of an improved culture at the hospital and the quality care it provides.

“We had a few goals I’d set up when I took this position in 2018, and my main one was to see if we could set up a culture of quality improvement—a patient-centered culture and a much more collaborative culture amongst the administration and the managers,” Hanlon said. “I think we really we’ve accomplished all those things. It’s a much more open, transparent and communicative administration.”

Hanlon, now a Burr Ridge resident, has served as president of the hospital since August 2018. He began working there in 1987 and has been an ophthalmologist for 30 years.

He became president of the medical staff in 2000 and was also chief medical officer before becoming LCMH president.

He took over presidential duties at the hospital about six months after LCMH’s failed merger with the Rush health system. The hospital was losing $40 million a year, Hanlon said, and after addressing financial struggles, then considering other systems to partner with, LCMH announced an expected merger with OSF HealthCare in July 2019.

The agreement became official in October, and the merger went into effect on Feb. 1. The hospital is now called OSF HealthCare Little Company of Mary Medical Center.

Hanlon is happy with how the early stages of the relationship have progressed.

“The merger itself has been excellent,” Hanlon said. “We are very happy with the partner we found in OSF. They are aligned with our mission; they’re aligned with our values; they are sensitive to our needs up here. They’re based out of Peoria; but this is their first foray into the metropolitan area, and they’re aware of how different that is from everything they do.”

The one “problem” that arose during the merger, Hanlon said, came when the public health crisis erupted.

Usually, officials would like 90 days “to iron out all the kinks” of a merger, Hanlon said. But on Friday, March 13, the hospital had its first COVID-19 case.

Patients were “so sick,” Hanlon said, and the demand for staff and resources skyrocketed. People were concerned about their health.

“The demand on our [staff] was intense,” Hanlon said. “In the early phases of the pandemic, a lot of people thought, ‘Well, gee, you get COVID; that’s a death sentence,’ and that just wasn’t true. The important thing was to get that message across to people that, look, 80 percent of the people with this disease either have no symptoms or mild symptoms. It’s a much smaller percentage that gets hospitalized. So, part of it was educating our own people; part of it was educating the public.”

The hospital also needed to increase its supply of medical equipment, Hanlon said. Normally, about 12 patients are on ventilators at one time.

However, at one point in April, 26 patients needed them.

Hanlon said OSF was supportive in keeping the hospital prepared.

“We had to get [staff]; we had to get ventilators—OSF was instrumental in that,” Hanlon said. “They’ve sent over 100 of their employees up here, including doctors, respiratory therapists, nurses, registrars, people who could just take care of the increased load.”

Every staff member stepped up, Hanlon said. Medical officials learned that COVID-19 patients would recover better lying on their stomachs, so physical therapists were called in to help patients change positions.

LCMH also opened up its emergency department, which is undergoing an extensive three-phase renovation, in the early spring. Phase 1, in which the hospital constructed new rooms, was completed in early March, but Phase 2 called for the demolition of old rooms. Hospital officials delayed that work to reserve space for COVID-19 patients.

The emergency department is now a hybrid space, with new and old rooms, though Phase 2 of the renovation has now re-started.

“Our people were absolute soldiers about this stuff. It was just so impressive,” Hanlon said. “And frankly, I’m glad I was here to see it. I think being able to see that part of our people—just quiet courage. They just did their jobs. I’d go through the [intensive care unit], and people were just doing their work. It was really incredible. The [emergency department], same way.”

Hanlon was busy with meetings, emails and phone calls as president, but he said he enjoyed making the rounds every day to see first hand how the hospital was operating.

During retirement, he said, he wants to read, do some writing and gardening, and spend time with his grandchildren. He also loves traveling, although that is limited due to the pandemic.

He said he is most proud of the work environment and culture changing at LCMH during his tenure.

“I really think that’s important,” Hanlon said. “I think that’s probably one of the hardest things you can do in an organization is to change a culture, and we became a culture of open communication.”