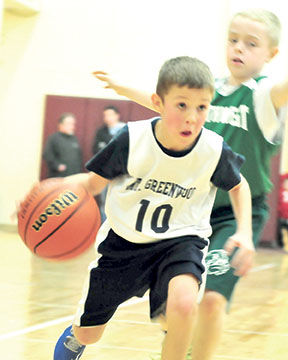 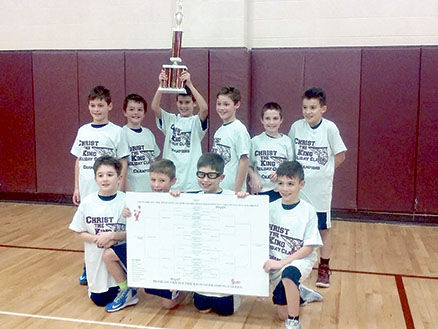 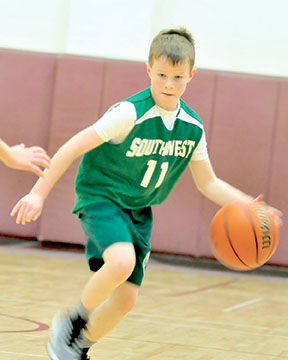 Southwest guard Rowan Smyth penetrates into the lane in the first half against Mt. Greenwood-Blue. Smyth finished with 8 points to lead the Bulldogs. (Review photo)

Southwest guard Rowan Smyth penetrates into the lane in the first half against Mt. Greenwood-Blue. Smyth finished with 8 points to lead the Bulldogs. (Review photo)

For many schools, a holiday tournament championship might be a case of the same-old, same-old, ho-hum victory.

But for Mt. Greenwood Elementary, its first was sweet.

“This means a lot because it is the first. I’ve been there nine years since we started,” Coach Tom Justic said. “To me, the boys, the school, this is big and means a lot for everyone. It’s very cool. Nine years we’ve been waiting, so we’re very excited.”

Max Justic (13 points) and John Mikrut (11) had double-digit efforts to lead the way to the championship for the Eagles. Zach Mikrut (4 points), Mike Barry (2), Dylan Sonne (2) and Thomas Demro (1) all contributed in the win.

“What the guys do best is play as a team. Our passing is unbelievable,” said Coach Justic. “I’ve never seen a team at this level pass like this. They’re unselfish and always looking out for each other and playing great defense. That was the difference in the whole tournament.”

Strong passing and an ability to run the floor powered Mt. Greenwood-Blue to a big first-half lead as John Mikrut and Max Justic led the charge.

Zach Mikrut hit an early baseline jumper with John Mikrut scoring on a putback. Off a 4-4 tie, the Eagles scored 13 straight points to go up 17-4 late in the first half.

Four players scored as part of the spurt with Max Justic’s putback on a fast break capping things off. Mt. Greenwood led 19-8 at halftime.

“It’s gotten better and better, and they always know where their teammates are,” Coach Justic said. “That’s the key. They rely on that. Southwest was tough, but we were trying to get the ball up the court and score on the fast break.”

Down but not out, a feisty Southwest team trailed by as many as 17 points in the second half. With Pierce scoring five points late and Maloney, Keyser and Smyth scoring, the Bulldogs drew to within 12 points in the closing minutes.

“We’re down double-digits, but we played hard both halves,” Southwest Coach Dan Maloney said. “To finish second out of 24 teams, we’re happy with a good tournament.”

Southwest’s regular schedule only had 12 games, but the local holiday tournament enabled the team to play five more in a quick timeframe.

“We were hustling,” Maloney said. “This is a good group. We’re lucky to have them, and they’re going to keep getting better. Kudos to Christ the King for running a great tournament.”

Justic is joined on the coaching staff by Joann Barry.

Southwest beat Morgan Park Academy, St. John Fisher Blue, Our Lady of the Ridge and Bridgeport Catholic Academy to advance to the championship.

Maloney, Mark Smyth and Steve Kmak are also on the coaching staff.