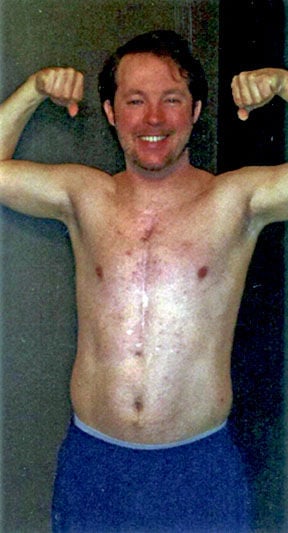 Ryan Rusch, 23, proudly displays the scar that is a result of heart surgery. He has endured six heart surgeries, but he remains strong and is now raising funds for the “Roar and Walk for Little Hearts.” Proceeds benefit Mended Hearts of Chicago. 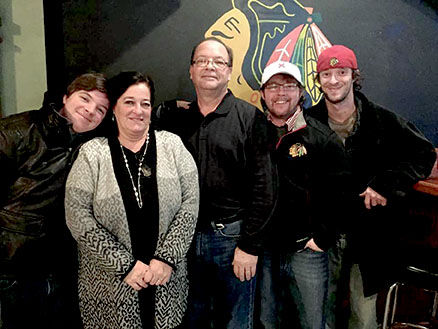 Ryan Rusch (second from right) battles truncus arteriosus, a congenital heart defect. Despite his challenges, he has traveled around the Chicago area to visit with others suffering from heart problems. He is supported in his efforts by his family, which includes his brother Cody (from left), mother Joanne, father Michael and brother Adam. By participating in the “Roar and Walk for Little Hearts” on May 15, Ryan seeks to raise awareness about people dealing with heart issues, which he said are not sufficiently publicized because they are not as visible as other health issues.

Ryan Rusch, 23, proudly displays the scar that is a result of heart surgery. He has endured six heart surgeries, but he remains strong and is now raising funds for the “Roar and Walk for Little Hearts.” Proceeds benefit Mended Hearts of Chicago.

Ryan Rusch (second from right) battles truncus arteriosus, a congenital heart defect. Despite his challenges, he has traveled around the Chicago area to visit with others suffering from heart problems. He is supported in his efforts by his family, which includes his brother Cody (from left), mother Joanne, father Michael and brother Adam. By participating in the “Roar and Walk for Little Hearts” on May 15, Ryan seeks to raise awareness about people dealing with heart issues, which he said are not sufficiently publicized because they are not as visible as other health issues.

Ryan Rusch has experienced his share of heart problems. Six surgeries, to be exact, have forced frightening detours as he’s grown into adulthood.

However, there’s no doubting that the 23-year-old Beverly resident has a heart of gold.

To make matters worse, in 2006, Rusch was the victim of a crime that shocked the neighborhood, as he was assaulted and robbed at Beverly Park in a crime that left him with a traumatic brain injury.

Rusch’s goal now, he said, is to raise awareness for congenital heart defects, and he’s hard at work to do it.

On May 15, he will participate in the fourth annual “Roar and Walk for Little Hearts,” an event at Moraine Valley Community College that benefits Mended Little Hearts of Chicago, a non-profit organization that Rusch has worked closely with for about three months.

As he strives to raise money for the event, Rusch wants people to know that while others might look just like everyone else, they could be experiencing health problems that deeply impact their lives.

“The word that I always come up with is ‘mindboggling,’” Rusch said of his condition. “You feel fine, but you don’t feel fine. It’s weird. It’s hard to explain, but living with my condition has always been complicated.”

According to his mother, Joanne, Rusch’s surgeries started when he was about 2 months old—doctors had to wait to operate, she said, because he was born prematurely.

Rusch, he said, has two options for addressing his heart condition. One is to have a mechanical valve inserted that would last longer but limit how active he can be.

He chose instead to receive a tissue valve, which doesn’t last as long but keeps him “physically able to do a lot.”

Rusch said he feels blessed to have Dr. Michel Ilbawi, of Advocate Children’s Hospital in Oak Lawn, operate on him—“To me, he’s God”—but each surgery frightens him.

“In surgery, it’s 50/50,” Rusch said. “Either you’re going to die, or there’s complications if you do kick through. Luckily, I’ve been blessed enough through six; I have not had any terrible physical issues, thank goodness.”

Recently, Rusch visited the hospital with an elevated heart rate and learned that if he had waited any longer to get to the hospital, he might have suffered a stroke. Such health issues, he said, keep him focused on enjoying one day at a time.

“When people ask where do you see yourself in five, 10 years—I look at my life in two years,” Rusch said. “Am I going to be there two years from now?”

Growing up hasn’t been easy, Rusch said, as he’s been in and out of the hospital since he was a student at St. John Fisher (SJF) Elementary School.

However, football has provided an outlet. Rusch never played, but he was a manager for SJF’s team, then for St. Rita High School. His mother credited local resident John Hooker with providing opportunities.

“When I did football, it was the only thing that made me feel normal. It got my mind off everything,” Rusch said. “It kept me busy. I didn’t think about anything bad. … I became part of the group.”

The Beverly Park attack, in which three teens were charged with robbery and aggravated battery, created more challenges, although Rusch doesn’t want to be known as the kid who was assaulted at a park.

The beating left Rusch with brain injuries that still create learning problems, but after graduating from St. Rita, he attended Butler Community College in El Dorado, Kansas, then Parkland College in Champaign. He then enrolled at the University of Alabama.

Rusch enjoyed himself at Alabama, even appearing in the front row of the crowd during a taping of “College Gameday,” the popular ESPN television show that visits campuses for big football games. He also shook hands, he said, with revered Alabama Coach Nick Saban at church.

Health problems also arose during college. After an emergency phone call to his mom from Parkland College, she rushed to Champaign to be with her son. She said seeing him was “like looking at death.”

During an episode at home, he said, he began sweating profusely, vomited and then lost his vision.

Rusch had trouble staying focused at Alabama, and that “tore me from the inside out,” he said. He returned home last fall.

He hasn’t undergone a surgery in a few years, but as he’s grown older, he realizes the severity of each procedure.

“That could be the last time I see my mom, my dad [Michael],” Rusch said. “The last thing I could see is a light bulb over my head. Now, if you do that more than once—it’s ridiculous. And then when I do wake up, when I recover or whatever, I usually give myself a day—‘Is this real?’”

The first thing Rusch says when he wakes up from a surgery, his mom said, is “I’m sorry” to his father.

He and his mother also work with visitors at Park Lawn, an Oak Lawn facility that aids people with physical and mental disabilities. On Valentine’s Day, they joined individuals at Park Lawn for dinner. They also want to form support groups for families dealing with issues like Ryan’s.

Rusch has blunt advice for anyone with a pulse.

“Check your heart, no matter what,” Rusch said, “if it’s healthy, broken, whatever.”

Today, Rusch is enrolled at classes at Second City, delving into improvisational comedy at what he calls “the most positive building in America.” He has other hobbies, he said, but he’s excited to see where Second City will take him.

“Without it, I don’t know what I’d be doing,” Rusch said. “I’d probably still be at home, drawing, which isn’t a bad thing.”

As he prepares for the Mended Little Hearts fundraiser, Rusch has one request for participants: wear red. He wants to bring people together, he said, and raise awareness.

Rusch, his mother said, is the “nicest kid in the world.” He wants to graduate college to inspire his younger brother, Cody, and he’s looking forward to a cousin’s wedding in June.

Although life has been difficult, Rusch said, he feels lucky that he persevered and has been able to live and get to know his parents and family.

His parents have helped him recuperate from each surgery, but Joanne said the way her son handles each operation is most impressive.

The Roar and Walk for Little Hearts begins at 9 a.m. on May 15 at the Moraine Valley Community College soccer field, 9000 W. College Pkwy., in Palos Hills.

To register or make a donation, visit the Web site at crowdrise.com/walkforlittlehearts.