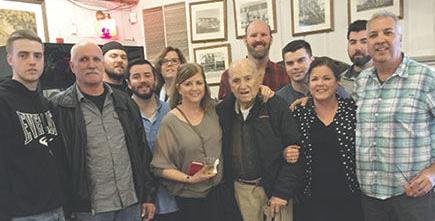 Ed Heywood (third from right) enjoys a moment with his family, which included nine children, 25 grandchildren and 19 great-grandchildren. Heywood, a longtime local resident, died on Dec. 20 at 97. He owned several apartment buildings in the community and was known for helping others. 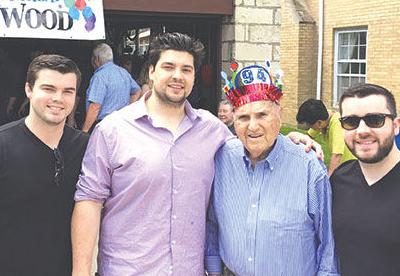 Heywood celebrates his 94th birthday with his grandsons John Coogan, Steve Heywood and Luke Coogan. After growing up in poor conditions, Ed was dedicated to providing the best for his family. 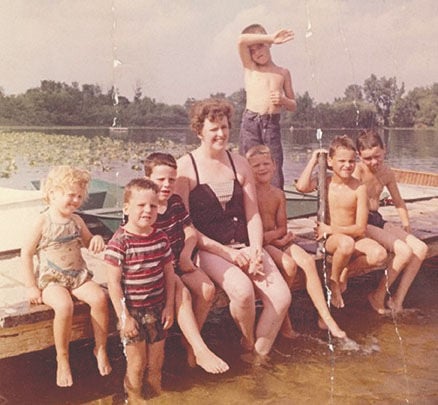 Heywood’s family enjoys a trip to Saugany Lake in Rolling Prairie, Ind., in the 1960s. It was one of his favorite places to swim, according to his daughter Loretto Coogan. 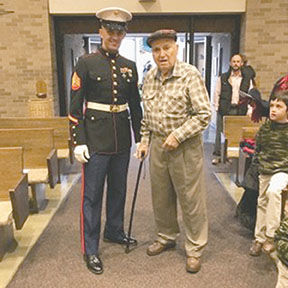 Ed Heywood (third from right) enjoys a moment with his family, which included nine children, 25 grandchildren and 19 great-grandchildren. Heywood, a longtime local resident, died on Dec. 20 at 97. He owned several apartment buildings in the community and was known for helping others.

Heywood celebrates his 94th birthday with his grandsons John Coogan, Steve Heywood and Luke Coogan. After growing up in poor conditions, Ed was dedicated to providing the best for his family.

Heywood’s family enjoys a trip to Saugany Lake in Rolling Prairie, Ind., in the 1960s. It was one of his favorite places to swim, according to his daughter Loretto Coogan.

As friends and family mourn Ed Heywood, a longtime Beverly/Morgan Park resident who died on Dec. 20 at age 97, they remember a life that is a classic tale of rags to riches.

Heywood grew up in near poverty, but he went on to build a successful career in real estate. Throughout that career, he always made sure to give back to the community.

As the owner of several residential multi-unit apartment buildings in Beverly/Morgan Park, he was known for his strong work ethic, devotion to his family and loyalty to his neighborhood.

“He ended up giving to almost every grammar school and every high school in this neighborhood,” said Loretto Coogan, one of his nine children. “He became generous because he came from nothing. … He believed in the community.”

Heywood owned buildings located in areas ranging from East Beverly to the western part of Morgan Park. His career in real estate began after moving to Mt. Greenwood in the spring of 1946, when he answered a classified ad in a newspaper seeking a salesman.

The early years of his career were difficult, Coogan said, but Heywood’s business eventually thrived.

He opened his own office at 111th Street and Troy Avenue, and he became friends with Dr. Ernie Havrilla, an optometrist in Mt. Greenwood who encouraged him to purchase local properties. Heywood became a house flipper, with his entire family, including his children, fixing up homes and doing jobs such as tearing up tiles, painting and shoveling snow off roofs.

When Beverly/Morgan Park experienced the effects of white flight in the 1970s, instead of following people to the suburbs, Heywood remained in the neighborhood.

Despite his seemingly tough demeanor, Heywood had a soft heart, Coogan said, and would often give tenants a break on their rent if they worked to clean up around the building.

Havrilla died last May, and his wife, Janet Havrilla, said he and Heywood enjoyed a long friendship that included sailing and vacationing in Mexico.

As the two friends aged, they telephoned each other frequently, and Heywood continued to call Janet after Ernie’s death.

“He was a very nice, soft-spoken man,” Janet Havrilla said. “Every two weeks, we would check on each other—‘How are you feeling? What are you doing?’”

Heywood’s real estate career was an important chapter of his life, his daughter said, but his love of family was even bigger.

He and his first wife, Mary Margaret Hanlon, had nine children in 11 years. They raised their kids in Morgan Park, and all of them attended St. Cajetan Elementary School. The boys attended Marist High School, and the girls attended the now-closed Mother of Sorrows High School in Blue Island.

Hanlon’s mother also lived with the family, and Heywood always made ends meet for everyone in the house. He would joke that he was like Jesus dividing loaves of bread but finding enough for everyone, and he would take a gallon of milk and, using instant milk powder, turn it into four more gallons.

“He was an excellent cook,” Coogan said. “We used to tell him that he was the healthiest one out of the whole bunch.”

Heywood was an attentive father who, despite a busy work schedule, was still busy changing diapers and caring for his children, Coogan said.

His own childhood was difficult.

Heywood was born on June 9, 1922, at Jackson Park Hospital and Medical Center. His father, Edgar Heywood, was an immigrant from England, and his mother, Sarah Clark, came from Ireland.

The family once lived on 55th Street and Hoyne Avenue, in the parish of St. Basil Roman Catholic Church, but they lost their home in the Great Depression in the late 1920s. The family moved into a four-room flat, where Heywood had to insert coins into a meter to keep the electricity on.

Heywood’s mother cleaned houses for a living, and he often helped. He graduated from St. Theodore Elementary School and Harper High School, both on the South Side, and he began a job in a cotton mill.

After the attack on Pearl Harbor, Heywood joined the U.S. Army Air Corps and served in the Pacific.

When he returned and moved to the neighborhood, he became active in many social events, and the annual Kennedy Park water carnival was among his favorites. Heywood quietly purchased trophies for the winners of swimming events, which Coogan didn’t learn about until the 1980s.

Many of Heywood’s sons followed him into real estate and owned local properties. Tragedy struck the family when his son, Brian, was found fatally shot in one of his apartment buildings in south suburban Calumet City in 2003. The case remains unsolved.

Brian’s death devastated his father, but Ed Heywood enjoyed many memorable moments despite that heartache, including an annual birthday party with his extended family—photos of which were submitted each year to The Beverly Review. He married his second wife, Margaret, in 1998.

Heywood, who was living in North Beverly, was also recognized in 2017 at a ceremony at St. Barnabas Roman Catholic Church to honor war veterans.

Heywood was a past president of the South Suburban Real Estate Board, and he was a member of Evergreen Park American Legion Post 854 and Fr. Perez Knights of Columbus.

He remained sharp and active in his final days, his daughter said, even walking eight laps around the track at St. Xavier University’s Shannon Center.

The work ethic Heywood developed at a young age led to a long, successful life.

“I think he was proud that he made something out of nothing,” Coogan said. “He believed everybody could do it if they just kept their nose to the grindstone.”