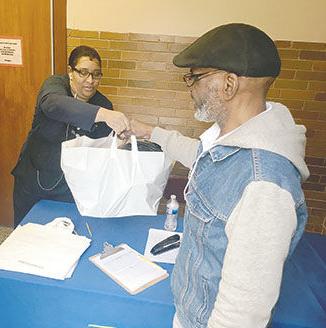 Sutherland Elementary School Lunchroom Manager Kim Williams distributes three days of meals to a visitor as part of a service Chicago Public Schools (CPS) has provided for families since schools were closed beginning March 17 in the wake of COVID-19 spreading throughout the state. Mayor Lori Lightfoot announced that CPS schools will remain closed through April 20. 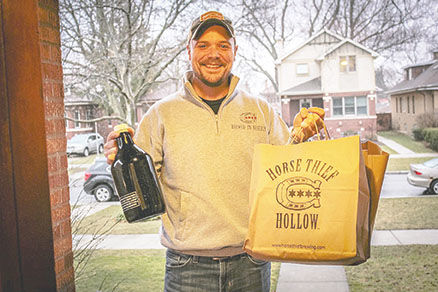 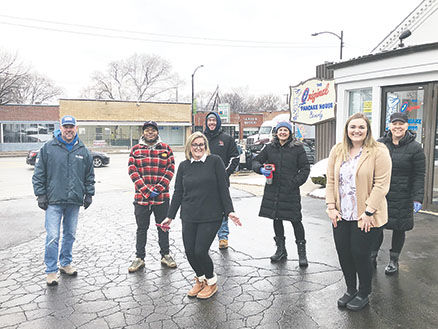 19th Ward Ald. Matt O'Shea (left) teamed up with The Original Pancake House-Beverly and operator Julie Harrigan Wagner (center) to deliver over 100 breakfasts to senior citizens ages 65 and over this morning, March 23. Local residents and police officers lined up in their vehicles outside the restaurant, waited for orders to be brought out, then headed out to make their deliveries. 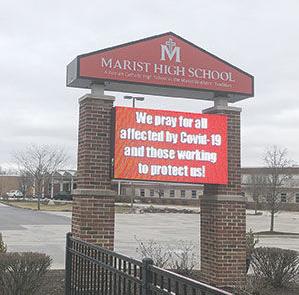 Sutherland Elementary School Lunchroom Manager Kim Williams distributes three days of meals to a visitor as part of a service Chicago Public Schools (CPS) has provided for families since schools were closed beginning March 17 in the wake of COVID-19 spreading throughout the state. Mayor Lori Lightfoot announced that CPS schools will remain closed through April 20.

19th Ward Ald. Matt O'Shea (left) teamed up with The Original Pancake House-Beverly and operator Julie Harrigan Wagner (center) to deliver over 100 breakfasts to senior citizens ages 65 and over this morning, March 23. Local residents and police officers lined up in their vehicles outside the restaurant, waited for orders to be brought out, then headed out to make their deliveries.

As positive diagnoses of the novel coronavirus known as Covid-19 continued to spread throughout the United States, Gov. J.B. Pritzker issued a “stay at home” order across the state that went into effect at 5 p.m. on March 21 and is scheduled to last until the end of the day on April 7.

Pritzker said he plans to keep such entities open throughout the virus ordeal.

Mayor Lori Lightfoot announced that Chicago Public Schools (CPS) will be closed through April 20, and Pritzker said other schools in the state are tentatively scheduled to re-open on April 8.

Bars and restaurants continue to offer only carryout, delivery and curbside pickup services.

Pritzker said he was leaning on the “bedrock” of science in issuing the order.

In Chicago, Lightfoot said, public transportation and airports will remain open, and garbage will still be collected. Public libraries are closed, as are fieldhouses and playlots at parks.

Lightfoot and Pritzker stressed that retail stores will be well stocked and shoppers should not “hoard” products.

Residents should maintain a social distance of 6 feet, but they can still go outside and walk around their neighborhoods.

“This is not a lockdown or martial law,” Lightfoot said. “There’s no need to change your normal purchasing patterns.”

CPS schools were originally set to be closed from March 17-30, and Archdiocese of Chicago schools have been closed since March 16.

Students have been assigned e-learning lessons, with teachers and administrators often posting videos on social media and checking in on their pupils.

Amy Morrow, of Beverly, is the parent of twin kindergarten students at Sutherland Elementary School. She regularly works from home, but her husband, Terry Morrow, is a CPS teacher and is now home with her—as are their children, Mickey and Freddie.

The youngsters are on a “very strict schedule,” she said, and the family tries to remain in touch with teachers and classmates as much as possible.

The twins are in separate classes, and on March 20, Morrow organized a virtual show-and-tell lesson for both classes using the Zoom smartphone application. Nine students in each class participated, and one teacher was also involved.

“The kids absolutely loved it,” Morrow said. “It was the coolest thing ever. All day, they were excited to get to that point. So, it was really fun to be able to do it.”

She said that, in honor of St. Patrick’s Day, her sons and other children on the block went on a scavenger hunt looking for shamrocks in residents’ windows. They’ll have another hunt soon looking for rainbows and are asking neighbors to join the fun.

Her children are also conducting “data collection” in their home, she said, and taking inventory on the number of door knobs and pieces of furniture that have legs.

She and other parents on her block are allowing children to play outside and ride their bikes; but they’re not allowed to share bikes, and they must keep their distance from each other.

Morrow said teachers are trying to stay connected with students, and she credited Sutherland administration for distributing two weeks of assignments the day before CPS closed.

“They had it prepared for every single student,” she said. “It was amazing.”

Morrow said she and her husband are also helping his students, many of whom are from low-income families, by directing them to available resources.

CPS has provided free food boxes for families at all school locations since the closure, and the packages contain three days of breakfast and lunch for every student in the household.

CPS CEO Janice Jackson said in a release that the district will seek a one-year waiver from the state board of education on the CPD school-quality rating policy; instead, officials will recommend to the Chicago Board of Education that schools maintain their current ratings into next school year.

Some end-of-year assessments are canceled, Jackson said, and CPS officials are evaluating how the closure will affect other assessments.

CTU President Jesse Sharkey said he was told employees will receive full pay during the closure.

“While we want to re-open schools as soon as possible, this is a very serious challenge, and we support the mayor’s decision to prioritize the health and well-being of our city,” Jackson said. “As the situation develops, we will continue to provide families with regular updates.

“We recognize the significant impact the closures have had on every member of our school community, and we remain committed to doing all we can to support our students and families in the days ahead.”

Local bars and restaurants have adjusted their services in order to generate revenue.

With dine-in services not allowed, owners promoted their carryout and delivery services on social media and with large signage on their front windows.

They are also supporting one another and local residents.

On March 20, Nicky’s Grill and Yogurt Oasis in Beverly offered free meals to employees in the hospitality industry who were out of work.

Owner Paul Kostopanagiotou said the promotion was in line with his business model.

“We built a business on spreading goodwill, and this is just another example of that,” Kostopanagiotou said. “When things do return back to normal, I feel that it’s appreciated that we do it.”

Nicky’s is only offering carryout, and Kostopanagiotou said customers have been generous in placing money in the tip jar.

Still, he said, the restricted services have “a huge impact on business.”

He had anticipated being shut down entirely, and he was worried about his staff.

“It’s tough on everybody,” he said. “I think about my guys, and depending on how long that will go for and what a layoff would mean to them, how long they can sustain. I’ll try to stay open as long as possible.”

In Mt. Greenwood, Diggity Dogs, a hot dog and burger stand, also made due. Owner Lisa Kazimierczuk removed the stools near a dining counter, and she is allowing only four customers in at a time to allow for safe social distancing.

She is offering carryout and delivery.

She said when the ban on dine-in service began, there appeared to be some confusion, as customers parked outside and waited for an employee to come out and take their order, not realizing customers could still come inside.

Still, Kazimierczuk said, customers have come in offering support, and she said feels lucky to have a business in “a great community.”

Earlier in the week, real estate agent Rhett Graves, of Mt. Greenwood, purchased 25 gifts cards from local restaurants, then gave them away through a Facebook raffle.

O’Shea and OPH are also delivering breakfasts to staff at Advocate Christ Medical Center on March 25, and they are hosting a GoFundMe online fundraiser to distribute meals to those staff members every week with the help of local businesses.

O’Shea is also partnering with Franconello Italian Restaurant in Beverly to provide free meals to 100 seniors on Friday, March 27.

He also plans to donate meals to first responders.

O’Shea said the response from volunteers has been “overwhelming.”

“We have over 30 volunteers here [on March 23] waiting to deliver meals to people in need,” O’Shea. “It’s unbelievable. It’s who we are as a community. I’m so proud to represent Beverly, Morgan Park and Mt. Greenwood.”

He advised residents not to panic and to heed the advice of medical professionals.

O’Shea and OPH have teamed for up charitable causes before, as he and OPH Director of Operations Julie Harrigan Wagner have been friends since childhood.

Wagner said she called O’Shea to address any needs in the community and “rise to the occasion.”

A free breakfast for seniors sounded perfect, to the tune of 600 pancakes, 360 sausage links and 20 gallons of syrup.

Residents and local police officers delivered the meals, lining up outside the restaurant in their vehicles to drop them off at homes.

“People have supported us here at the pancake house for 55 years,” Wagner said, “and it was time to find those people and give them the support they need back.”

The pancake house is still offering carryout, but Wagner admitted the current situation is difficult.

“I have a lot of employees that currently aren’t able to work, especially servers, who work on those tipped wages,” Wagner said. “But, I’ve got six or eight people who are rotating into the mix on and off. We’re keeping a third of our people employed. It’s tough, but every little bit helps.”

Lightfoot announced the Chicago Small Business Resiliency Loan Fund on March 19. It will start with over $100 million in low-interest loans to “severely impacted” small businesses. Funding, she said, came from a $25-million grant from the city, $50 million from the Chicago Community Catalyst Fund and $10 million from Goldman Sachs Urban Investment Group.

Lightfoot also said the due dates for small business’ payments for taxes on bottled water, checkout-bag, amusement, hotel accommodation, restaurant and parking were pushed back to April 30.

Pritzker announced that small- and medium-sized bars and restaurants were permitted a two-month delay in sales-tax payments to the state and local jurisdictions. Late-filing fees and interest were waived starting on March 20.

As of press time, nine people in Illinois had died of covid-19, a respiratory illness that was first diagnosed in China on Dec. 31. Over 1,000 have been positively diagnosed in Illinois.

The disease can be spread through an infected person coughing, sneezing or shaking hands with someone.

The western suburb of Oak Park was placed under a “shelter in place” order on March 20 after two doctors at Rush Oak Park Hospital tested positive.

The entire state is now under the same order.