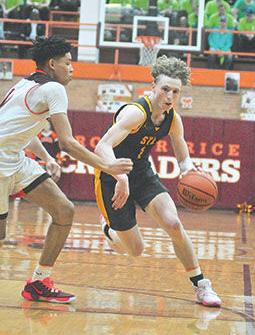 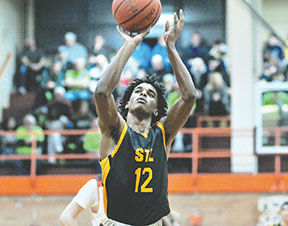 Junior guard Aaron Wofford hits a fourth-quarter free throw. The Vikings went 11 of 12 at the charity stripe in the fourth. (Review photo) 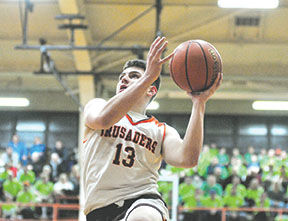 Junior guard Aaron Wofford hits a fourth-quarter free throw. The Vikings went 11 of 12 at the charity stripe in the fourth. (Review photo)

In recent weeks, senior guard Finn Walsh had seen St. Laurence come up on the losing end of two buzzer-beaters and a handful of other heartbreakers.

The Vikings needed a boost of energy, especially with the state playoffs around the corner.

They got one at rival Br. Rice on Feb. 21 in Chicago Catholic League-Blue action when Walsh and St. Laurence grinded out an old-fashioned 61-55 victory.

“It’s tough, but the coaches always say ‘You create your own luck,’” Walsh said. “We try and work hard every day, be better and not put ourselves into those positions where we lose the game on a buzzer beater.”

St. Laurence typically relies on a lightning-paced offense built around fast breaks and 3-pointers. But, as the team struggled with those tough losses, its attention has turned to mixing things up.

“We’ve lost some late leads because we haven’t been grinding out wins,” said Coach Jim Sexton. “We’ve been working on grinding more, not stalling, but running a good offense and still getting a good shot.”

In a 35-35 tie in the third quarter, the Vikings took control. Lenard and Walsh drilled 3-pointers; Wofford scored on a hard drive; and Davis connected on a pull-up floater in the lane.

To open the fourth, Wofford gave the Vikings the lead for good by scoring back-to-back buckets. He hit a runner and scored on a fast break off a Wilson steal to put St. Laurence up 50-40 with 6:53 remaining.

Wofford, a 6’1” junior, is usually the first player off the bench for the Vikings.

“When I come into the game, I look to give the team energy,” Wofford said. “I push to get those boards and get those opportunities we missed on offense and defense. You do what you need to get the next win.”

St. Laurence hit 11 of 12 free throws in the fourth, including Walsh nailing 5 of 6.

“Basketball is just rolling with the punches,” Walsh said. “Whatever they do, you try your best to react. Get as many stops as you can, and with our offensive firepower, it’s hard to stop. We like to wear teams down, speed them up and get them tired.”

St. Laurence has lost 5 games by 4 points or less.

“The way we’ve been going with some tough losses, it was great to get a win with a great atmosphere tonight,” Sexton said. “Our guys love playing in games like this. The kids have stepped up, especially in big games.”

“St. Laurence played very, very well defensively. They were prepared to guard us,” Frasor said. “We were chasing the whole time. It was a fun game, and it’s always competitive against them. They outplayed us tonight and made a lot of plays.”

Host St. Laurence will play in the Class 3A state playoffs on March 4 against Mt. Carmel in a regional semifinal game.

Br. Rice will battle Sandburg on March 4 in a Class 4A regional semifinal.