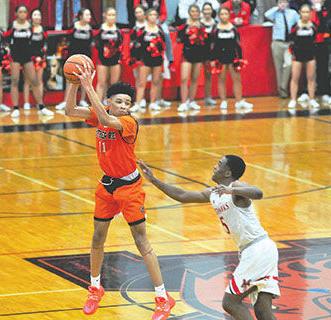 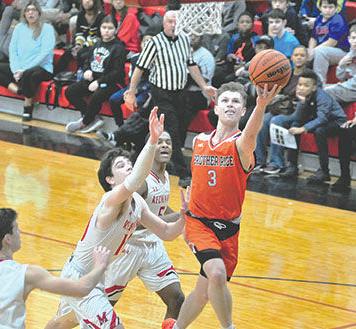 Conor Glennon goes up for a layup late in the fourth that put Br. Rice up 53-47. Glennon finished with 4 points and 6 assists. (Review photo) 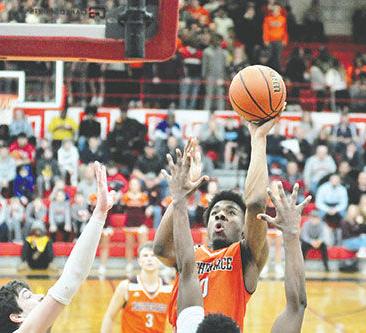 Deandre Hagan scored 12 points and added 11 rebounds for the Crusaders in the Battle of Pulaski rivalry game. (Review photo) 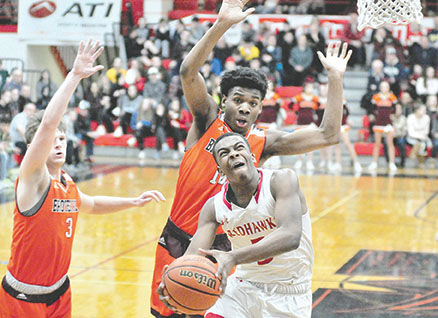 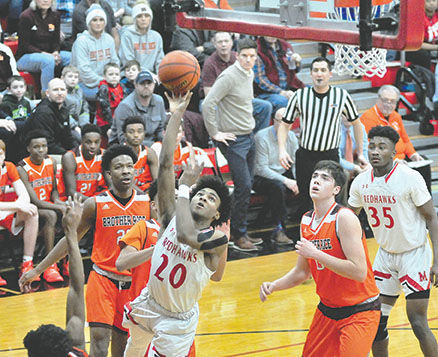 Conor Glennon goes up for a layup late in the fourth that put Br. Rice up 53-47. Glennon finished with 4 points and 6 assists. (Review photo)

Deandre Hagan scored 12 points and added 11 rebounds for the Crusaders in the Battle of Pulaski rivalry game. (Review photo)

This season for Br. Rice, Rico Powell has been a jack of all trades.

The senior guard has helped spread the floor as a 3-point shooter, play defense on the wing and battle for rebounds inside.

As he showed on Jan. 21 in the Crusaders’ rivalry nonconference showdown in front of a packed house at Marist, Powell can also pour in the offense. He piled up 22 points as Br. Rice defeated the RedHawks 55-47.

“Mainly, it’s just helping the team win. That’s pretty much my role,” Powell said. “I can’t even explain [the hot shooting]. My teammates were finding me, so I had to knock the shots down. It feels good.”

Powell finished with 6 3-pointers, including 5 in the second half.

With the Crusaders in chase mode in the second half, Glennon knew he had to keep feeding Powell on the perimeter.

“When someone is shooting as well as he was, it’s my job. I’ve got to know where he is on the floor,” Glennon said. “He makes my job a lot easier, the same for all my teammates. If I get them the ball, they’re going to make shots.”

Powell drilled 3 shots from distance in the third. In the fourth, he nailed a corner 3 and a wing 3 50 seconds apart to put the Crusaders up for good at 47-42.

The 6’0” guard played sparingly as a junior, but in his senior year, he has made the most of his breakout opportunity.

“Everything was on. The bench and my teammates helped a lot and told me to keep shooting,” Powell said. “They helped me shoot even better. I couldn’t let them down. We didn’t want to go home with a loss.”

Scoreless through 29-plus minutes, Glennon broke out late with 2 impressive drives to the hole to help hold off the RedHawks.

An old-school point guard who doesn’t always look to score, Glennon capitalized when his team needed buckets the most.

“My style is winning. I don’t care if it’s 25 points or 15 assists, defense, whatever it takes,” he said. “People get caught up in the box score, but all I care about is the win or the loss.”

The comeback win continued a string of exciting wins for Br. Rice, including a three-OT win over Richards and a Chicago Catholic League win over Providence that, at one point, saw the Crusaders trailing by 14.

“You just stay in control,” Powell said. “Even when we were down, we were still calm. It’s hectic, and you can barely hear coaches yelling plays, but [being down] was nothing.”

Knight gave credit to Powell and the Crusaders for their hot-shooting night.

“They got really good looks for their shooters. [Powell] got a lot of open shots,” Knight said. “They knocked them down, and down the stretch, we couldn’t put the ball in the basket.”

With Knight, Morris and junior Daniel Reed (8 points) leading the charge, a fast-paced RedHawks squad was in control in a close contest through three quarters in front of a loud capacity crowd.

“We looked really good in transition,” Knight said. “We know we can push and get the ball in the paint. It’s crazy with both crowds screaming. You try and focus on the game. It’s just you and your teammates out there.”