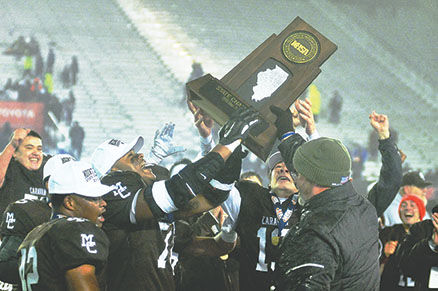 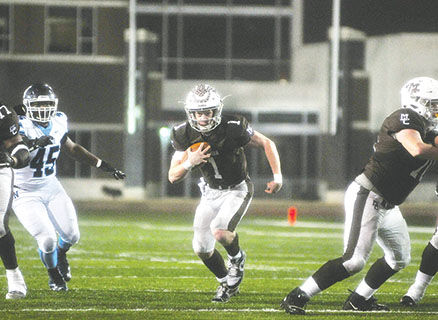 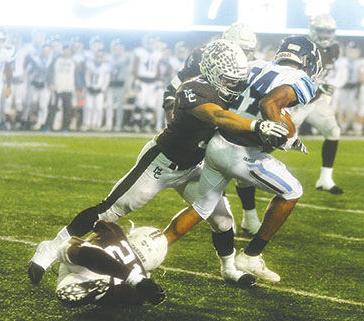 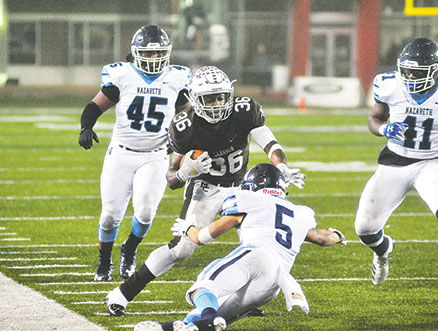 Junior running back Kenenna Odeluga works the sideline against a wave of Nazareth defenders. He finished with 176 rushing yards. (Review photo)

Junior running back Kenenna Odeluga works the sideline against a wave of Nazareth defenders. He finished with 176 rushing yards. (Review photo)

After watching his older brother, Jordan, now Mt. Carmel’s coach, during Jordan’s standout career with the Huskies, Justin has become the second Lynch to put on a crazy-good performance at Huskie Stadium, this one coming against a high-flying Nazareth Academy on Nov. 30 in the Class 7A title game.

Justin Lynch rushed for 5 touchdowns, and the Caravan defense delivered a dominant performance in a convincing 37-13 victory to earn Mt. Carmel’s 13th state championship and first since 2013.

Justin Lynch said that, in addition to winning a state championship, playing at Huskie Stadium gave him a personal goal, thanks to his brother and coach.

“Growing up, I was always in the stands watching him,” Justin Lynch said. “Before the game, he said, ‘The last time I played on this field, I rushed for 320 yards.’ I don’t think I came close to 320, but I tried.”

In cold and rainy weather, Lynch rushed for 120 yards and 5 touchdowns. Junior running back Kenenna Odeluga carried the ball 29 times for 176 yards.

“You’ve got to have that mindset of running effectively,” Odeluga said. “Jalen and our O-line really pushed the line of scrimmage and made it easy for us to find a hole, cut and get some yards.”

While the ground game did its job, the Caravan defense did the same—and then some—in slowing down junior quarterback J.J. McCarthy, a Michigan recruit, and a Roadrunner offense that averaged 37 points a game.

“We knew their receivers were fast and tall, so [Coach Dave Lenti] wanted us to disrupt routes,” said senior cornerback Marty O’Brien. “Earlier games, they were able to run free. Disrupting routes messed up their timing. They were getting frustrated, and that fueled us to keep on going.”

Mt. Carmel had 9 tackles for a loss, costing Nazareth 51 yards. Coach Lynch said the Caravan builds its game around a specific part of the field.

“Games in November are won up front, on the offensive and defensive line,” Lynch said. “It showed today. We controlled up front, for sure. Our defense flew around the ball and caused a lot of confusion on the other side.”

Maciel-Haygood recovered a McCarthy fumble early in the third to set up Mt. Carmel with beautiful field position in the red zone. Julian Patino drilled a 22-yard field goal to put Mt. Carmel up 23-13.

“[The fumble] was the coolest thing I’ve ever seen in my life,” Maciel-Haygood said. “I wanted to score real bad, but I wanted to give the offense the ball. I just landed on it instead.”

As coach, Jordan Lynch has led the Caravan to a 25-2 record in his first two seasons, but, according to senior receiver Tony Livermore, he did more than just design plays in preparation for the game against Nazareth.

“Coach Lynch was the scout team QB this week,” Livermore said. “We came in prepared. We had a Heisman finalist practicing against our defense. It means a lot that he was in there with us.”