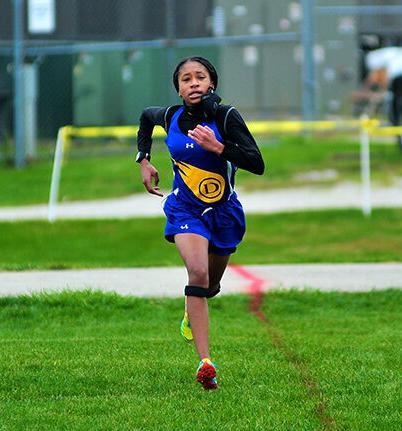 De La Salle sophomore Keyaira Moore races to a first-place finish at the Chicago Ag School in a quadrangular meet. Moore qualified for state as a freshman. (Review photo) 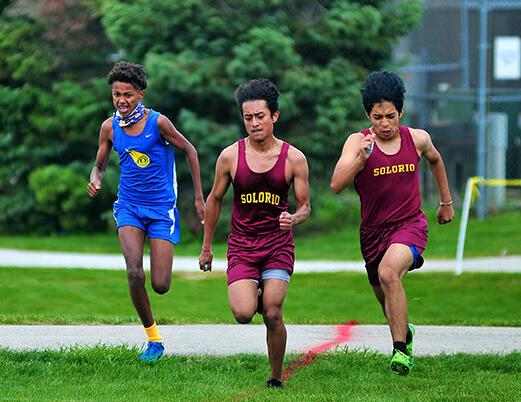 De La Salle sophomore Keyaira Moore races to a first-place finish at the Chicago Ag School in a quadrangular meet. Moore qualified for state as a freshman. (Review photo)

She started running on the track-and-field team early in her elementary school years, and then in sixth grade she added distance running to her resume.

Now, Moore is in her sophomore season at De La Salle and looking to accomplish big things after qualifying for state last year.

“Since I made it to state in freshman year, that motivated me to push even more this year,” Moore said. “I want to be able to place higher if we do have a state meet.”

Moore, an Evergreen Park resident, went toe to toe with Solorio senior Jasmine Reyes through the first two miles before making her move. When she did, she used her experience from running against Reyes recently on the same course.

“I ran against her last week, so I knew in that second mile she gets tired,” Moore said. “I figured ‘OK, let’s see how the second mile goes, and then I can pick it up.’ When I saw she was keeping up with me, I made sure she never got too far ahead.”

Moore pulled away for good over the final mile, winning with ease.

Last year at state, Moore finished 54th overall in the Class 2A race. De La Salle will compete on Oct. 17 at the upcoming conference meet and on Oct. 24 at the St. Ignatius regional in Lincoln Park.

Moore knows now that a calm mindset in a race goes a long way.

“State was intimidating at first, but once I got there, I don’t know, the fear that was with me just lifted away,” Moore said. “I had a lot of fun on a fun course. I like the way it feels when you run, especially if you’re in the zone. It feels like you’re floating on air. I like that sensation.”

In the boys race on Oct. 3, De La Salle junior Chase Pitre paced the Meteors, finishing second (17:40). Pitre ran most of the race in pace with two Solorio competitors, and the trio fought for first in a furious sprint down the chute at the end.

The Meteors (67 points) finished third at the quad meet.

Pitre, a Lincoln Park resident, went out for the cross-country team in late summer when soccer was moved to the winter/spring season.

“I expected soccer to be moved, but it was disappointing still,” Pitre said. “I was glad we’re still having a soccer season for the most part. At least it was just postponed but still happening. I was happy.”

Pitre ran cross-country in elementary school and is also a track-and-field athlete, typically competing in the 800-meter (half-mile) and 1,600-meter (mile) races. Still, adjusting to a new sport on top of juggling his hybrid schedule at De La Salle, it’s taken some time.

“I saw this as a conditioning opportunity to stay fit. [Coach Eric Crosby] invited me to come out and run,” Pitre said. “I wanted to stay prepped for soccer. It’s been an adjustment, honestly, but it’s a new normal. It’s a better routine now.”

“Last year, Coach Crosby asked me and some other seniors to do it,” Hopkins said. “We knew Chase does distance, so we brought him along. Since we were doing it, that helped convince some other soccer players to join the team, too.”