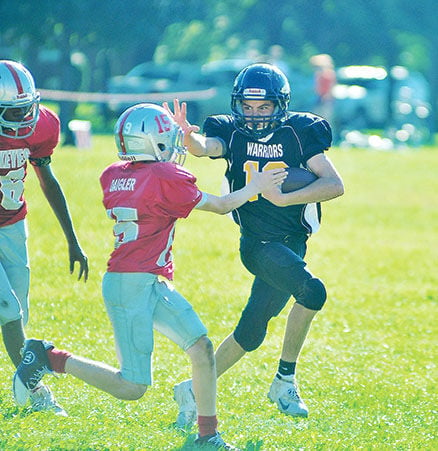 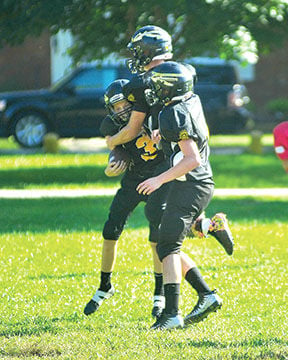 Wide receiver Jimmy Deacy is mobbed by his St. Cajetan teammates after his 22-yard touchdown catch in the second quarter. (Review photo) 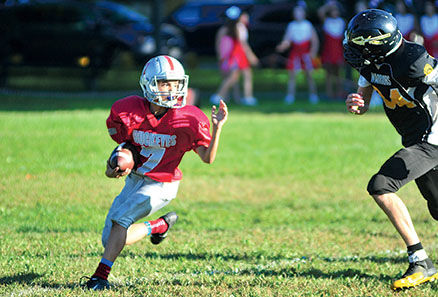 Wide receiver Jimmy Deacy is mobbed by his St. Cajetan teammates after his 22-yard touchdown catch in the second quarter. (Review photo)

Three games into the season, St. Cajetan varsity football Coach Mike Murray has seen his offense pile up the points.

With a 3-0 record, the Warriors are averaging 29 points. But as good as the offense has been, Murray has to tip his cap to the defense.

Playing at Kennedy Park in its Homecoming game, St. Cajetan rolled to 28-0 victory on Sept. 15 over St. Barnabas in Southside Catholic Conference action.

“As good as our offense has been, I think our defense might be even better,” Murray said. “Everyone is just jamming to the ball, and the guys are getting into it. They’re buying in, and they’re really hustling. It’s unbelievable to see.”

St. Barnabas dropped to 1-2 following an impressive comeback win in Week 2 over St. Christina, a 26-16 victory.

For St. Cajetan, Schickel did double duty, starting off the scoring with a hard-fought 24-yard run through the Buckeyes defense.

Quarterback Ryan Hartz hit receiver Jimmy Deacy down the sideline with a pretty teardrop throw for a 22-yard touchdown in the second quarter.

Matt Regan closed the first half with a 9-yard run for a score.

“This is probably the most balanced team since I’ve been here,” Murray said. “They’re all tough. They run hard. Our guys still developing; they’re feeding off our leaders. They’re all getting better.”

Murray isn’t adding any more hype to the upcoming contest.

“We don’t want to over blow it, but it’s a big game,” Murray said. “No pressure on the game, just play hard and do what you’re supposed to do; see where the chips go.”

In the tough loss, St. Barnabas received a huge defensive effort from defensive back Nicholas Maguire with 2 interceptions.

Coach Mark Kelly also credited Nolan Baudo and Eric Lewis for their strong play on both sides of the ball.

In the Week-2 win against St. Christina, the Buckeyes fell behind 16-0 but rattled off 26 unanswered points to clinch the win.

“Our kids have showed a lot of resiliency in some tough situations,” Kelly said. “We were outmatched today, but the kids kept fighting.”