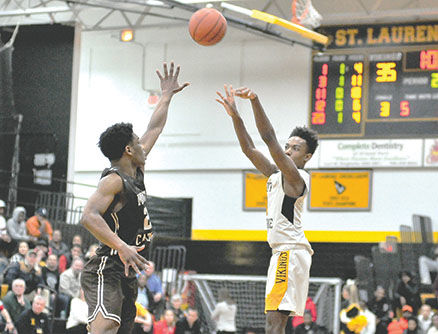 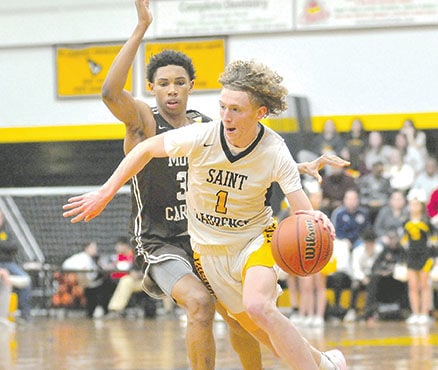 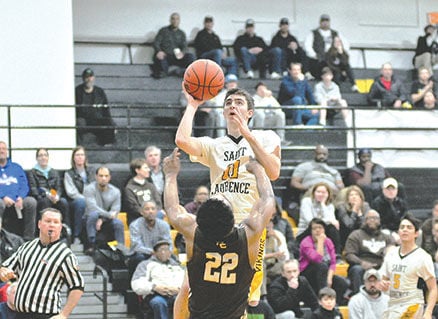 Senior guard Anthony Lenard chipped in with 15 points for the Vikings, including 3 3-pointers. (Review photo)

Senior guard Anthony Lenard chipped in with 15 points for the Vikings, including 3 3-pointers. (Review photo)

This year, the spotlight has been on St. Laurence senior guards Trey Davis and Finn Walsh to help carry the load for the Vikings.

And when their team needed it most, the senior duo delivered results in a big way.

Davis and Walsh were everywhere on March 4 in a Class 3A regional semifinal as host St. Laurence prevailed with an exciting 77-72 win over rival Mt. Carmel.

“As seniors, we stay calm. The coaches told us to be a leader at all times,” Davis said. “We believe in ourselves and our teammates. We know what we can do when we play like we did tonight.”

St. Laurence advanced to play top-seeded Bogan on March 6 in the regional final. The Vikings lost 79-65 to the Bengals. Walsh (25 points) and senior guard Anthony Lenard (15 points) led the effort for St. Laurence.

The Vikings finished the season 15-17.

In the Mt. Carmel victory, Davis poured in 23 points and added 9 rebounds and a key steal in the closing seconds to seal the win.

The Vikings were without junior forward Darius Wilson, one of the team’s go-to players, who sat out with an injury. However, Davis said, St. Laurence did not panic.

“It was next man up,” he said. “Everyone has to be ready when you get in the game and give it all you’ve got. That’s what [Aaron Wofford] did when he got in there. He helped us out big-time.”

Typically the team’s sixth man, Wofford moved to the starting lineup and finished with 15 points. Lenard also scored 15 for the Vikings.

St. Laurence led by as much as 15 points in the second half only to see Mt. Carmel cut the deficit to 1 point three times in the game’s final minutes.

Down 75-72, the Caravan had a chance to tie, but Davis swooped in for a steal of the inbounds pass near midcourt to preserve the win.

“I was reading the play, and the coaches told us to go over all screens,” Davis said. “I took a chance and jumped it to get the steal. I was struggling coming into this game, but my teammates and coaches kept me up.”

Starring at point guard, Walsh was a force, slicing through the defense and leading the fast break to get his teammates some open looks.

“They were keying in on me getting to the basket today, which is something I’m pretty good at,” Walsh said. “When they’re trying to shut one thing down specifically, you can’t keep forcing the issue. You’ve got to get your teammates involved. I tried to impact the game in other ways.”

Walsh was the target of taunts from the Mt. Carmel student section, but he didn’t let them rattle him.

“It’s always nice to beat a neighborhood rival, especially when they’ve got a student section that is letting us have it,” Walsh said with a laugh. “It didn’t bother me. We got the final laugh, so that’s what matters.”

St. Laurence Coach Jim Sexton said the effort from his tandem of senior guards was inspired.

“We knew we’d rely on them a lot this year,” Sexton said. “Finn is our floor general. Trey has been up and down shooting, but he’s been big lately. Trey was playing like a senior who doesn’t want to see his high school career end, Finn as well.”