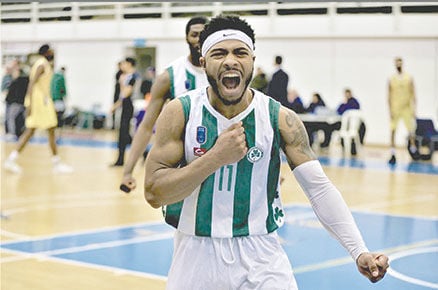 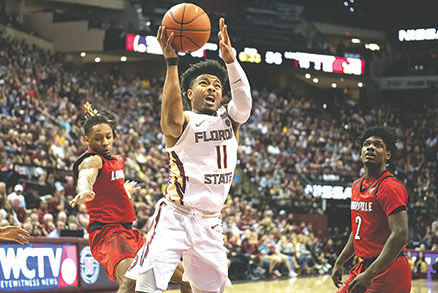 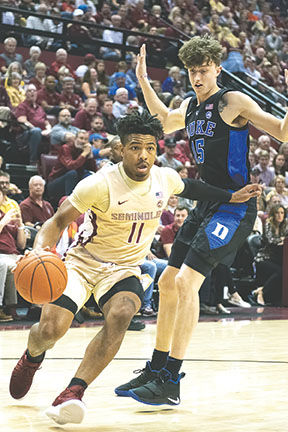 As a graduate student, David Nichols helped lead Florida State to the Sweet 16 in the 2019 NCAA Tournament. He averaged 6.4 points in a key role off the bench for the Seminoles. (photo courtesy of Florida State)

As a graduate student, David Nichols helped lead Florida State to the Sweet 16 in the 2019 NCAA Tournament. He averaged 6.4 points in a key role off the bench for the Seminoles. (photo courtesy of Florida State)

Playing with the University at Albany, David Nichols proved he could carry a Division I basketball program.

In his graduate student season at Florida State University, the Mt. Carmel grad showed that he was also willing to play a supporting role to help a team win.

So, in preparing for his first professional season, he was more than ready to prove himself again.

He played for Omonia in the OPAP Cypriot Basketball League in Nicosia, Cyprus. Before the season was cut short by the COVID-19 pandemic, Nichols was leading the league in scoring, averaging 23.8 points.

“It shows if you do the right thing, it pays off,” Nichols said. “I showed I could score the basketball at Albany and at Florida State and play in a different situation where winning was emphasized. Playing professionally this year, it was me getting better and showing I can still play at a high level.”

A 6’1” point guard and 2014 Mt. Carmel grad, Nichols signed with Omonia last August on the day he received his graduate degree from Florida State. He had known for years that he wanted to play professionally, no matter where that route took him.

The OPAP league features nine teams, all on the island nation of Cyprus in the Mediterranean Sea. Along with Cypriots, players are from the U.S., Canada, England, Finland, Greece, Nigeria, Serbia and the Ukraine.

“It was exciting to go. I was ready to go to work,” Nichols said. “I knew that overseas hoops was pretty cutthroat. They’ll send you home in a heartbeat if you’re not performing. I saw nine or 10 Americans sent home over the course of the season. You’ve got to do what it takes to survive and be successful.”

First up for Nichols and his Omonia teammates was a month-long training camp featuring one practice after another, or as Nichols called it, “the most basketball I’ve ever played.”

Nichols exploded in his professional debut, pouring in 31 points with 6 rebounds, 6 assists and 5 steals in a tough Omonia defeat. He followed that up with games of 24, 19, 15 and 20 points. Still, some doubts popped into his head, especially after rehabbing from an ankle injury sustained in FSU’s Sweet 16 run in the 2019 NCAA Tournament.

“Early on, we were playing a game a week. You have a whole week to think about that one game,” Nichols said. “A bad game sits with you. You wonder what teams will do once they have a scouting report. Maybe they underestimated me early.”

Nichols found his rhythm quickly as he settled in for the season’s long haul. However, everything was an adjustment. Nichols had never traveled internationally before, and he joked that he missed trips taken by the teams at Albany and Florida State by a season.

The high-scoring guard had to adjust to the different way that European refs call traveling violations. He also had to transition to new and unfamiliar defensive schemes as well as work under a constantly shifting schedule.

One week would have one game, the next two or three. Then, he’d have a month with no games around Christmas and then another month off as many players returned to play with their country’s national teams. Teams also played games in-season for the Cypriot Cup, a tournament for a trophy, bragging rights and a bonus.

All the while, the cloud of being relegated to a lower division if the team finished last in the standings hung in his mind. As for the business end of the sport, Nichols wasn’t a complete newbie, thanks to his younger brothers.

“I actually knew some of it from playing [the popular soccer video game, FIFA],” Nichols said. “My younger brothers are big soccer fans, so I was familiar with the European style, relegation and promotion and just watching those top soccer leagues all over Europe.

Nichols made the transition smoothly as he lived halfway around the world from his home in South Holland. Omonia supplied an apartment and a car for each of its foreign players. The coaching staff also speaks English, a huge boost for Nichols’ transition to playing overseas.

Even with the temptation of Cypriot beaches and local nightlife, Nichols remained laser-focused on hoops.

“You’ve got free reign to do as you please,” Nichols said. “You live your life outside of basketball. I played a lot of video games. I’d watch film, and once the college season started, I’d stay up till 3 in the morning to watch Florida State games.”

Omonia compiled a 9-12 record before the season was canceled due to the pandemic. The team was within 1.5 games of a top-four playoff spot with a handful of league games remaining. Of the 12 losses, six were by 8 points or less.

“Top four [and the playoffs] was the goal,” Nichols said. “We lost a lot of close games, so we could have been right there. We had a young team, and we didn’t know how to win late, but we still had the chance.”

Following the league’s cancellation, Nichols returned home. He said he is unlikely to return to the OPAP league in Cyprus with players typically moving on to other leagues after a season.

However, he definitely plans to continue playing. As well as leading the OPAP in scoring, Nichols was also the most efficient player in the league, according to the stats. He was no gunner from the perimeter. Nichols made sure he always played smart.

“I’m a high-volume shooter, so being efficient that says a lot about me as a player,” Nichols said. “I’m not out there taking 40 shots a game.”

As leagues around the world remain on hold, Nichols is at home working on his game. He’s also continues to work on his own clothing line. As well, he’s looking forward to enjoying a Giordano’s pizza and continuing to catch up with family and friends.

But, no matter what, basketball will be his calling in the future.

“Playing professionally, I learned to be successful at that level. I have what it takes,” Nichols said. “I took everything I put into the gym, worked, improved and went for it. I’m confident in what I can do.”