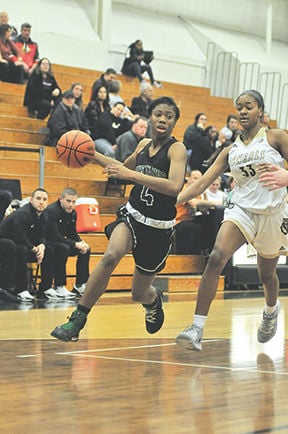 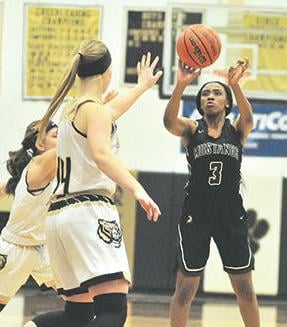 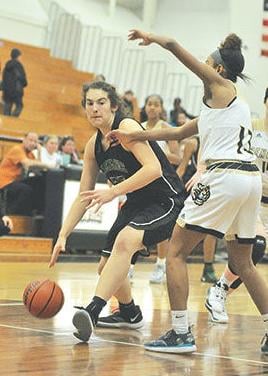 Freshman center Dora Cihocki drives to the hoop. She scored 6 points and added 10 rebounds and 2 blocks for the Mustangs. (Review photo)

Freshman center Dora Cihocki drives to the hoop. She scored 6 points and added 10 rebounds and 2 blocks for the Mustangs. (Review photo)

Tiera Robinson-Jones thought long and hard about what to do athletically in her senior year at Evergreen Park.

The track and field star had signed her National Letter of Intent to continue her academic/athletic career at the University of Minnesota, leaving the winter season of basketball up in the air.

So, she had to make a decision.

In a sports age when young multi-sport athletes are few and far between, Robinson-Jones wasn’t ready to leave the basketball team behind.

“I started out [as a freshman] playing basketball, so I was going to finish it my senior year. And it’s fun,” Robinson-Jones said. “It’s fun being a two-sport athlete. I’m going to continue playing.”

Robinson-Jones continues to be a go-to player for a young Mustangs squad, finishing with 11 points, 9 rebounds, 3 blocks and 2 steals as Evergreen Park (EP) lost a tough 41-38 game on Jan. 7 to host Oak Forest in a South Suburban Conference crossover.

As a young team continues to jell, EP Coach Bruce Scaduto is glad to have his point guard on the court.

“It’s her senior year, so you wonder if she’ll settle in on track because that’s what is paying for college,” Scaduto said. “It’s cool to see. She’s been with it all four years. She loves the sport that much, and Tiera knows she will be a leader of the team.”

She has high hopes for the home stretch of her senior hoops season with the Mustangs.

“It was tough making the decision around the summer time as I was running on the summer circuit,” Robinson-Jones said. “I thought maybe I shouldn’t play basketball, but I couldn’t just not finish something I started. I was going to finish it out.”

However, with plenty of young talent on the roster, including three freshmen who get extended minutes in the rotation, there is lots of potential.

Trailing by 10 points in the first half, the Mustangs relied on their defense to climb back into the game. Robinson-Jones tied the score at 25 on a hard drive inside with 6:13 left in the third.

Senior Jasmine Monroe scored seconds later off a steal and fast-break bucket as EP went up 27-25, its first lead of the game.

“It was our defense. We played good defense,” Robinson-Jones said. “We were feeding off each other, especially when [Dora Cihocki] and I are getting blocks and people are getting on the ground for balls. Our defense brought us back.”

Oak Forest responded with a quarter-closing 10-0 run to regain control.

But, down the stretch, EP fought to the final buzzer. A Monroe 3-pointer brought the Mustangs within a basket at 38-36 with 52 seconds left, but EP got no closer.

The win was within reach, and that is a lesson Scaduto hopes the team pays attention to going forward.

“The positive, we held them to 41 points. If we hold teams under 45, we always have a chance to win,” Scaduto said. “Hopefully, they learn that every possession is important, especially losing by 3. It’s a whole growing process with the team.”