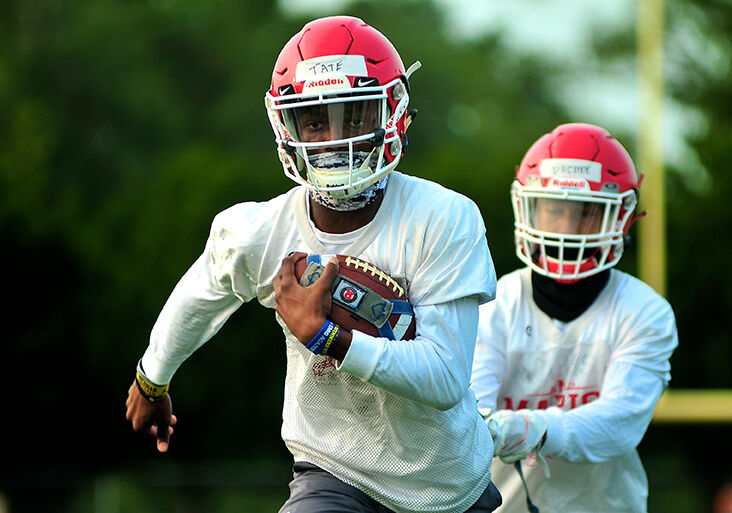 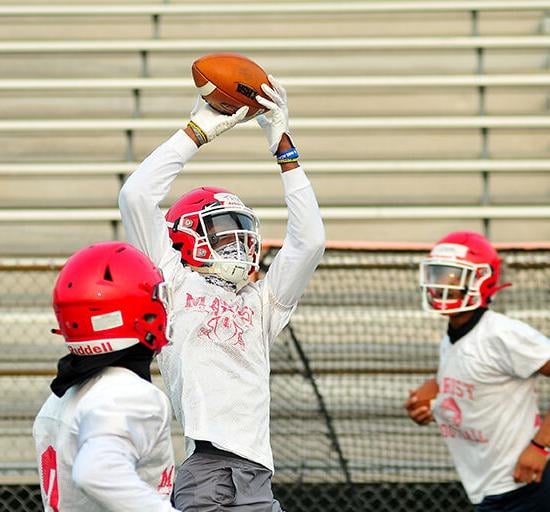 Carnell Tate pulls in a ball during a drill. A sophomore, Tate was recently ranked as the No. 1 recruit in Illinois for the Class of 2023. (Review photo) 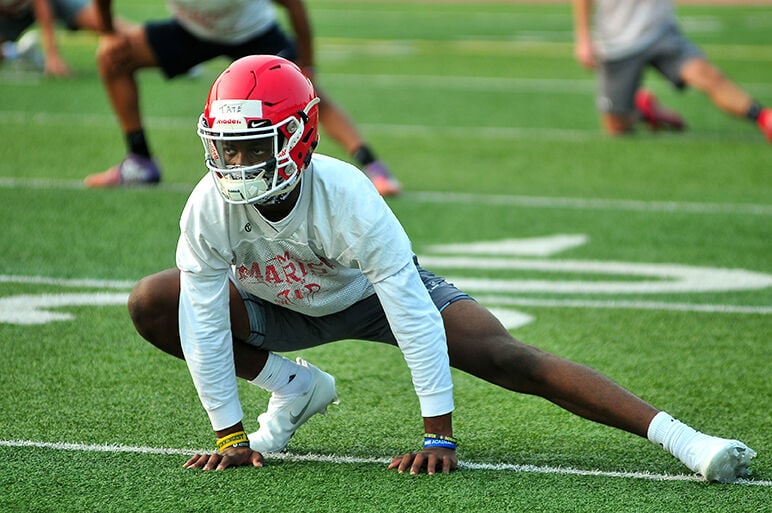 Carnell Tate pulls in a ball during a drill. A sophomore, Tate was recently ranked as the No. 1 recruit in Illinois for the Class of 2023. (Review photo)

Carnell Tate knew the recruiting would get crazy at some point this year.

Coming off an impressive freshman season with Marist’s varsity team, Tate saw his stock rise throughout a busy offseason, including standout workouts at the Midwest BOOM showcase.

However, as the offers from some of the top football programs continue to roll in, even Tate has been caught a little off guard.

“I wasn’t expecting it to blow up as much. It came as a surprise,” Tate said at a recent contact day at Marist. “It’s early in my high school career. It’s been crazy. It was shocking to see [recruiters] notice me this early.”

Tate said he is in no rush to make his college commitment, possibly deciding at the end of his junior year.

According to Marist Coach Ron Dawczak, it’s been an interesting few weeks lately as coaches from around the country check in on Tate.

“A lot of the big schools have taken notice,” Dawczak said. “Especially when you’re that age and one of your first offers is from Notre Dame. That’s a pretty good signal to the rest of the country that this is a really talented kid.”

Tate started his freshman season on the freshman team, but he was called up to the varsity squad for a Week 5 game against Fenwick. From that point on, Tate was a fixture on the varsity.

He finished his freshman year with 28 catches for 444 yards and 5 touchdowns.

Making the decision to call the talented athlete up to the varsity, Dawczak said, he knew Tate was ready.

“If a kid has the physical ability but not the mental side, you can do irreparable harm to a kid,” Dawczak said. “Carnell had the mental makeup and toughness to not only survive but thrive in that role. That’s a big piece to it.”

In his time at Marist, Dawczak said, he can only remember two freshmen coming in and contributing in varsity games, tight end Nic Weishar (Notre Dame) and wide receiver Flynn Nagel (Northwestern).

Prepping for his sophomore season, Tate said he knows that he won’t be sneaking up on anyone. He won’t be the freshman newbie. Now, competitors know he’s a threat that needs to be shut down.

Nonetheless, Tate said to bring it on.

“It’s a challenge. It puts a spotlight on my back to just go work harder,” he said. “My routes have gotten better, and I’ve gotten better at just catching the ball. I got faster, bigger and stronger.”

High school football in Illinois was postponed from the fall season to a winter/spring season starting in February 2021.

In recent weeks, football coaches and players have increasingly pushed to bring football back to the fall season. But, whatever the future holds, Tate is dedicated to making the best of his college opportunities.

“It means a lot to be practicing with my family and teammates,” Tate said. “I’m taking it all as it comes. Whenever is the right time for me and my family, I’ll commit.”