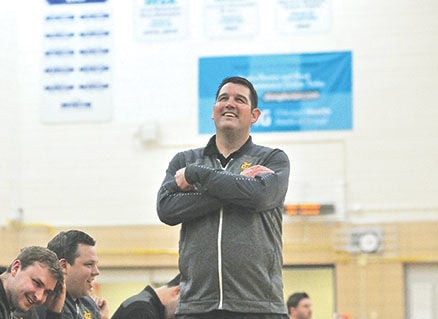 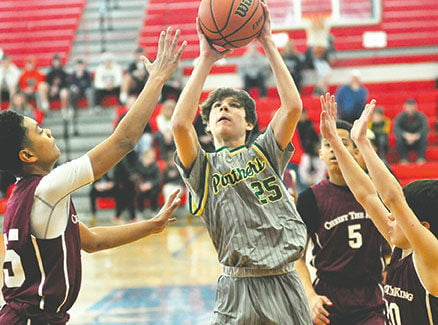 Central Middle School guard Nolan Sexton was a standout player for the Panthers this season. He will be a freshman in the fall at Evergreen Park Community High School with a chance to play for his dad, Jim, who was recently named the Mustangs’ new head coach. (Review file photo)

Central Middle School guard Nolan Sexton was a standout player for the Panthers this season. He will be a freshman in the fall at Evergreen Park Community High School with a chance to play for his dad, Jim, who was recently named the Mustangs’ new head coach. (Review file photo)

For Jim Sexton, there were just too many positives to pass up.

One of the biggest perks for Sexton in the coming years will be the opportunity to coach his son, Nolan, currently an eighth-grader at Central Middle School.

“Obviously being a lifelong resident, it makes it a little more special to come home and coach at EP,” Sexton said. “And, the chance to coach Nolan and his group of buddies, there is a talented pipeline coming in. It’s a new venture, a new journey, but it’s an exciting time to jump in at EP.”

Sexton spent the last three years as head coach at St. Laurence, but the school announced on March 13 that he had stepped down from the position. Sexton cited St. Laurence’s facilities—the school has only one gym—which resulted in a complicated schedule for him and his family.

In three seasons, Sexton led the Vikings to a 62-34 record and 2 regional titles.

At EP, Sexton replaces Pat Flannigan, who had coached the Mustangs for the last nine seasons. Flannigan stepped down to take an assistant athletic director position at EP.

“It was great to get a local guy as a head coach,” Soldan said. “Jim knows all the kids in the area, and this is where he lives. We’re hoping to build these next couple years and keep those kids in the community where we’ve lost them in other years.”

Sexton said he wants to bring his high-octane style to the Mustangs as well, the same energy he injected into the program at St. Laurence.

During Sexton’s tenure, the Vikings ran a fast-paced offense that relied on waves of 3-pointers and a fast-break mentality that piggybacked off an aggressive pressure defense.

“I’ve always said it, ‘Three is more than two,’” Sexton said with a laugh. “You tweak from year to year, but we plan on playing that same up-tempo style. The more shots you get up, the better. Kids like to play that way and score a lot of points. It’s just a matter of being in great shape.”

Some key returning players for the Mustangs are Nolan Bruce, Christian Carvajal, Devin Green, and Mahari and Malik Kelly.

Along with the returning players, Nolan Sexton and many of his teammates from Central will enter their freshman year at EP this fall.

Central finished second in the South Suburban Basketball League North division, losing to Christ the King in the championship.

Nolan Sexton said he’s looking forward to the chance to play for his dad; however, he knows he won’t be getting any favorable treatment

“It’ll be a lot of fun, but it will be different, too. He won’t take it easy on me,” Nolan said with a laugh. “As I grew up, I started playing basketball more, and my dad helped me out a lot. It will be fun playing for him and for all my friends to go to Evergreen, too.”

Jim Sexton is excited for his next step to be with the Mustangs.

EP purchased the Evergreen Racquet and Fitness Club over the past year and continues to rehab and build facilities for its athletic programs. Soldan said four more basketball courts are expected to be finished by summer 2021. Construction has also begun on the installation of turf fields for the baseball and softball team on the school’s campus.

Sexton said that work is a great building block for EP athletics.

“You hope you can keep the kids together from the area,” Sexton said. “The facilities are great where a lot of private schools can’t compare. The huge fieldhouse, the facilities on campus, it’s just a matter of getting the kids in the building, get them on campus and let the rest speak for itself.”

A 1994 Br. Rice graduate, Sexton is the Crusader’s all-time leading scorer. He went on to play college ball at Creighton and University of Illinois-Chicago.