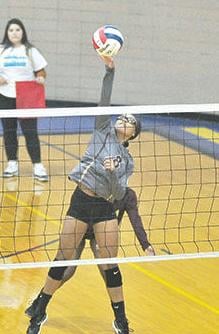 Playing at St. Francis de Sales, Morgan Park Academy (MPA) defeated Horizon/Southwest Chicago 25-18, 25-12 on Oct. 21 to win a Class 1A regional championship. It was MPA’s first regional since 2016 and 12th title in the last 15 years. The Warriors advanced to the Willows Academy Sectional, facing Newark on Nov. 4, after press time, in the semifinals. In a 25-7, 25-11 victory over Bridgeview Universal on Oct. 30 in the regional semifinal, Samaria Harris finished with 5 kills and 5 aces and Mia Wallace added 5 assists, 3 aces and 2 kills. Also contributing for the Warriors were Simone Hubbard (3 aces, 3 assists), Isabella Cabello (3 aces) and Alexus Spann (2 kills). (Review photos)