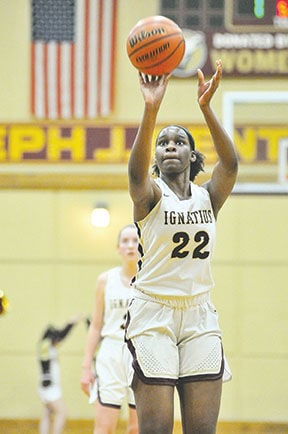 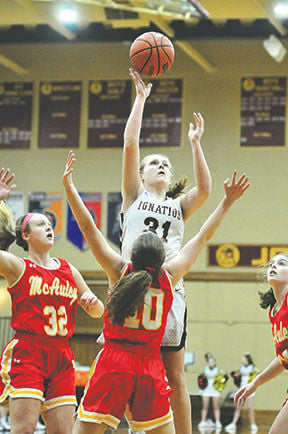 Rhema Ogele admitted that her first game this season for St. Ignatius in November was a little rough.

The Wolfpack was playing Benet Academy, one of the perennial winning programs in Illinois, and Ogele was playing in her first high school game in over a year after transferring from Josephinum Academy after her freshman season.

For Ogele, facing the Redwings was a true case of being thrown into the fire.

“It wasn’t a quick [transition]. It was not my best game,” Ogele said with a laugh. “[Coach Cara Doyle] told me to keep my head up. It would come to me, and the next game I had an amazing game. It was trusting the process, getting a feel for the game and being a part of the Wolfpack.”

Since those early struggles, Ogele, a 6’3” junior forward, has settled in smoothly for St. Ignatius. Balancing out a strong rotation of guards and perimeter players, Ogele has averaged 9.9 points, 9.3 rebounds and 1.5 blocks as a strong presence in the post.

Ogele played her freshman year at Josephinum but transferred for her sophomore season. Illinois High School Association (IHSA) rules require that a player transferring from a private school to a private school must sit out a year of athletics.

Not allowed to play in games, Ogele was eligible to work with the team in practices. She made the best of the situation throughout the season.

“It was really hard. I love the game, and I was just watching other people play,” Ogele said. “It was hard for me not to get into the games, but it was nice getting a feel for practice and getting to know my teammates. It was nice being a part of the program.”

According to Doyle, Ogele never sulked; she made the best of the situation.

“Rhema came to practice and really worked her tail off,” Doyle said. “She’s been a great teammate. She’s the first player to go stand next to a freshman and put her elbow on their head. She totally gets it. I love being in the gym with her.”

Watching her junior forward back in the swing of things, Doyle has been impressed with her skills and work ethic. After all, Ogele is still relatively new to the game.

“Rhema is figuring it out. Playing-wise, she really didn’t start playing until freshman year,” Doyle said. “Her upside is so great. She’s super athletic, very quick and runs the floor great for her size. She’s figuring it all out.”

In the Wolfpack’s tough 46-38 defeat to rival Mother McAuley on Jan. 24, Ogele finished with 8 points, 7 rebounds and 2 blocks.

Through the ups and downs, Ogele knows the team has her back and vice versa.

“You want to pick each other up if you take a bad shot or pick up a foul,” Ogele said. “My teammates are always super supportive. We want to win a regional and, hopefully, a sectional. We feel like we’re a great team.”