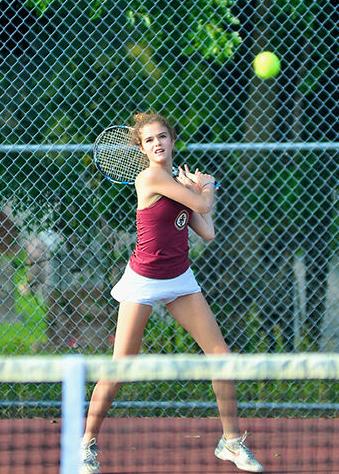 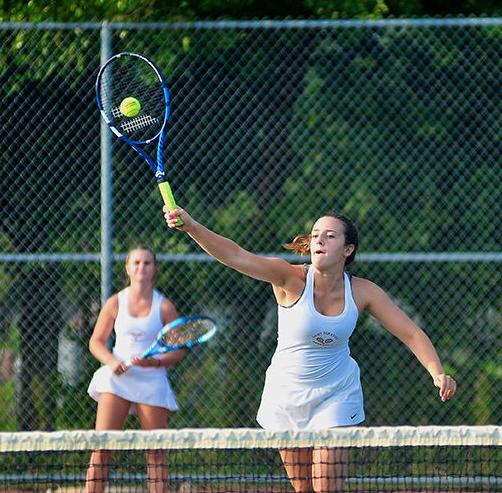 St. Ignatius freshman Mariel Negrin crushes one at the net against Marist. Negrin and doubles partner Delia Troy teamed up for a win at No. 1 doubles for the Wolfpack. (Review photo)

St. Ignatius freshman Mariel Negrin crushes one at the net against Marist. Negrin and doubles partner Delia Troy teamed up for a win at No. 1 doubles for the Wolfpack. (Review photo)

She also remembers finding her niche as a freshman on the team.

In that time, she’s thrived, including qualifying for the state tournament last year as a sophomore in the doubles bracket with senior Maya Goyal.

Now a veteran leader as a junior, Tsokolas is doing her best to help a young Wolfpack squad continue to grow during a turbulent season.

“It feels like yesterday that I was a freshman,” Tsokolas said. “I can relate to them, especially coming in as a freshman. They’re doing it during the coronavirus. We try and be welcoming, inviting and help create a team atmosphere that will make our play better on the court.”

Playing at Marist on Sept. 17 in a nonconference dual meet, St. Ignatius lost 3-2.

Tsokolas lost to Marist junior Molly Malloy in two sets at No. 1 singles.

Having lost nine seniors from last year’s team, including four-time state qualifier Ivvy Hicks, the Wolfpack is rebuilding this year with a strong group of sophomores and freshmen.

Junior Helena Cilella hasn’t played yet as she deals with a wrist injury. She made state with Hicks as a freshman and as a singles player last year.

St. Ignatius Coach Joe Tedino said he’s been impressed as his young lineup finds its rhythm through some tough matches.

“The girls are doing a good job,” Tedino said. “Playing these matches, you have a good mental game and develop that strong work ethic. The girls we’ve brought up, they’re getting good experience in those tough matches.”

Tsokolas, a Lake View resident, was playing in just her second match of the season and her first singles match.

St. Ignatius has faced a difficult dual-meet schedule, and the squad has lost to Francis Parker, Latin, Mother McAuley and Loyola.

Being back together as a team, Tsokolas said, the Wolfpack is making the best of each match. Tsokolas is trying to build off the lessons she learned last year at state.

“You’re fighting for every point because you see some crazy comebacks all the time. You see upsets,” Tsokolas said. “You understand the value of digging for every single ball. Fight for everything. The team, we haven’t been together since March. It’s great to come back with the girls and coaches.”

Squaring off with Marist, two St. Ignatius doubles teams claimed victories, including senior Delia Troy and freshman Mariel Negrin at No. 1 doubles and seniors Kathryn Starshak and Anna Driscoll at No. 2 doubles.

Negrin moved to the Chicago area from Philadelphia before eighth grade. She also plans to play basketball for the Wolfpack this year.

Her return to the tennis court as a freshman came after an extended layoff dating well back into elementary school.

“I played when I was younger but not the last four years, probably fourth grade,” Negrin said. “Getting back into tennis this year was a lot, but it’s gone well.”

Negrin and Troy won 6-1, 4-6, 6-0 in a three-set thriller against Marist. She has also played several matches this year with Starshak.

For the duo, it’s all about improving their communication on the court.

“That dynamic, that mindset, you can go out and hit, but the thought and strategy involved is so important,” Negrin said. “Playing doubles, communicating with your partner is such a huge aspect of your game. It’s re-learning the sport and the way you communicate.”