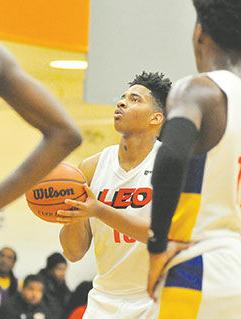 Senior center Kendale Anderson piled up 16 points, 10 rebounds and 3 blocks for the Lions in a key league win over Mt. Carmel. (Review photo)

Senior center Kendale Anderson piled up 16 points, 10 rebounds and 3 blocks for the Lions in a key league win over Mt. Carmel. (Review photo)

However, the adjustment he made for two teammates has been especially eye-opening.

Ford finished with 15 points and 7 assists. Anderson added 16 points, 11 rebounds and 3 blocks, and Howard scored 16 points and had 2 blocks.

Against Mt. Carmel’s zone and pressure defense, the Lions efficiently went about running their offense of working to get the ball into the post as often as possible.

Whether it was the guards driving or Anderson and Howard going up strong, Leo stuck to its strategy.

“We know our game plans. Kendale is better finishing inside the lane, so I try and feed him,” Howard said. “We feed off each other. It’s a one-two punch, and it makes it easier for both of us to get the ball and have more opportunities to score.”

Howard is a Beverly resident and Vanderpoel Elementary School graduate.

Mt. Carmel took its only lead of the game at 30-29 in the second quarter, but Leo answered with an extended 9-3 run over the next three minutes. Anderson converted a 3-point play, and Ford split two free throws before the half.

Opening the third, Ford found Howard for an alley-oop lay-up. Ford said he likes running the offense at the point.

“I feel good,” he said. “I learned a lot last year from the senior guards [at Orr]. I’m learning how to win and be the point guard and a leader.”

Leo was able to keep Mt. Carmel at arm’s length throughout the second half, finally pulling away over the final three minutes.

The victory came after tough back-to-back losses against Neuqua Valley and Hillcrest.

“Neuqua was a bad one. We came out lazy and too cool,” Ford said. “We told each other that this is the time of the year where we’ve got to start clicking. Once you’re in state, you can’t play like that.”

Leo played at Montini on Feb. 11, after press time, and will play at St. Rita on Feb. 14 in a battle of the top two CCL-White teams.

The Lions last won a CCL title in 2018, and Howard said they know what to do.

“We need to play hard as a team, do what we do, play aggressive and get the win,” Howard said. “We had a rough start to the season, but having a shot at the Catholic League is huge. No matter what team we play, it’s a good opportunity to get better as a player and as a team.”