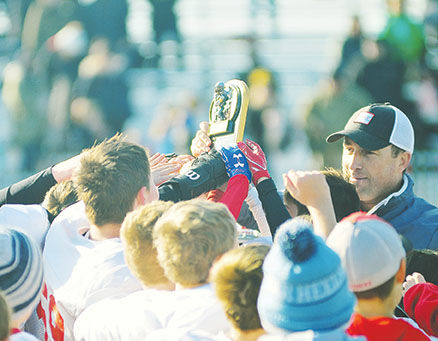 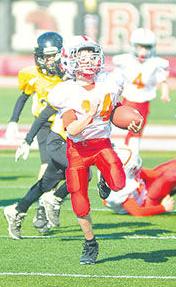 Most Holy Redeemer running back Daniel Speski powers downfield through the defense for a first-half touchdown. (Review photo) 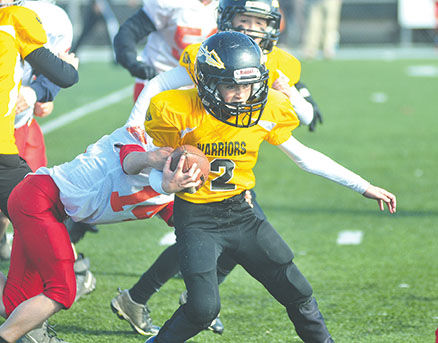 St. Cajetan running back Cullen Winters grits out yardage with a Most Holy Redeemer defender draped on his back. (Review photo)

Most Holy Redeemer running back Daniel Speski powers downfield through the defense for a first-half touchdown. (Review photo)

St. Cajetan running back Cullen Winters grits out yardage with a Most Holy Redeemer defender draped on his back. (Review photo)

The Most Holy Redeemer JV football team had only one blemish on its schedule this season, a 7-0 loss in Week 2 to St. Cajetan.

Given a chance to avenge that loss, the Raiders did not disappoint.

Behind a dominant performance from its stable of running backs and strong line play up front, Most Holy Redeemer (MHR) claimed a convincing 25-0 victory over the St. Cajetan Warriors on Nov. 3 at Marist High School to win the Southside Catholic Conference JV championship.

“We have some really solid, good fundamental players on the line and backs who are great kids and run hard,” Coach Dean Reidy said. “They play hard and do everything we ask them to do fundamentally. They believe in everything we coached them in. I’m so proud of these guys.”

The 2019 edition featured a heavy dose of running led by Danny Speski (184 rushing yards, 3 TD) and Tommy Hosty (103 rushing yards, TD). Speski scored all 3 of his touchdowns in the first quarter as MHR went up 19-0 and never looked back.

“We have players moving from position to position week to week,” Reidy said. “The kids stepped up, and no one complained. Everyone did a great job.”

Hosty sealed the win in the third quarter with a 67-yard TD scamper on a third-down play.

The Raiders were motivated by their early-season loss to the Warriors.

“We felt like we didn’t play our best game the first time we played them,” Reidy said. “We know they’re loaded with talent. We had to come prepared, and we made a huge improvement.”

The St. Cajetan JV team made its first championship appearance since 2005, and Coach Matt Winkler said his team put up a good fight.

Running back Cullen Winters rushed for 39 yards for the Warriors.

“These kids got a lot out of this year,” Coach Winkler said. “They should be very proud of the opportunity, especially being here for the first time since 2005.”