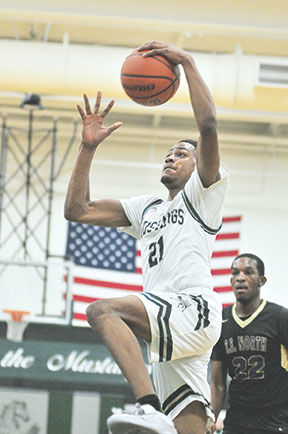 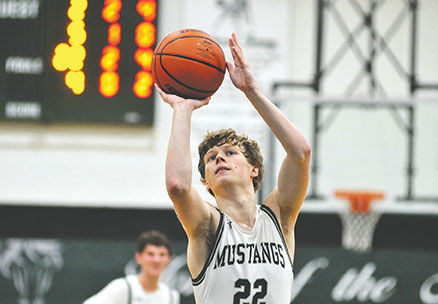 Last year as a junior, Rasheed Dyson was a huge asset for Evergreen Park (EP), averaging a team-high 12.7 points.

However, in preparing for his senior campaign, Dyson knew he’d need to do much more—and he’s doing it.

“I knew I’d have a bigger role. Last year we had [De’Saunte Tyus], and he was 6’5” and getting rebounds,” Dyson said. “I’ve got to get rebounds, get my teammates involved and be a leader on the court. I’m working hard in practice and games.”

On Jan. 3, Dyson finished with 13 points, 11 rebounds and 2 assists as host EP lost to T.F. North 73-40 in a South Suburban Conference crossover.

Dyson, a 6’3” rangy, athletic guard, is in his third season on varsity, and EP Coach Pat Flannigan has been impressed by Dyson’s leadership with an undersized, guard-heavy Mustang lineup.

“Rasheed’s getting the ball more. We tell him every day that he’s our guy,” Flannigan said. “He’s a really nice kid, a really nice young man. He’s been a constant for us. We don’t need to worry too much about him showing up each game.”

Averaging 8 points more a game this year than he did in the previous season, Dyson hasn’t limited his leadership role to just scoring. He’s doing his best to get his teammates numerous wide-open shots.

“Some days, my shot will be off, so if it is, I’ll do something else,” Dyson said. “If I’m not going, I try and find my teammates, get them involved.”

With EP trailing in the second quarter against T.F. North, Dyson strung together a stretch that featured a wave of attacks on the hoop.

His vicious, one-handed tomahawk dunk off a drive brought the Mustangs to within 4 points at 24-20 with 2-plus minutes remaining in the second quarter.

However, T.F. North then seized control with a 14-0 run over the next 4 minutes that gave it the lead for good.

EP was undone by waves of turnovers against a pressing Meteors team, giving the ball up 28 times. The Mustangs also struggled from the perimeter, shooting 5 for 21 from 3-point range.

Sliter is averaging 13.5 points and is one of the area’s best 3-point shooters, connecting on 46 of 135 coming into the T.F. North game.

Despite the loss that dropped EP to 4-11 overall, Sliter has seen improvement in the team throughout the first half of the season.

“We were just giving up too many points early this year,” Sliter said. “We’ve definitely gotten smarter. We’re executing our plays more, and our defense has gotten a lot better. We have to get stronger and hit our shots more consistently.”

As the Mustangs look to the meat of their conference schedule, Flannigan hopes the team’s big three, Dyson, Sliter and senior Michael Schulte (8.2 points, 26 3-pointers), will all connect in those big games.

“It’s a long season, and inconsistency has killed us,” Flannigan said. “We’ve had a couple nights where all three play well. I like this group of kids. We’re a better shooting team than we shot tonight.”