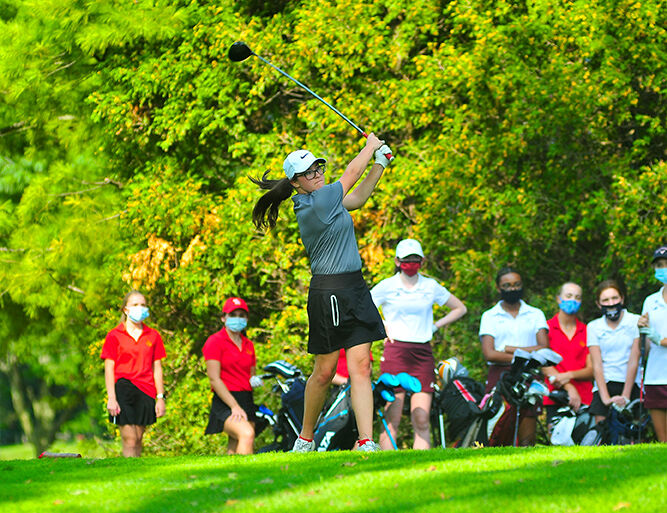 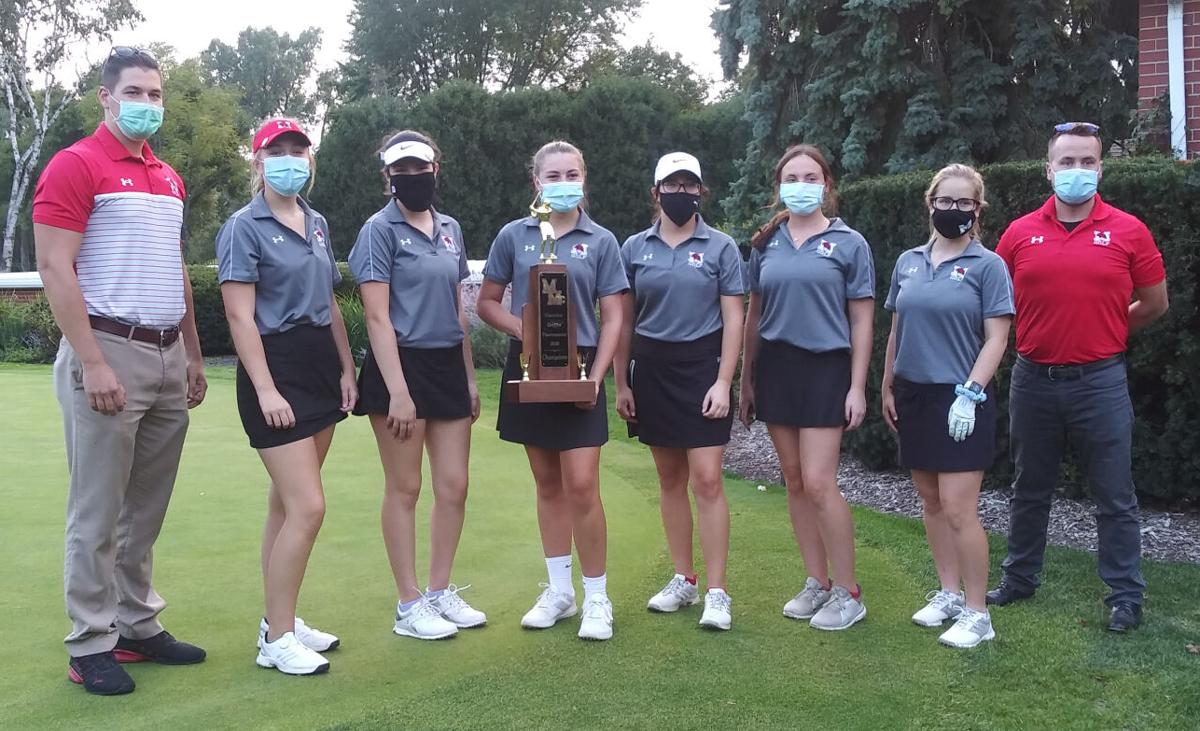 Shooting 195 as a team, Marist won its first championship in the Caroline Griffin Tournament since 2017. The three-team tournament, including Mother McAuley and St. Ignatius, honors Griffin, a 2012 McAuley grad who died in 2015 from a heart condition. (Review photo) 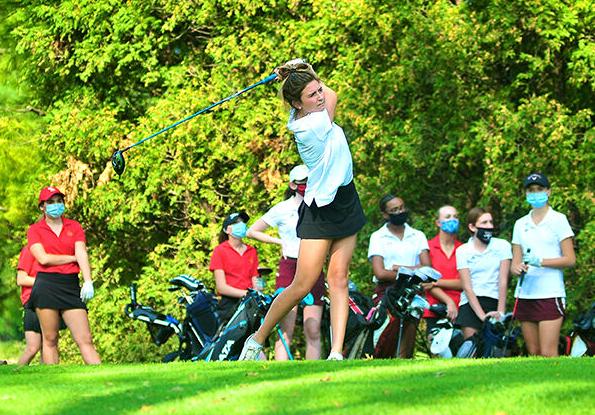 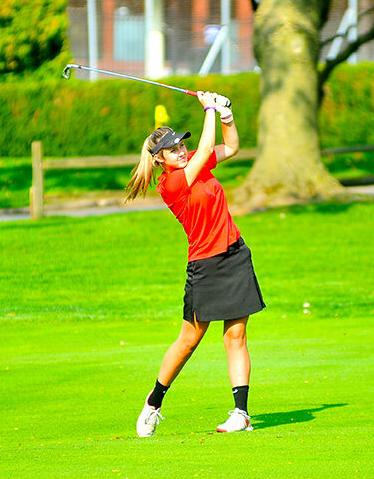 Mother McAuley senior Morgan Soch follows her approach shot on the fairway at No. 10. Soch carded a 52 to lead the Mighty Macs. (Review photo)

Shooting 195 as a team, Marist won its first championship in the Caroline Griffin Tournament since 2017. The three-team tournament, including Mother McAuley and St. Ignatius, honors Griffin, a 2012 McAuley grad who died in 2015 from a heart condition. (Review photo)

Mother McAuley senior Morgan Soch follows her approach shot on the fairway at No. 10. Soch carded a 52 to lead the Mighty Macs. (Review photo)

Mallorie Clifton could feel her round slipping away.

But, the Marist junior didn’t lose her cool. She stayed calm and finished strong with a string of late pars.

“Something on the seventh hole clicked. I had to get my game together,” Clifton said. “It was going downhill. I brought it back together the last three holes with three pars. After you get that one, you have that motivation to get others.”

It was the sixth annual tournament that honors Caroline Griffin, a 2012 Mother McAuley graduate and Beverly native, who died in 2015 from a heart condition.

“We all come out here to play for Caroline and the Griffin family,” Bulllington said. “We come out and play to have fun.”

Clifton has been on Marist’s varsity since her freshman year. With a junior-dominated lineup, she continues to be a consistent go-to golfer for the RedHawks.

For this round however, playing for a cause and for the Griffin Family, Clifton said, a good or bad score isn’t the main goal. The Griffins encourage organ donation in honor of Caroline.

“We know it means a lot to the family that we’re playing,” Clifton said. “That’s the biggest part of it, seeing them here and having that support. It’s incredible. It brings awareness to organ donation and opens up your mind. Who cares if you had a bad round? There are other things going on the world. It’s just golf at the end of the day.”

Marist competed at the East Suburban Catholic Conference meet on Sept. 29, after press time, at Inwood Golf Course in Joliet. The RedHawks will also play on Oct. 7 at Lincoln Oaks Golf Course at the Class 2A Shepard regional.

A recently announced sectional from the Illinois High School Association is still to be scheduled.

The RedHawks advanced last year as a team from the regional to the sectional. Bullington and her teammates are hoping for a repeat performance.

“I was really surprised to hear the news,” Bullington said. “When the coaches told us, I was really happy. Playing at sectional last year was a lot of fun.”

Junior Hailey Boyle and sophomore Annika Geiersbach have formed quite the one-two punch for the Wolfpack this season.

The duo continued that trend at the Griffin tournament, shooting 48 each for second-place St. Ignatius.

“We support each other a lot when we’re playing,” Boyle said. “We’re always positive with each other. It’s a fun competition between us.”

Boyle is a returning state golfer for the Wolfpack. It was a slightly off day on the course for the junior.

“The ball had some bounces into traps and not good sand traps,” Boyle said. “I was hitting past the green, and my short game wasn’t there.”

Also scoring for the Wolfpack were Lilly Boyle (51) and Madison Miller (57). Sophomore Hannah Clancy (60) rounded out the lineup.

St. Ignatius will host a Class 2A regional on Oct. 6 at Cog Hill in Lemont.

Senior Gabi Hernandez had an OK day playing at Ridge, shooting 54 for the Mighty Macs.

Hernandez, a four-year varsity player, savored the chance to play in the Griffin tournament for a fourth straight year.

“It’s an honor playing for Caroline,” Hernandez said. “It’s really something because this tournament is really special. It’s not just another tournament. We know it’s for a good cause, and we get to play with Marist and St. Ignatius. I enjoy it because it is friendly competition.”

The Mighty Macs and St. Ignatius will play on Oct. 1 at White Pines Golf Club in Bensenville in the Girls Catholic Athletic Conference meet.