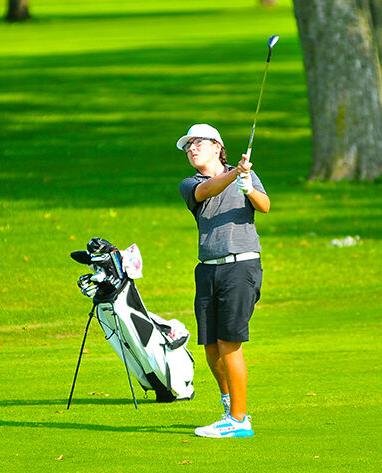 Marian Catholic sophomore Casey Taylor chips onto the green at No. 10 at Calumet Country Club. Taylor shot 38 to lead the Spartans against Marist. (Review photo) 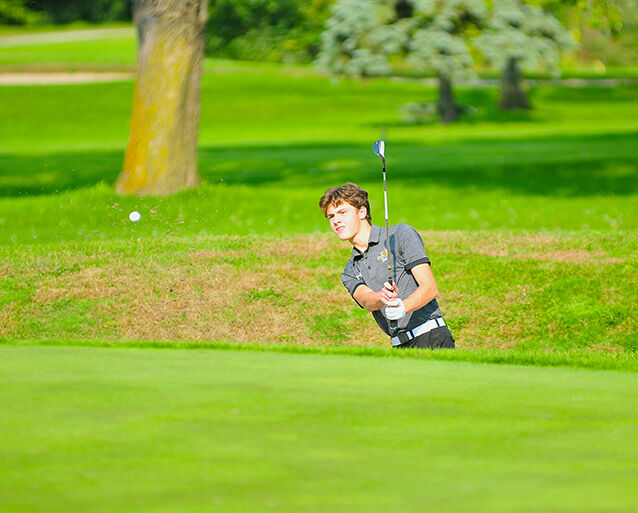 Marian Catholic junior Warner Ferry hits out of a sand trap at No. 10. Ferry finished with a 40 for the Spartans at Calumet Country Club. (Review photo)

Marian Catholic sophomore Casey Taylor chips onto the green at No. 10 at Calumet Country Club. Taylor shot 38 to lead the Spartans against Marist. (Review photo)

Marian Catholic junior Warner Ferry hits out of a sand trap at No. 10. Ferry finished with a 40 for the Spartans at Calumet Country Club. (Review photo)

It’s safe to say Casey Taylor has grown up around Marian Catholic sports.

His dad, Mike, has coached the Spartans varsity boys basketball team since 2003, compiling 309 wins since.

So, Casey, now a sophomore at Marian Catholic, is continuing to carve out his own athletic identity.

Taylor is in his second year on Marian’s varsity golf team and is one of the Spartans top golfers this season.

“It’s been great motivation watching my dad coach and my brother play baseball, basketball and football,” Casey said. “That’s huge motivation and great experience. Being No. 2 or 3 as a freshman was a cool experience. Now I have to help lead the way. Hopefully, we can make a run somewhere down the road.”

Taylor shot 38, one stroke behind medalist Nick Coccaro of Marist, as Marian Catholic (171) lost to the RedHawks (163) on Sept. 22 at Calumet Country Club in Homewood in an East Suburban Catholic Conference dual meet.

Taylor was consistent throughout his round, starting off with a sweet approach shot on No. 10.

From 93 yards out, Taylor hit a beauty to within two feet of the cup.

“That first hole, that was probably the best shot I had,” Taylor said. “I thought it was going in. I was very consistent with good iron play. It was a couple bad shots, but I felt good about my game.”

Also scoring for the Spartans were junior Warner Ferry (40), senior Pete Macasaet (45) and junior R.J. Kain (48). Paul Arquilla and Jack Kirsch shot 52 each to round out the lineup.

Ferry was coming off an impressive round at Calumet on Sept. 19 as he shot 77 to win medalist honors at the Marian Catholic Invite. The Spartans finished second at the four-team meet.

Ferry said he’s had some struggles at Calumet in the past but not recently.

“I’m going to be honest. Myself and this course haven’t gotten along together in the past,” Ferry said with a laugh. “It was just a good round. I stayed focused and calm the whole time. I’ve had some bad habits, but if I work on what I’ve been practicing, I should be all right.”

Ferry and Taylor have been a stable 1-2 punch at the top of the lineup for a young Marian Catholic squad.

Watching the group gel and gain experience, the duo is ready for some big-time team success.

“We’re young, and with a shortened season, the younger kids have great talent,” Taylor said. “We need to focus more and use that talent. We’ll get that mindset and do pretty good the next couple years.”

Marian Catholic played at St. Andrews Golf Club on Sept. 29, after press time, in the East Suburban Catholic Conference meet. The Spartans will host a Class 2A regional on Oct. 6 at Calumet.

The Illinois High School Association announced on Sept. 23 that a sectional round has been added to the state series, after originally just scheduling a regional.

The new sectional applies to boys and girls golf and cross-country. The sectional has yet to be scheduled.

Ferry is psyched for the chance to play into the fall.

“We can shoot great as a team,” Ferry said. “We have to make sure we’re on top of things and focused. We need to get it together, focus and shoot phenomenally. We can beat practically anybody. We need to make sure we can match teams hole for hole.”