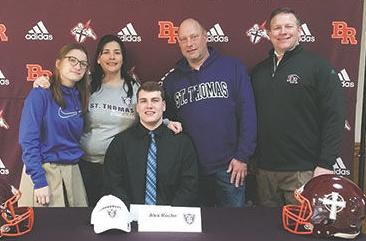 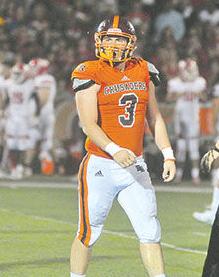 Alex Roche piled up 54 tackles, 16 tackles for loss and 6 sacks in his senior year for Br. Rice. (Review file photo) 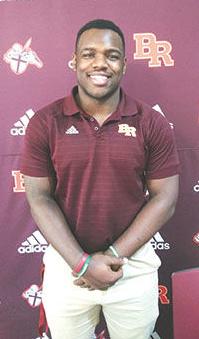 Alex Roche piled up 54 tackles, 16 tackles for loss and 6 sacks in his senior year for Br. Rice. (Review file photo)

As he looked ahead to choosing a college, Br. Rice senior Alex Roche had a difficult decision to make.

Would he pursue football or baseball?

For the Mt. Greenwood resident, the choice came back to his favorite sport.

“It came down to it that I’ve always been a football guy,” Roche said. “Football has been my thing since I was a kid. It’s football first.”

Roche signed his National Letter of Intent (NLI) on Feb. 5 to continue his academic/athletic career at the University of St. Thomas in St. Paul, Minn.

A 6’0”, 225-pound defensive lineman, Roche (St. John Fisher) was a two-year varsity player for the Crusaders. Helping the team to a second straight Class 8A semifinal berth, Roche finished his senior season with 54 tackles, 2 blocked passes, 6 sacks, a safety, an interception and 16 tackles for a loss.

Roche said he’s ready to prove himself at the next level.

“[St. Thomas] is getting a player with a work ethic who works his butt off,” Roche said. “In my four years there, I’m going to be someone they can count on.”

“I talked to Joe a lot,” Roche said. “He talked it up really highly and seemed really happy there. People go there and are ready to work. That’s why they’ve been so good these last few years.”

St. Thomas is in the process of moving from Division III to Division I, and the National Collegiate Athletic Association is set to make a decision on the move.

The plan would be for the Tommies to compete in the Pioneer League. But, wherever the program ends up, Roche will be ready.

“On the visit there, we sat down with [Coach Glenn Caruso] and talked about what he wanted with the program,” Roche said. “He’s disciplined but wants to have fun. When it’s time to work, it’s time to work. It just fit.”

Br. Rice senior Justin Jefferson was also set to sign his NLI on Feb. 5 as a preferred walk-on at Michigan State University—only to see the plan change.

Michigan State Coach Mark Dantonio suddenly resigned on Feb. 4. Jefferson has not ruled out still going to Michigan State, but his recruitment is open.

Jefferson was a three-year varsity player and an anchor on the defensive line. As a senior, he finished with 75 tackles, 18 tackles for loss, 8 hurries, 3 blocked passes and 3 sacks (-27 yards).

He is a 6’0”, 235-pound defensive lineman. Although not a typical height of that position, Jefferson said he’s ready to prove the doubters wrong.

“Any team that gets me, they’ll get a player who wants revenge,” Jefferson said. “I feel like I’ve been wronged. I’m a hard worker and a determined person.”