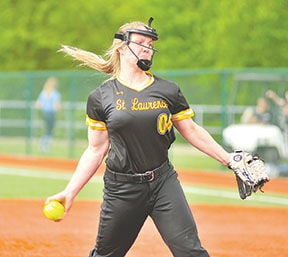 St. Laurence sophomore Abbey Pochie will be a key player at the dish and in the circle for the Vikings. Pochie switched from a right-handed hitter to a left-handed slap hitter in the offseason. (Review file photo) 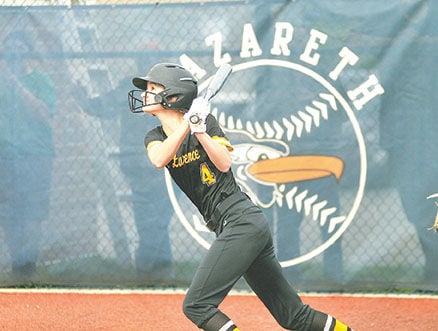 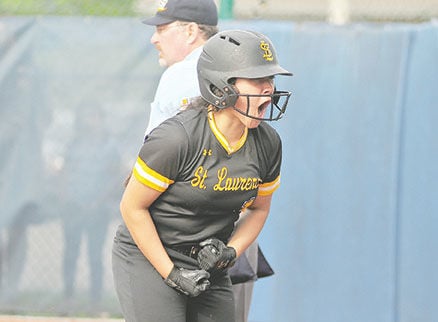 Sophomore Angelina Seropian will be a mainstay in the lineup and at first base for St. Laurence. Seropian committed just 1 error at first in her freshman season. (Review photo)

St. Laurence sophomore Abbey Pochie will be a key player at the dish and in the circle for the Vikings. Pochie switched from a right-handed hitter to a left-handed slap hitter in the offseason. (Review file photo)

Sophomore Angelina Seropian will be a mainstay in the lineup and at first base for St. Laurence. Seropian committed just 1 error at first in her freshman season. (Review photo)

However, in the offseason, she decided to change things up.

Pochie switched to the other side of the plate to turn herself into a left-handed slap hitter.

“When I was little, I started off hitting as a lefty. Then, I was probably 9, I switched to righty,” Pochie said. “I was talking to my dad last summer, and he asked if I wanted to try lefty again. I’m fast on the bases, but to try slapping? I thought it was insane, but I gave it a try. I started slow, but I really liked it.”

Pochie is a key returning player for a St. Laurence squad looking to build off its breakout 2019 campaign. The Vikings went 18-8, won the Girls Catholic Athletic Conference-White title and advanced to a Class 3A sectional championship game.

“We took a big step forward and got better through the experience,” Pochie said. “For me as a freshman, I was a nervous wreck my first game. We were playing teams with years and years of varsity experience. We knew how to swing a bat, though, and being strong mentally was so big.”

With the season on hold and potentially in doubt due to the COVID-19 pandemic, the Vikings are just hoping for a chance to take the field.

Pochie, first baseman Angelina Seropian and catcher Fiona Sjostrom headline a strong sophomore class that leads the way in the lineup and in the field.

Pochie won’t be alone on the pitching staff. The freshmen duo of Maddie Davis and Sarah Klonowski are both expected to throw quality innings.

“Maddie and Sarah are just awesome. The big thing is that they’re both so coachable,” said St. Laurence Coach Teagan Walsh. “Even the progress they made just through those two weeks of practice was impressive. They’re willing to take chances in the circle, and they have confidence, great movement and speed. We’re excited to see what they can do.”

Freshman Emma Lotus will step in to play center field to replace Colleen Schmit, now in her freshman year at Benedictine University.

Walsh said she’s curious to see if her talented squad can take another big step in the program’s fourth year.

“The thing that popped into my head was will this team build off of last year’s success,” Walsh said. “To do that, and we talked to the girls, to repeat it, you have to buy into it again, and this could be a special year.”

The Vikings have done their best to stay connected during the quarantine, practicing together via Zoom video calls, keeping an active group chat going and working on challenges assigned by Walsh.

“It’s easy to get distracted these days,” Hecker said. “The workouts are fun, and they hold us accountable and the team accountable. We’re trying to keep in contact. We’re upset and wish we were in different circumstances, but the workouts have been nice. They help us get up and go.”

Hecker has witnessed the work that she and her teammates have put in throughout a busy offseason and the unforeseen extended preseason.

She definitely hopes they get a chance to show off their hard-earned skills on the softball field—even a shortened season.

“As a senior, you want to play on your home field one last time,” Hecker said. “We worked on offense and defense, but we really worked on our mental side of the game. It’s the mental and physical sides of the games. We have a strong team with strong hitters, pitching and defense. We all trust each other.”