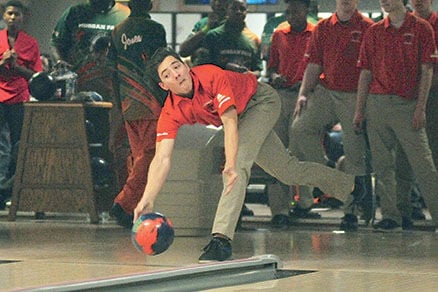 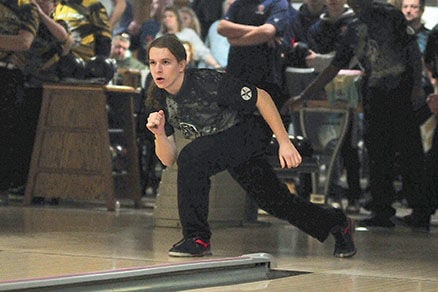 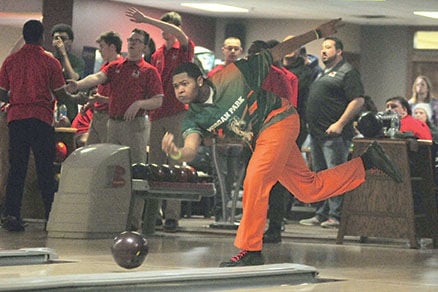 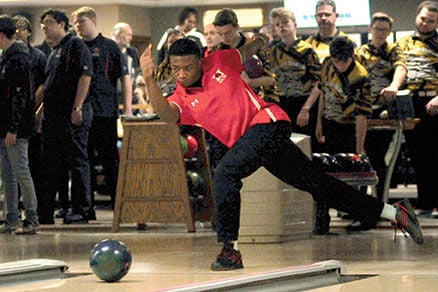 Marist junior Kivonte Houston advanced individually to the sectional with a fifth-place finish. He finished with a 267 high game during his 1,344 series. (Review photo)

Marist junior Kivonte Houston advanced individually to the sectional with a fifth-place finish. He finished with a 267 high game during his 1,344 series. (Review photo)

Tony Lundy headed into his sixth game at the Oak Lawn bowling regional well within striking distance of the top spot.

After rolling a series-low 193 in the fifth game, Lundy regrouped with a 254 in the sixth to clinch the comeback for top individual honors on Jan. 12 at Palos Lanes.

Br. Rice (6,322) finished second to Richards (6,661) in the team standings and advanced to the Andrew sectional.

“Going into the last game, I knew what I had to do,” Lundy said. “I was a little frustrated with how my last few games had turned out. I knew going into the sixth that I needed to put up a big number.”

The top four teams and the top 10 individuals from non-qualifying teams advanced to the Andrew sectional meet on Jan. 19 at Orland Bowl.

However, Lundy was more focused on his team’s success and getting the Crusaders to the sectional for a second straight year.

“My goal was top three. I didn’t want to think too high,” Lundy said. “The team was the biggest thing. I wanted the team to win more than me personally. Seeing the team do as well as we did, I’m really proud.”

Not far behind Lundy in the standings was teammate Eric Martinkus (1,363 series, 255 high game) in fourth place.

“Today was pretty great from the start. I bowled my high series and had a 227 average,” Martinkus said. “That’s pretty perfect.”

Martinkus has seen last year’s success roll over into this season as a majority of the team’s lineup returned.

“We only lost one senior from last year. We went to sectionals, and we’ve got that team chemistry,” Martinkus said. “It helps our confidence even more, so, hopefully, we go into next week with a big positive attitude.”

Just missing out last season in advancing as a team, the Mustangs raced into this year’s regional with a singular mindset: advance or bust.

Paced by senior Zach McCormick’s seventh-place finish (1,324 series, 257 high game), the Mustangs finished third in the team standings to qualify for the sectional.

“We came out here to make up for what happened last year,” McCormick said. “We wanted to show the rest of the regional what we can do.”

Looking to get back to state, McCormick is mentally prepared for another run. He said his plan includes “staying out of my head, being consistent and making good shots.”

His performance at the regional sets the stage for the next step.

“I made my spares today and was 100 percent on 10 pins,” McCormick said. “I’ve got to do the same thing at sectionals and get myself down to state again.”

Courtesy of a down 919 series as a team in the fourth game, MPHS was in a hole. If the Mustangs wanted to advance as a team, the turnaround had better start quickly.

“We had to make shots, make spares and get it done,” Lyons said. “We couldn’t beat ourselves or stay down. We had to keep fighting.”

A four-year varsity bowler, Lyons has been a staple in the MPHS lineup. He intended to make the most of his captaincy in helping a young team develop.

“Since I’m the captain, I’ve got to keep their heads in shape. I can’t let them give up,” Lyons said. “I knew I needed a big effort late; we needed it. We were down and needed a push.”

A talented junior defensive back on the football team, Kivonte Houston was a little late joining the bowling team this season as the RedHawks advanced to the Class-8A state semifinals.

Once he was back on the lanes, Houston was raring to go. Competing at the regional, he finished fifth in the individual standings. He advanced with a 1,344 series and 267 high game.

“Right after football, I jumped back into bowling,” Houston said. “Coach Mike Brennan said I’d be a leader, and I needed to help these guys out. I put the time and effort in and was able to get back into my rhythm.”

For Houston, bowling is in his blood.

His grandfather, Reginald Lee, is the boys bowling coach at Joliet West.

“I’ve been bowling all my life. It’s a family thing,” Houston said. “I’ve worked with my granddad a lot. We’ll bowl two or three hours, and he’ll tune me up. He’ll get my fundamentals where they need to be. You want to be fundamentally sound in these tournaments and trust what your ball is going to do.”

Houston closed strong with a 267 and 223 in his final two games.

“When you get on a streak, it’s ‘The Zone,’” Houston said. “You stay there, stay consistent and throw the same shot. It becomes muscle memory. I wanted to keep it going.”

Freshman Zachary Reynolds advanced individually with a 1,177 series, a 236 high game and 196 average.