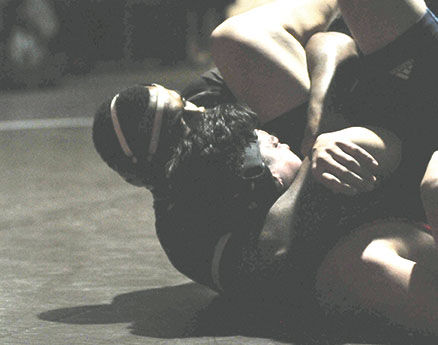 Mt. Carmel senior Jalen Grant works for a quick pin on Senior Night. Grant transitioned smoothly from a state championship football season to wrestling, and he has been a strong presence at heavyweight for the Caravan. (Review photo) 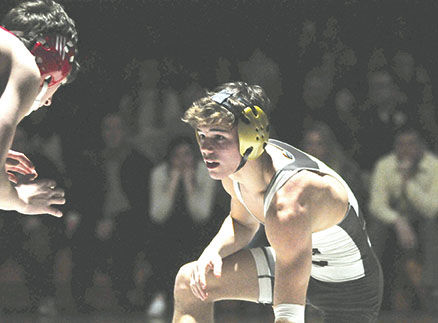 Senior Colton Drousias, the defending state champ at 113 pounds, has wrestled at 120 pounds this season. On Senior Night, he wrestled two classes up at 132 pounds. (Review photo) 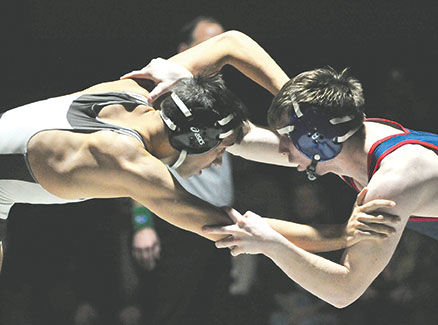 Mt. Carmel senior Jalen Grant works for a quick pin on Senior Night. Grant transitioned smoothly from a state championship football season to wrestling, and he has been a strong presence at heavyweight for the Caravan. (Review photo)

Senior Colton Drousias, the defending state champ at 113 pounds, has wrestled at 120 pounds this season. On Senior Night, he wrestled two classes up at 132 pounds. (Review photo)

Jalen Grant was a force for the Mt. Carmel football team last fall, a terror on opposing offenses as a defensive lineman and a wall protecting the Caravan as an offensive lineman.

And now as a wrestler after a busy state championship football season, that two-way effort is again paying off as Grant, a Bowling Green University football recruit, transitioned seamlessly to the wrestling team.

“I was going both ways on the offensive and defensive lines, and that forced me to keep my weight down,” Grant said. “I wanted to play to the best of my ability. For wrestling, I came in at 260. I’m feeling great.”

Winning his heavyweight match with a pin in 26 seconds on Jan. 9, Grant was one of many strong Caravan performers as host Mt. Carmel dominated its Senior Night with a 61-9 dual-meet win over rival St. Rita.

The Caravan finished with 7 pins and 2 technical falls.

With the postseason approaching, Grant said the Mt. Carmel lineup is outstanding.

“The team is doing great, and I’m really proud of the guys for going out and working hard,” Grant said. “We’re playing for each other out on the mats. It was bittersweet tonight because it’s my last year wrestling, but we’re looking forward to the postseason.”

The defending Class 3A state champion at 113 pounds, Mt. Carmel senior Colton Drousias has bumped up to wrestle at 120 pounds this season.

Looking to help the team fill out a Senior Night lineup, Drousias competed at 132 pounds, winning with a pin in 3:41.

Drousias has thrived, even with a target on his back.

“My first match [this year], the kid came after me and wanted nothing to do with me except smack me around,” Drousias said. “Ever since, I knew I needed to stay focused and attack everyone like it was a state finals match.”

Tested by a brutal schedule all season, Colton Drousias has seen the team embrace each challenge as it comes.

Mt. Carmel finished second at the Dvorak Invite in mid-December and the Cheesehead Invite in Wisconsin in early January.

“We’re a little banged up, so we’re resting and recuperating and getting ready to go for the postseason,” Drousias said. “We want to win as many individual state titles as we can and then the state title as a team, too.”

Mt. Carmel will compete at the Chicago Catholic League (CCL) meet on Jan. 25 at Providence Catholic.

The Caravan, the No.-2 ranked team in Class 3A behind CCL rival Montini, could potentially face the Broncos in the dual-team state championship in late February in Bloomington.

Two of the best teams in the state in recent years, Mt. Carmel and Montini have squared off during the last three seasons at the sectional.

“After the draws we’ve gotten, it’s a little more inspirational for the guys this year,” said Mt. Carmel Coach Alex Tsirtsis. “To know that, after the individual state tournament, it’s bracketed where the top two teams are separate, that’s motivation to get through the individual and then be excited for the team aspect, too.”