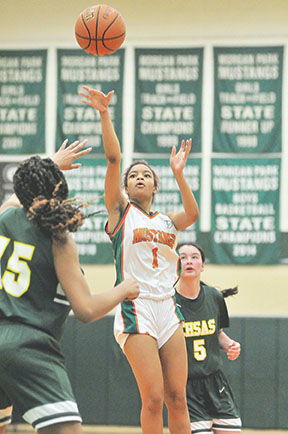 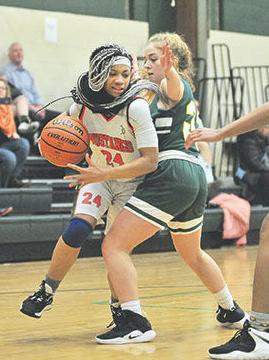 The shots weren’t dropping; the passes weren’t sharp; and the Morgan Park High School (MPHS) Mustangs were in an early funk in the first round of the Chicago Public Schools playoffs.

Nothing was going right for the Mustangs against the Chicago High School for Agricultural Sciences (CHSAS) on Jan. 28, and junior guard Kapri Williams knew something had to give.

“We were playing like we were stuck in the mud,” she said. “We had to fix the energy and turn it around.”

The Mustangs did just that in the second quarter, and host MPHS clicked on all cylinders, going up huge on their way to a 68-34 victory.

“We had to change the energy of the game. It was just bad energy,” Williams said. “We had to get out of that slump.”

Williams, a 5’4” junior, provided the biggest spark, pouring in a career-high 32 points and adding 6 steals.

MPHS advanced to play host Payton on Jan. 31, winning 66-57 to advance to the quarterfinals. The Mustangs will play at rival Simeon on Feb. 5.

In the CHSAS win, a sluggish effort early put the Mustangs in a 17-14 hole early in the second quarter. From there, it was all MPHS.

Using a halfcourt press, Williams, Rogers and the Mustangs’ defense wreaked havoc on the Cyclones, forcing 7 turnovers in the second quarter.

The Mustangs closed the quarter on a commanding 23-0 run, with Williams scoring 10 points as part of the onslaught. MPHS led 37-17 at halftime.

MPHS Coach Thomas Johnson continues to see improvement from his junior guard who’s played with the varsity for three seasons.

“Kapri has been a little inconsistent, but she’s been getting better game by game,” Johnson said. “She just has to believe in her coaching staff. She’s just trying to get better.”

CHSAS was stifled by the Mustangs’ ball-hawking defense, which has been a go-to facet of the game for MPHS.

“Our defense has been a strength for us,” Rogers said. “They were struggling to get past halfcourt in our traps. They were stuck when we started pressing.”

With the Mustangs’ overall record hovering around .500 for much of the year, Williams hopes a late-season push can produce MPHS some hard-earned wins.

“I don’t like having a losing season. I want us to have won more games,” Williams said. “As a team, we’re the underdogs. The underdog has to push its way through.”

Going forward, Johnson said he hopes the early struggles have taught his team some lessons.

“Focus, we’re not focused,” Johnson said. “They were focused today, but it took them a little wake-up call to wake up and play.”