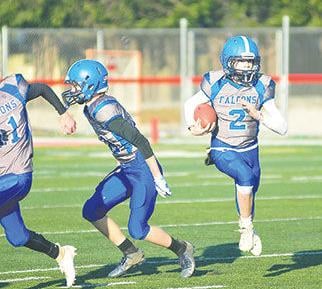 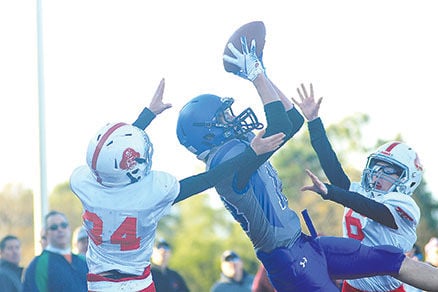 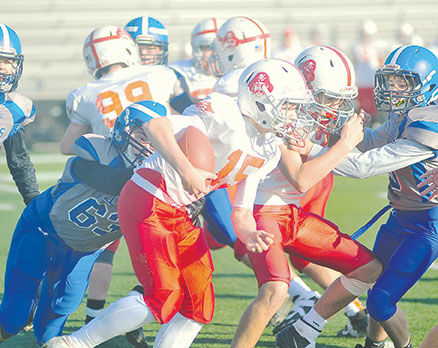 Most Holy Redeemer running back Noah Gertonson works through the defense in the Gold Ball game. (Review photo)

Most Holy Redeemer running back Noah Gertonson works through the defense in the Gold Ball game. (Review photo)

Making their varsity debut a year ago as seventh-graders for St. John Fisher, Owen Winters and his teammates endured an injury-plagued season as a young team that struggled to click.

This year, Winters and his fellow eighth-graders weren’t going to endure a second straight losing campaign.

Exacting some revenge from a regular-season loss, St. John Fisher (SJF) rolled to a 36-0 victory over Most Holy Redeemer (MHR) on Nov. 3 at Marist High School to win the Southside Catholic Conference Gold Ball trophy.

“This was really important for us,” Winters said. “As seventh-graders, we played a little scared. We came out thinking we were going to do really well this year. We came out and did it.”

The Gold Ball was the first for St. John Fisher since 1998.

Running a spread offense, SJF Coach Mark Fennell said he had a special weapon at quarterback in Winters.

“To be able to have a dual-threat QB who is actually a dual threat who can pass and run, it’s everything,” Fennell said. “We have receivers who can catch, and Owen was on the money today and played an all-around game.”

Winters opened the scoring with a 14-yard run late in the first quarter. After the defense forced a quick 3-and-out, Winters hit Jack Perry behind the MHR secondary for a 32-yard TD.

The high-flying win came after the Falcons lost 18-7 to MHR in late September playing in extremely muddy conditions at Beverly Park.

“We couldn’t do anything that game,” Winters said. “We got some revenge. Our line is great at blocking. We know we can run the ball and score.”

Tom Sloyan added 49 rushing yards and a receiving TD, a pretty 20-yard catch in double coverage in the end zone.

“You’ve got to be confident in your offense,” Sloyan said. “It means a lot that we won. It’s been a long time.”

Elijah Nelson added a late rushing TD for the Falcons.

MHR finished with a 9-1 record.

Although disappointed with the loss, Coach Mark Phelan took nothing away from a memorable season.

“We have a great group of kids. They worked really hard,” Phelan said. “They’ve gotten so much better throughout the season. I couldn’t be prouder. I thank the parents for sending me such great kids. It makes it easier.”

Phelan is assisted by Luke and Matt Phelan.