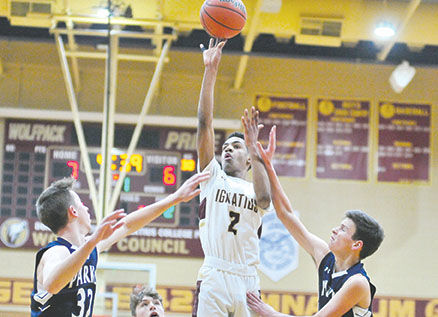 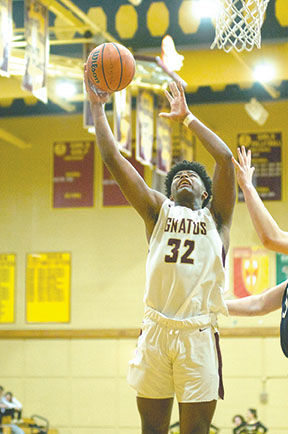 Sophomore forward Kolby Gilles chipped in with 8 points and 5 rebounds for the Wolfpack. (Review photo) 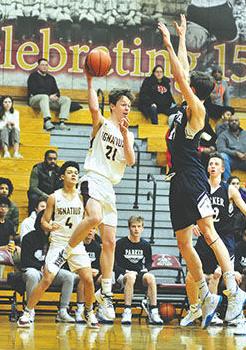 Sophomore forward Kolby Gilles chipped in with 8 points and 5 rebounds for the Wolfpack. (Review photo)

As a freshman on the St. Ignatius varsity team last season, A.J. Redd was thrown into the fire.

However, through the ups and downs of a tough season with a young team that struggled to a 14-18 record, Redd picked up tons of valuable experience.

Now, the sophomore guard is using what he learned to help a Wolfpack squad that continues to put last season in the rearview mirror after beating Francis Parker 65-45 in nonconference action on Feb. 1 at home.

“Last year considering our record, no one expected us to come in and play the way we’ve been performing so far,” Redd said. “We talk about it before games and practices, but no one knows how good we are except ourselves.”

Redd finished with 18 points and 7 rebounds for the Wolfpack.

Ten players scored for the Wolfpack against Francis Parker.

Redd, a 6’3” guard who is able to shoot from the perimeter or slash to the hoop, scored 9 points in the first half as St. Ignatius took a 38-25 halftime lead during a physical and closely called contest.

“For me, the game is slowing down a lot, especially bringing the ball up under pressure,” Redd said. “I’m finding my shot better. Last year was an experience year. I was thrown out there, and I’m trying to make adjustments this year.”

Injecting some sophomore youth into the lineup, Redd and Gilles have quite a history together. They are both from Hyde Park and played together starting in sixth grade on the Mac Irvin Fire club basketball team.

“We lived like five minutes away from each other, but we first met through [club ball],” Gilles said. “We went to different grammar schools, but we’ve known each other a long time and hung out. We work out together, and we have a good relationship.”

Gilles played on the sophomore and varsity teams last season as a freshman, splitting time between the two.

A staple in the starting lineup as a sophomore now, Gilles has thrived on varsity.

“I’m playing a lot more this year. It’s playing good team basketball,” Gilles said. “My team’s been finding me under the basket, and we’re moving the ball well. We create driving lanes, and compared to our losses, we play great team basketball.”

St. Ignatius will compete in the upcoming Class 3A playoffs, and the bracket will be released on Feb. 21. The Wolfpack has a 7-3 record in the Chicago Catholic League (CCL)-Blue and is trailing Loyola (10-0), DePaul Prep (9-1), Fenwick (9-1) and Br. Rice (8-2) in the standings with five league games remaining.

“We’ve still got to finish out this season,” Gilles said. “We need to keep taking care of business. We’ve got some big games coming up with De La Salle and after them. It’s one game at a time to help that push toward a good seed in the playoffs.”

“We call it the ‘Revenge Tour’ right now because these are all the teams we lost to,” Redd said. “We won two CCL games last year. We’re playing with confidence and a chip on our shoulder.”