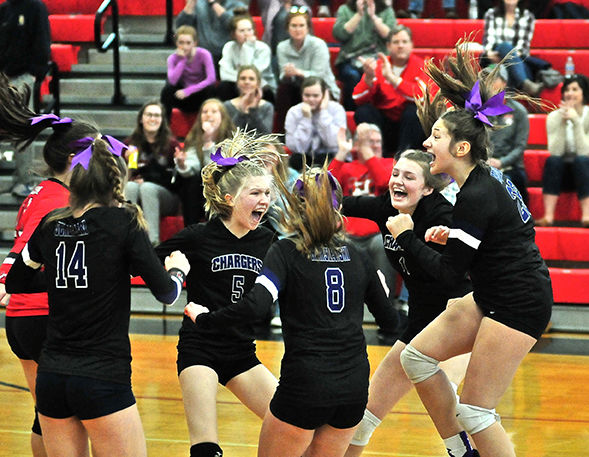 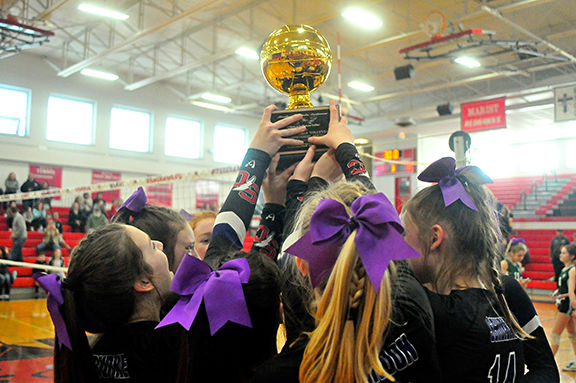 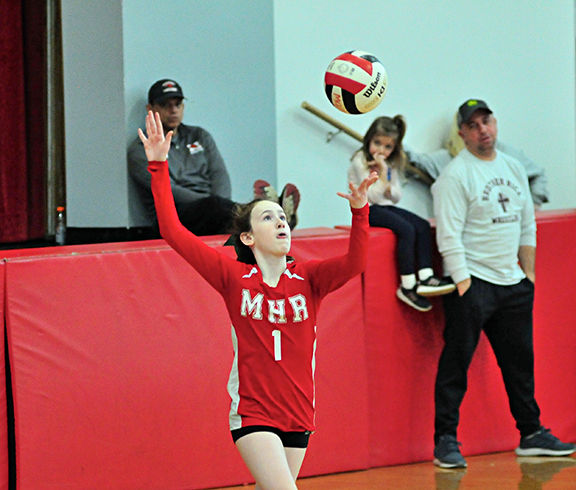 Most Holy Redeemer outside hitter Abbey Williams strung together a kill and four straight aces late in the third set as the Raiders prevailed for the Southside Catholic Conference seventh-grade championship. (Review photo) 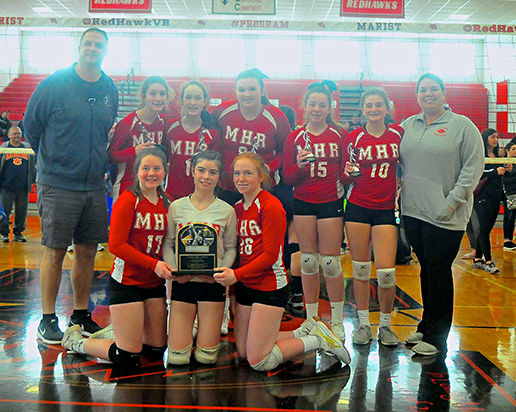 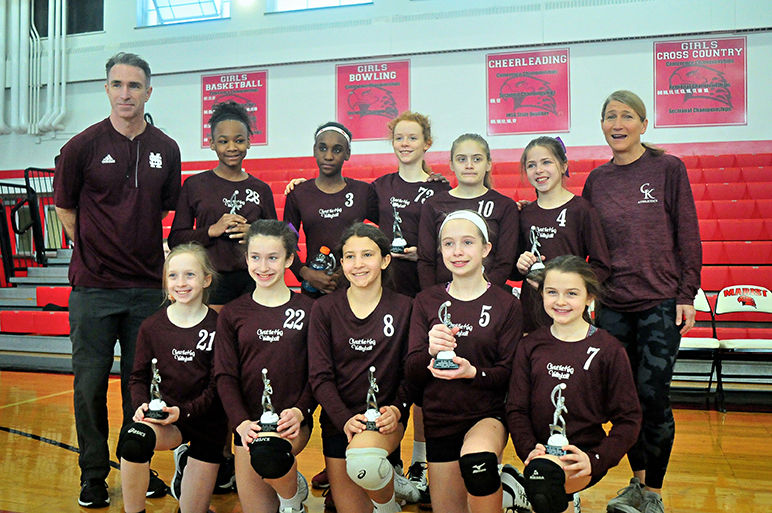 The Christ the King sixth-grade volleyball team finished as the league runner-up after a tough two-set loss to St. Daniel the Prophet. (Review photo)

Most Holy Redeemer outside hitter Abbey Williams strung together a kill and four straight aces late in the third set as the Raiders prevailed for the Southside Catholic Conference seventh-grade championship. (Review photo)

The Christ the King sixth-grade volleyball team finished as the league runner-up after a tough two-set loss to St. Daniel the Prophet. (Review photo)

The St. Catherine of Alexandria eighth-grade girls basketball team rolled through the fall season on the way to the Southside Catholic Conference (SSC) Gold Ball championship.

The Chargers volleyball team picked up right where basketball left off.

“It was just a team effort, and our excitement from basketball rolled over to volleyball season,” setter Camryn Lyons said. “We won as a team and everyone played their role. That helped us win both Gold Ball trophies.”

Coach Katie Lyons said the potential of winning two league titles as eighth-graders did not weigh on the team. The Chargers just went out and played their game.

“We’re big on goal-setting, but I don’t think it was on their minds, that pressure,” Lyons said. “We set the goal early to win it. We kept talking about it, working toward it, and it worked out.”

In a 11-7 deficit in the third against a hot-hitting St. Alexander squad, Schoeberl and Lyons helped power a turnaround for St. Catherine. The duo both smashed a kill apiece that also included two Alexander errors.

Now tied at 11, the Chargers pushed with a 6-2 run sparked by a Ternes ace and Schoeberl’s 10th kill of the match.

No matter the game situation, up big or even down big, Schoeberl said her teammates always deliver in the clutch.

“We basically come together as a team and try to calm each other down,” Schoeberl said. “Just get the ball over and do our best to score some points and win.”

After one last St. Alexander charge, St. Catherine closed with two Raider errors and a kill apiece from Lyons and Schoeberl.

Schoeberl, an outside hitter and setter, also played on the basketball team.

“It’s crazy. Our last 2 games as a team, we won those games,” Schoeberl said. “We played together, and it showed how much support we have as a team.”

Lyons and Schoeberl were both named to the SSC All-Conference Volleyball team. They will both attend Marist next year.

“We’re really close friends,” Lyons said. “I know if I set her, she’ll do anything she can to keep the ball in for the team. I just trust her.”

Lyons was consistently impressed with her team’s athletic ability. St. Catherine also won the basketball and volleyball championships during the 2015-16 athletic year.

“The funny thing about this group is we only have one girl who plays club volleyball,” Lyons said. “The rest are just good athletes who work hard every day and do what the coaches ask them. You don’t find kids like that very often.”

Looking to close out the seventh-grade championship, Most Holy Redeemer (MHR) had hit a roadblock.

St. Daniel was charging, and the Raiders needed a response.

MHR received big efforts from a trio of players late as the Raiders defeated St. Daniel 25-23, 19-21, 21-17 on March 8 for the SSC Seventh-Grade Red division champion.

“We talked about keeping our composure and not dwelling on past mistakes,” MHR Coach Carrie Berry said. “We were focusing on mistakes, but we needed to move forward. There was a lot of game left.”

Off a 13-13 tie in the third set, Abbey Williams ripped her eighth kill of the match. She then stepped to the service line and served up 4 straight aces as the Raiders regained control for good.

MHR closed out the win behind a Maddie Berry dump kill and Ava Stratton’s game-winning kill into the defense.

“One of our strengths as a team is our serving, so we can always fight back,” Berry said. “This was our 10th championship overall with tournaments and leagues. We have our eye on the Gold Ball next year. That’s the goal in eighth grade.”

Janie Buckley led the Screaming Eagles with 4 kills and 4 assists.