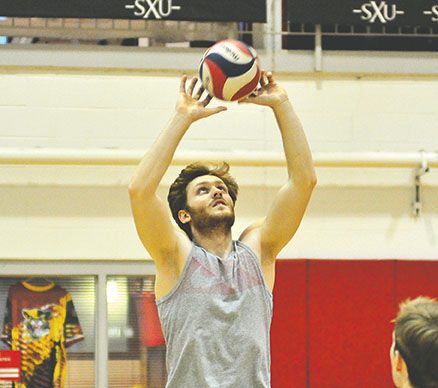 Granted an extra year of eligibility by the National Association of Intercollegiate Athletics due to the COVID-19 pandemic, St. Xavier senior setter Aaron Kummer plans to return for the Cougars next year as a grad student. (Review file photo) 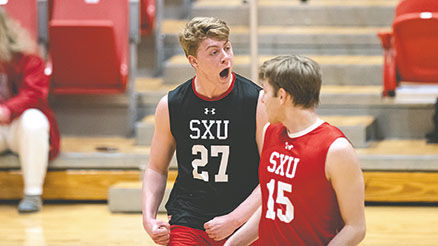 Junior outside hitter Grant Ooms (27) finished with a team-high 237 kills in 18 matches for St. Xavier in a season shortened by the coronavirus. Ooms’ brother, Shane, headlines the incoming freshmen recruiting class. (photo courtesy of St. Xavier)

Granted an extra year of eligibility by the National Association of Intercollegiate Athletics due to the COVID-19 pandemic, St. Xavier senior setter Aaron Kummer plans to return for the Cougars next year as a grad student. (Review file photo)

Junior outside hitter Grant Ooms (27) finished with a team-high 237 kills in 18 matches for St. Xavier in a season shortened by the coronavirus. Ooms’ brother, Shane, headlines the incoming freshmen recruiting class. (photo courtesy of St. Xavier)

As a senior setter with the St. Xavier University (SXU) men’s volleyball team, Aaron Kummer couldn’t help but feel bummed out after seeing the recruiting class for next season.

With all that talent coming in, Kummer knew he would be missing out on some great volleyball after his graduation in May.

“It’s a pretty electric group. I was able to help recruiting and saw these guys,” Kummer said. “They’d be coming in next fall, so I was pretty jealous that I wouldn’t get a chance to play with them.”

Well, that’s what he thought.

With the COVID-19 pandemic impacting sports on so many levels, Kummer is among the athletes whose plans were changed in a big way.

After the National Association of Intercollegiate Athletics (NAIA) canceled all its spring sports seasons and championships due to the pandemic, the NAIA then granted all spring sports student-athletes an extra year of eligibility.

Kummer plans on taking full advantage of the opportunity and will return to play at SXU as a graduate student on the 2021 team.

“I’d thought about it starting the year, start going after my master’s degree,” Kummer said. “That extra year of eligibility, it seemed like the better route now where I get to play another year, too.”

Kummer, a Morgan Park resident and Marist High School graduate, has been a steady four-year starting setter for the Cougars as the program continues to forge its identity.

The 6’2” setter has accumulated 2,485 assists in three-plus seasons.

SXU Coach Tom Ryan is glad to have his veteran setter back, especially with options galore for Kummer at outside hitter, middle and right side hitter.

“Aaron has been a big player ever since he walked in the door,” Ryan said. “I’ve developed a good communication with him on what needs to be done. You need that with your setter. Aaron has been a big contributor, and he’ll be a huge aspect of a great squad in 2021.”

On March 6, in its last match of the year before the NAIA canceled the remainder of the season, SXU lost to Siena Heights University in 4 sets.

The news of a season cut short, Kummer said, was hard to handle for the volleyball team.

“It was kind of shocking,” he said. “We were focused on the conference tournament, focused on getting back to nationals. Then we got a text that our St. Ambrose matchup was canceled, and then the whole season was canceled. We were shocked.”

The Cougars finished the season 11-7.

Following a breakout 2019 campaign, the 2020 season record was a bit of a disappointment for Ryan in his second year as head coach. SXU advanced to nationals last season for the first time in the program’s history.

The team played its first season in 2010.

“We took a big step my first year. It felt a little like we took a step forward, two steps back this year, but we learned a lot,” Ryan said. “We’re bullish about the future. We’ve got all the pieces, all the personalities you need to win. We’re excited for the year.”

Mason Nafziger (Bloomington) and Mitchell Seggerman (Iowa) round out the recruiting class.

The timeline going forward is still up for grabs as the COVID-19 crisis continues, but Kummer is excited to get back in the gym.

“It’s kind of wait and see. We all want to get back in the gym this summer for some open gyms like we usually do,” Kummer said. “It doesn’t seem likely right now, but you never know. Hopefully, it all works out soon.”