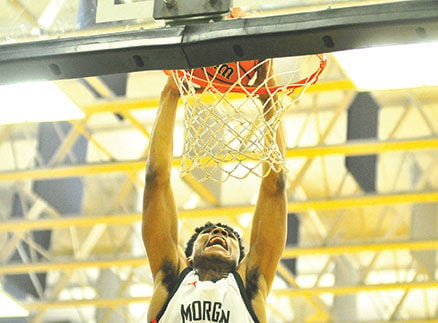 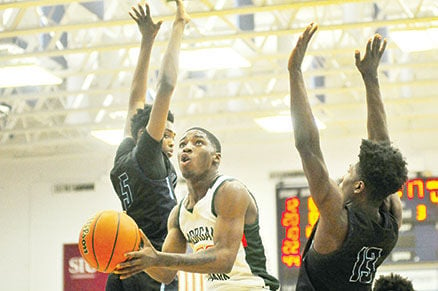 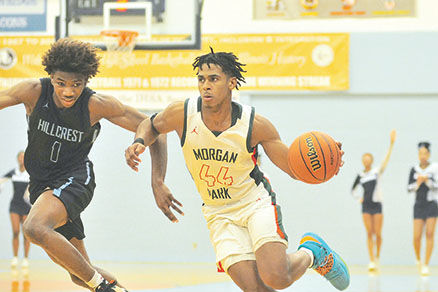 In Adam Miller and Marcus Watson, the Morgan Park High School (MPHS) basketball team has two senior guards who are capable of carrying the Mustangs in any given game.

And then, there’s junior Brandon Weston, a super-talented 6’5” guard/forward who doesn’t always get attention that his senior teammates do.

However, as Weston continued to show, opponents should be paying all sorts of attention to his play.

Pouring in 29 points and adding 12 rebounds, Weston helped power Morgan Park to a physical 73-69 victory on March 10 over Hillcrest in a Class 3A Thornridge Sectional semifinal.

“We have three great scorers on the team,” Weston said. “I’ve got to let people know ‘Hey, I’m here too.’ When we’re all going, it can be scary. I’ve got to make sure I produce.”

MPHS was scheduled to play Kankakee (27-4) in the sectional championship on March 13, but the Illinois High School Association cancelled the remainder of the boys basketball state playoffs on March 12 due to concerns over the COVID-19 pandemic.

In the Hillcrest win, Weston delivered a huge performance as the Hawks slowed Miller (Illinois) and Watson (Wake Forest) for the first half.

Battling through a physical, foul-plagued half, Weston kept the Mustangs alive with 12 early points. The two teams combined to shoot 40 free throws in the first half.

“Brandon is a punisher,” Miller said. “A lot of teams try to box-and-one me, so I tell him you better eat off that. You can’t let teams disrespect you like that. He comes out and performs. Teams are looking at me, so go take off their head. He did it tonight, and we got the win.”

Watson was held to 3 points in the half. Miller scored just 2.

Opening things up in the second half, MPHS pushed back in a big way. Working against a 43-39 deficit, Miller split free throws and then scored on a putback on the team’s third shot of the possession.

Then, after two Hillcrest baskets, Miller converted a 3-point play on an athletic drive toward the hoop.

Watson closed the quarter in style, scoring on two crazy drives through the defense for some more athletic and acrobatic baskets to tie the game at 49 though three quarters.

As his shots weren’t dropping early and turnovers started to pile up, Watson, a 6’1” guard, knew to stuck with his game. His time to deliver would come.

“For me, the game wasn’t coming to me in the first half,” Watson said. “My teammates kept me involved and motivated me to keep going. Those plays down the stretch were big plays like big guards in the [Atlantic Coast Conference] would make.”

Since 2011, the Mustangs and Hawks have faced off in the Class 3A playoffs six times.