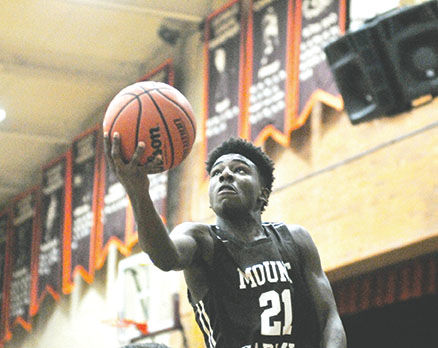 Mt. Carmel freshman guard Deandre Craig goes up hard for a basket. Craig finished with 10 points, including some key plays down the stretch in a comeback win. (Review photo) 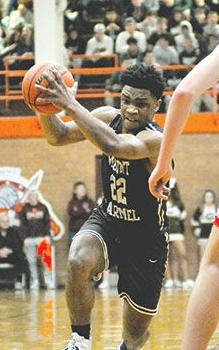 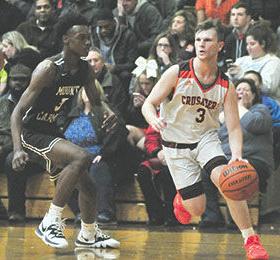 Mt. Carmel freshman guard Deandre Craig goes up hard for a basket. Craig finished with 10 points, including some key plays down the stretch in a comeback win. (Review photo)

Craig, a freshman playing key minutes, is in the same spot that Bennett was in two years ago as a sophomore making the jump to varsity.

So, each game, Bennett offers Craig the same advice: stay calm, and the rest will take care of itself.

Judging by the results, Craig has definitely been listening.

Craig finished with 10 points, including 8 in the fourth quarter, and delivered a key steal late as Mt. Carmel mounted an impressive comeback in a 66-60 win at Br. Rice on Jan. 10 in a Chicago Catholic League (CCL) crossover.

“Deandre is a great player. He’s better than I was,” Bennett said with a laugh. “He’s using that talent and confidence and taking advantage. He’s calmed down and is getting that varsity experience and taking full advantage.”

As for Craig (Beverly, Sutherland), he admitted to some nerves. However, they weren’t on display as the 5’10” guard swished 4 free throws in the final minute. He also intercepted a Br. Rice pass in the closing minute.

“I was very nervous. It’s a big crowd out there,” Craig said. “My teammates have been a big part of my success because they’ve picked me up when I’ve been down. They’ve always been there for me.”

Mt. Carmel trailed by 11 points late in the second quarter and 9 points in the third, but a big effort from Bennett and Matt Hawkins sparked the turnaround.

Hawkins poured in 10 points in the third, and Bennett (St. Barnabas) added 5 as the Caravan drew to within striking distance, heading into the fourth down 48-45.

In the fourth, Craig shined. The freshman’s steal and fast-break bucket gave Mt. Carmel its first lead at 54-52. Later, his coast-to-coast hard drive extended the advantage to 62-58 with 33 seconds remaining.

Then, his 4-for-4 free-throw shooting in the final 14 seconds iced the game.

“I clear my head and take my time,” Craig said. “I practice those in the gym by myself. My first couple games, I was doing terrible. I was turning the ball over, but now that I’m used to [the varsity speed], it’s like playing back in eighth grade.”

“After our Christmas tournament, it was a new year, so we were going to wipe the slate clean mentally,” Bennett said. “Our record wouldn’t be wiped clean, but mentally it was a fresh start. We’re going to play our hearts out. We haven’t been poised when things aren’t going our way. We calmed down and trusted our coaches.”

“They came out and played really hard,” Glennon said. “We had a lot of chances down the stretch to win. A couple layups here, don’t turn the ball over there, and we could have gone up 6 or 8 in some spots.”

Br. Rice remains in the thick of the top-heavy CCL-Blue standings.

“There are a lot of great teams in the CCL this year. We play all the top teams coming up back to back,” Glennon said. “This game shows that we can’t just take the floor and expect to beat anybody. It’ll be a grind the rest of the year.”