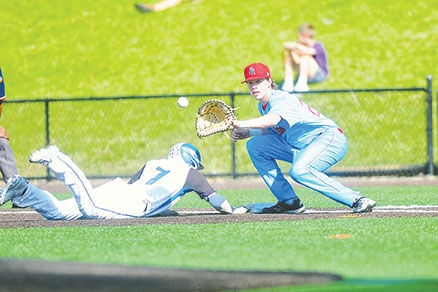 St. Rita senior Chris McDevitt will see time at first base and catcher for the Mustangs. McDevitt is an Indiana State recruit. (Review file photo) 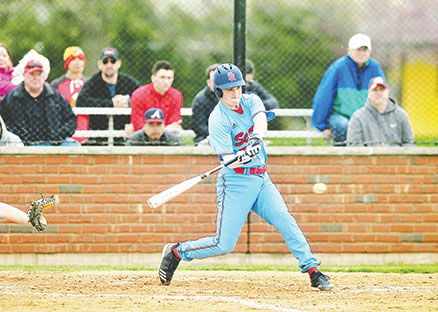 Senior Luke Napleton is a three-year varsity player for St. Rita. He hit .365 as a junior with 4 home runs and 36 RBI. Napleton is a Quincy University recruit. (Review file photo) 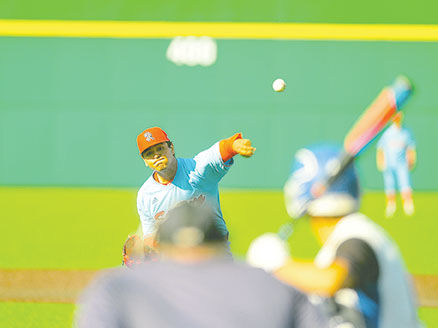 St. Rita senior Chris McDevitt will see time at first base and catcher for the Mustangs. McDevitt is an Indiana State recruit. (Review file photo)

Senior Luke Napleton is a three-year varsity player for St. Rita. He hit .365 as a junior with 4 home runs and 36 RBI. Napleton is a Quincy University recruit. (Review file photo)

Chris McDevitt will head to Indiana State University this fall as a student-athlete to play catcher on the baseball team.

But, in the meantime, he’s just hoping to take the field for his senior season at St. Rita.

During his junior year, McDevitt was an everyday starter assigned primarily to first base, but as for what position he’ll play this year, he doesn’t care.

“I came in at St. Rita playing third as a freshman. When Luke Napleton was catching for the varsity, I played catcher for the sophomores,” McDevitt said. “We’ll play it by ear, but it’s whatever is best for the team. Luke won’t catch every game. We’re here to play and to win.”

McDevitt is one of several key players for a Mustangs squad looking to leave its own mark after the 2019 team finished fourth in the state in Class 4A.

Although St. Rita lost the star players who were part of a gritty senior class, including Oakland A’s draftee Jalen Greer, the cupboard is far from bare.

St. Rita Coach John Nee isn’t worried about any drop-off, especially with a new crop of seniors, including McDevitt and Napleton, leading the way.

At a practice at the Bo Jackson Dome in Lockport before the COVID-19 pandemic put the season on hold, Nee had all the proof he needed.

“With a good team, it’s often more what you hear than what you see,” Nee said. “We were going through our infield pregame, and it just sounded different. There was a great energy out there. It was something different, and it clicked for me in that moment.”

Napleton, a Quincy University recruit, is a three-year varsity starter. He was also an all-state player for St. Rita’s hockey team. Juggling hockey games and practices with winter baseball workouts, Napleton did his best to always be in attendance.

“Luke has really emerged as one of our leaders,” Nee said. “He’s a heck of a hockey player, too, but after an 8 p.m. game the night before, he’d be there the next morning before school lifting during the season. It was all the time.”

However, Napleton said it was an easy decision.

“We’d lift Monday, Wednesday, Friday, and I went to a majority of them,” Napleton said. “If I was feeling really banged up, I wouldn’t lift, but I’d still be there supporting the guys. I felt like it was my responsibility to be there.”

The Mustangs lineup will be built around McDevitt (St. Cajetan), Napleton and juniors Bobby Atkinson and Al Holguin. Atkinson was limited to batting as a sophomore as he dealt with a shoulder injury.

McDevitt will rotate at catcher and first, with Napleton starting at catcher but also playing left field. When he’s not pitching, Holguin can start at first.

“To be honest, the most concerning thing was the seniors we lost, their grittiness. Guys like Matt Callahan, Brendan Carrane, Matt Dunleavy,” Nee said. “But, this is a special senior class. We’ve got 15 seniors who are very hungry. We’re still very talented.”

Nee is especially impressed by the Mustangs’ pitching staff. Starter Jimmy Moylan was lost to Tommy John surgery this winter, but Holguin and seniors Justin Valdez and Luke Carroll were ready to carry the pitching duties.

“Losing Jimmy was a huge blow to the pitching staff, but Al really came on last year,” Nee said. “He’s that next guy up. He had an unbelievable offseason. Valdez is going to be a huge piece, and Carroll was our ‘Mr. Steady’ last year. He’s a guy you can count on to throw strikes.”

For McDevitt, with hopes of getting a shortened season in during May and June, he knows his teammates will again adopt an underdog mentality.

“We know we don’t have the highest-ranked guys. We don’t care,” he said. “The ranks don’t matter. No one knew a lot of our guys last year. It’s the same thing this year. Whether it’s big-time Division I or [National Association of Intercollegiate Athletics] guys, we’re out there to play. We can win a lot of games with no-name kids.”

Hoping for any season at all, Napleton remains confident in his team and positive about the future.

“It’s sad, disappointing, we’re not playing, especially for my senior year,” Napleton said. “We’re focusing on getting better. We have a lot of experience, so even if it’s only a two or three-week season, we’ll aim to make a push. We’re staying positive. We’re definitely capable of winning a ring.”