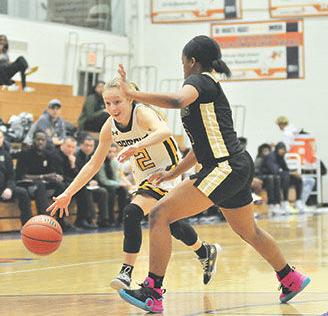 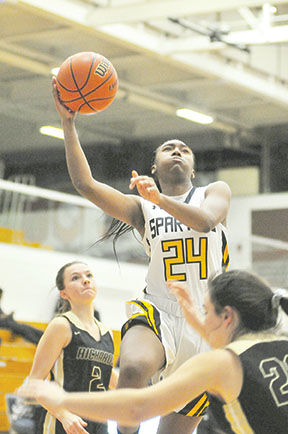 Freshman guard Brianna Hill piled up 14 points and 6 steals against Richards, including 11 points in the decisive third quarter. (Review photo) 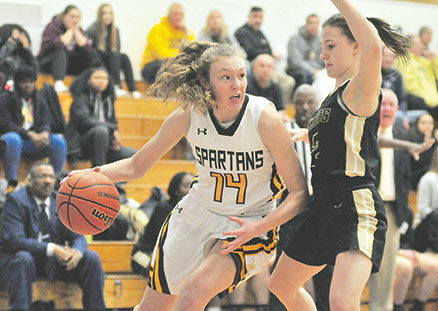 Freshman guard Brianna Hill piled up 14 points and 6 steals against Richards, including 11 points in the decisive third quarter. (Review photo)

Even before stepping on campus as a freshman at Marian Catholic, Samantha Barrett had been a fan of the Spartans girls basketball program for years.

As a young student-athlete in junior high, Barrett was in the stands consistently for Marian games. So, to suit up on the varsity the last four seasons, it’s been an especially fun run.

Barrett finished with 10 points, 7 assists and 4 steals as Marian Catholic defeated Richards 59-21 on Feb. 25 in a Class 3A Hillcrest sectional semifinal.

In seeking to win the program’s first sectional title since 2014, Marian (26-9) was upset by Providence Catholic in a 40-38 defeat on Feb. 27 in the sectional final. Freshman Brianna Hill led the Spartans with 16 points.

The Spartans advanced to the sectional round for the 12th time in 13 seasons after the four-class postseason system was initiated in 2007-08.

A four-year varsity player, Barrett has been a huge presence all season for the Spartans, especially as the only senior in the rotation.

With freshmen and sophomores all over the lineup, Barrett was always there to help lead the way.

“You make sure they know the level of focus that is needed and the work to put in during practices,” Barrett said. “You want to be a good teammate and make sure they feel comfortable with everything in the program.”

The Spartans showed off that level of focus in a dominant third quarter.

Holding an 8-point halftime advantage, Marian unleashed its press in the Richards’ backcourt, forcing 10 turnovers in the quarter.

Kleszynski scored inside off a Barrett pass, and Hill followed up seconds later with a steal and an easy fast break bucket.

After a Richards retort, the Spartans closed the quarter on a lightning-quick 26-0 run. Barrett passed for 4 assists in the third.

Hill scored 11 of her 14 points in that quarter.

“We started in the locker room telling ourselves we needed to pick it up,” Hill said. “The first two minutes were going to be really important in the third quarter. We knew what we wanted to do putting the game away early.”

Junior guard Jules Cutrara hit a key 3-pointer for the Spartans at the buzzer to close out the second quarter. Marian led 21-13 at the half.

Hill, a 5’9” freshman, made an immediate impact this season for a youth-dominated Spartans squad.