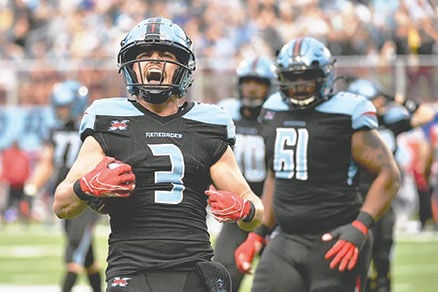 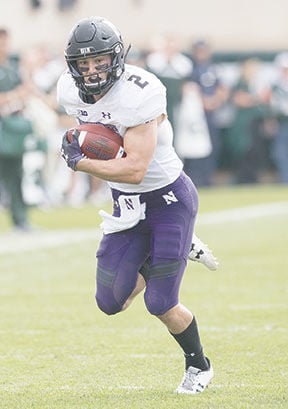 Flynn Nagel was a standout receiver for Northwestern University, finishing his collegiate career with 160 catches for 1,763 yards and 6 touchdowns. (photo courtesy of Northwestern Athletics) 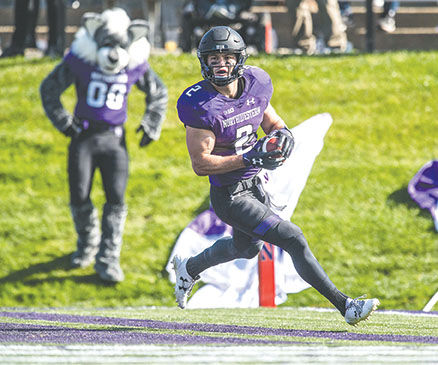 In 5 games for the Dallas Renegades, Flynn Nagel pulled in 27 catches for 227 yards and a touchdown. He also returned punts on special teams. (photo courtesy of Northwestern Athletics)

Flynn Nagel was a standout receiver for Northwestern University, finishing his collegiate career with 160 catches for 1,763 yards and 6 touchdowns. (photo courtesy of Northwestern Athletics)

In 5 games for the Dallas Renegades, Flynn Nagel pulled in 27 catches for 227 yards and a touchdown. He also returned punts on special teams. (photo courtesy of Northwestern Athletics)

Flynn Nagel didn’t think about it much at the moment.

It was only later that the former Marist football player and star wide receiver was able to look back and appreciate his accomplishment.

Playing in the XFL’s rebooted league’s first season, Nagel reeled in a 15-yard touchdown reception on Feb. 22 as the Dallas Renegades battled the Seattle Dragons.

The reception for the Renegades was his first professional TD.

“In the moment, I didn’t think about it. You’re just locked in on the game,” Nagel said. “I was just thinking about the play. It was pretty cool looking back on it. You never know what happens in the future. First pro touchdown was pretty cool. Hopefully, there are many more to come.”

Nagel spent his first three years of high school at Marist before transferring to Lemont High School for his senior year.

Nagel’s first professional season came to an unexpected end when the XFL canceled the remainder of its schedule due to the COVID-19 pandemic.

The Renegades were 2-3 through their first five games.

For Nagel, his breakthrough with Dallas was a huge step after a busy year since graduating from Northwestern University in spring 2019. In four seasons with the Wildcats, he accumulated 160 catches, 1,763 receiving yards and 6 touchdowns.

The 5’11”, 195-pound wide receiver went undrafted in the 2019 NFL Draft and was later invited to mini-camps with the New York Giants and Jacksonville Jaguars.

He worked out with several other teams, even missing his brother’s wedding to attend a last-minute invite for a workout.

Nagel was not ready to leave football behind. Named to the All-Academic Big Ten team three times, he earned an economics degree from Northwestern.

“You have this short window to play football. It was really important for me to keep trying,” Nagel said. “I was going to keep working my butt off and enjoy it. I didn’t want any regrets 10 years down the road when I look back. It was important to try and keep playing.”

Nagel said he especially clicked during his workout at Jacksonville with first-year Jaguars quarterback Gardner Minshew.

When the workouts with NFL teams came up empty, Nagel kept chipping away. He was eventually picked up in the XFL’s draft by the Renegades and Coach Bob Stoops, the former head coach of the University of Oklahoma.

Despite the shortened season, Nagel loved the ride, especially as the league tweaked some rules that separated its identity from the NFL.

“The ratings were good, and the revenue was doing well from what we heard,” Nagel said. “It was just really bad timing with the coronavirus. The league was for people who want to watch football and players who want to play. I had a lot of fun.”

A reliable slot receiver for Renegades quarterback Landry Jones, Nagel piled up 27 catches for 227 yards and a touchdown. Playing on special teams, he also returned 6 punts for 97 yards.

Now as the country quarantines and self-distances, Nagel is looking to the next step. He’s hoping to sign on with an NFL team this offseason, likely after the NFL Draft at the end of April.

He knows the draft will feature a deep wide-receiver class, and his work is cut out for him. Still, he’s always been up for a challenge. The XFL’s second season in 2021 is also on his radar.

“I’m not a freak athlete who’s going to jump out of the gym or run a blazing fast 40,” Nagel said. “When it comes to just the football, that’s where I excel and try to separate myself from everyone else. It is challenging, but I just need to get my foot in the door.”

In the meantime, he’ll stay busy as he chases his football dreams.

“Gyms are closed obviously, but I’m out there running and lifting at home,” Nagel said. “I’m staying in shape and out catching balls. I’m trying to do everything I can to stay in shape so I’m ready whenever that opportunity does come along.”