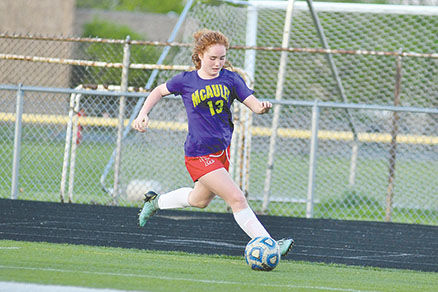 Mother McAuley junior Janey Hynes is heading into her third year on the varsity. She was a standout defender for the Mighty Macs last season in her first year starting on defense. (Review file photo) 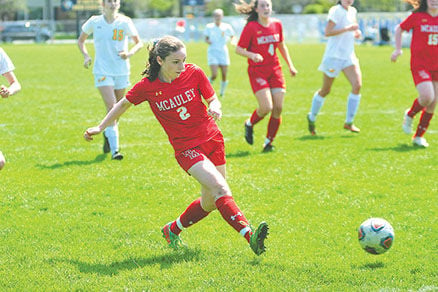 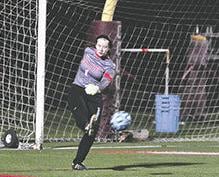 Mother McAuley senior Caitlin Fitzsimons has started in goal for the Mighty Macs since her freshman season. (Review file photo) 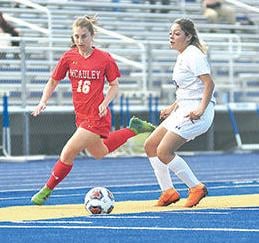 Junior Abby Grobarcik was a huge presence for Mother McAuley in her sophomore season playing as a midfielder and forward. Grobarcik is a Mt. Greenwood resident. (Review file photo)

Mother McAuley junior Janey Hynes is heading into her third year on the varsity. She was a standout defender for the Mighty Macs last season in her first year starting on defense. (Review file photo)

Mother McAuley senior Caitlin Fitzsimons has started in goal for the Mighty Macs since her freshman season. (Review file photo)

Junior Abby Grobarcik was a huge presence for Mother McAuley in her sophomore season playing as a midfielder and forward. Grobarcik is a Mt. Greenwood resident. (Review file photo)

Caitlin Fitzsimons first felt a sense of dread when Mother McAuley High School announced in mid-March that it would close for two weeks due to the COVID-19 virus.

She felt that dread again when Gov. J.B. Pritzker enacted a shelter-in-place order that would run through the end of April.

All the while, Fitzsimons knew her senior soccer season was uncertain. However, no matter how bleak things seemed, she stayed upbeat.

Although Pritzker ordered all Illinois schools closed through the end of the academic year on April 17, effectively ending the high school spring sports season, Fitzsimons is not lingering on the negative.

“It’s definitely sad because it’s my senior season, but I’m happy I got the three years that I did,” Fitzsimons said. “These were the best three years of my soccer career. I was going to stay positive even if we didn’t get the season in.”

The Illinois High School Association announced its final decision about the spring sports season on April 21, after press time. When details become available, The Beverly Review will have a complete report online at beverlyreview.net.

For the Mighty Macs, the cancellation comes at a particularly inopportune time. A year ago, McAuley went 16-7-2 during a huge campaign, ultimately losing to Lincoln-Way West in penalty kicks in a regional championship game.

McAuley Coach Jenna Johnson is in her first year after being assistant coach at her alma mater the last three seasons. She replaced Coach Denny Clanton who resigned after last season to move to Georgia with his family.

Through those early weeks of practice in March, Johnson witnessed many of the factors that could have resulted in another big season.

“There was plenty of excitement from the get-go,” Johnson said. “We had that desire to win right away, and the girls had confidence in one another. There was a good team chemistry early.”

Fitzsimons (Alsip, St. Christina) would have been a key player at goalkeeper. She was a three-year starter in net for the Mighty Macs, and she recently committed to continue her academic-athletic career at Carroll College in Wisconsin.

“Her blocking skills are great, and her foot skills are some of the best I’ve ever seen,” Johnson said. “She’s strong with goal kicks, and she can field a punt. She’s not going to make any errors back there and will clear it accordingly. You can always trust Caitlin back there.”

Fitzsimons started off her athletic career at a young age playing Gaelic football, a soccer-like game that allows players to use their hands. She later got into soccer, where she found her favorite position as goalie.

“I learned it is all about talking more,” Fitzsimons said. “I’ve really improved just communicating with my defense. From the goalie’s point of view, you need to be that voice behind the defense. You have to guide everyone through the play, to be clear and be supportive.”

Despite losing two key defenders off the back line in Nikki Murphy and Brenna Keating, the Macs’ defense would have been its strength this year.

Junior defender Janey Hynes (Mt. Greenwood, St. Christina) is in her third season on the varsity and would have been a defensive stalwart for McAuley.

What a difference a year makes.

“I grew up playing forward and midfield, including freshman year. Last year was my first playing defense,” Hynes said. “My first game, we were playing Downers Grove North, and one of their girls, 6’2”, built like a machine, turned on me and just used her longer legs for a score.”

With a quick halftime adjustment shifting over on the line from center back to left/right back, Hynes was ready to go.

Throughout the quarantine in March and April, Hynes has stayed busy working out, including some soccer sessions with her older sister, Grace, a freshman basketball player at the University of Chicago.

Grace was a standout forward on McAuley’s soccer team and played with Janey the previous two years. For the younger sister, it was an enjoyable experience and one that would help her teammates.

“Grace did such a good job making sure everyone was comfortable on the varsity,” Janey said. “I took a lot of pride watching, playing and working with my big sister. For myself, I wanted to be that way too this year. She taught me so much. I wanted to be the same way.”

Other key players for the Mighty Macs that were expected to shine are senior forward Jenna Badali and junior midfielder Abby Grobarcik (Mt. Greenwood). Sophomore midfielder Angelina Garcia and freshman forward Ciara Hosty were also likely to be major contributors.

Looking to the future and the 2021 season, Hynes said the Mighty Macs have plenty of potential. But for now, she can’t help but think of the Class of 2020.

“A lot of us, we’ll be back next year. But our seniors, I feel so bad,” Hynes said. “It was possible we’d get a season, but there was so much unknown. We were making sure we were staying in shape and ready to kick butt if we played. Our practices early, it was a time to bond as a group. The team felt like family already.”