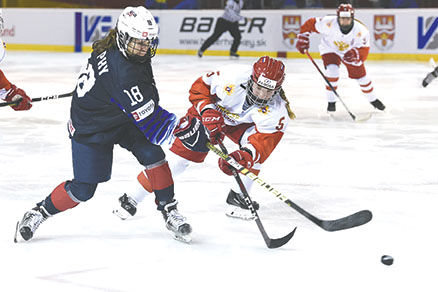 Abbey Murphy, an Evergreen Park resident and Mother McAuley senior, helped lead the Team USA U-18 squad to a gold medal at the world championship in Bratislava, Slovakia. (photo courtesy of USA Hockey) 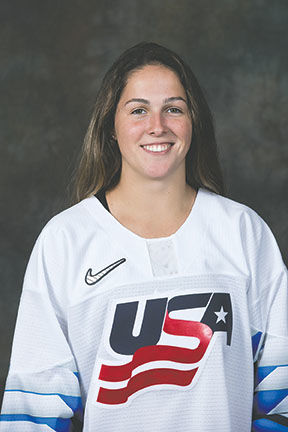 Abbey Murphy (center on ice) celebrates with her Team USA teammates after defeating Canada 2-1 in overtime in the world championship. It was Murphy’s third year playing with Team USA. (photo courtesy of USA Hockey)

Abbey Murphy, an Evergreen Park resident and Mother McAuley senior, helped lead the Team USA U-18 squad to a gold medal at the world championship in Bratislava, Slovakia. (photo courtesy of USA Hockey)

Abbey Murphy (center on ice) celebrates with her Team USA teammates after defeating Canada 2-1 in overtime in the world championship. It was Murphy’s third year playing with Team USA. (photo courtesy of USA Hockey)

Abbey Murphy is no stranger to not-so-traditional Christmas celebrations, courtesy of her time playing hockey with Team USA.

So, as the USA U-18 team prepped for the world championships in Bratislava, Slovakia, Murphy, a senior at Mother McAuley, added another chapter to her unique holiday celebrations.

This year, it was a Christmas Eve party with a secret Santa, and then on Christmas Day, it was practice, team pictures and a low-key hangout day.

Then, it was time for hockey.

Murphy helped lead Team USA to the title, scoring a goal in the championship game on Jan. 2 in a 2-1 overtime win against Canada as the U.S. won the 2020 International Ice Hockey Federation U-18 Women’s World Championship.

“It’s an unbelievable feeling,” Murphy said. “I’ve done it the last three years, so it’s super cool. The first goal got everyone really excited, and it was a good start to the game. It made me feel a lot better, too, just to be able to score and keep going.”

It was the third straight year that Murphy (Evergreen Park, Most Holy Redeemer) played with Team USA, winning gold in Russia in 2018 and silver in Japan in 2019.

The silver medal (losing to Canada) left a bad taste for Team USA, especially after struggling against the Canadians in a tournament this fall.

“It was good redemption,” Murphy said with a smile. “We had a tough last year. Redemption was my main thing, especially coming out on top this year. We didn’t let them get into our heads. We went into the game confident

and ready to go.”

The U.S. beat Finland and Russia in pool play, defeating Russia again in the semifinals to set up a rematch with Canada. In the 4-1 win on Dec. 26 over Finland, Murphy scored a goal.

“Every single team there this year was really good competition,” Murphy said. “All the games were close. That’s the nervous thing, but those are the fun type of games.”

Murphy is now home and practicing with her club team, Chicago Mission, with the season running into early April.

From there, she’ll head to the University of Minnesota this summer to continue her academic/athletic career with the Golden Gophers.

Murphy has her work cut out for her from there, but she’s never been one to shy away from a challenge.

“There are a lot of really good players at Minnesota right now,” Murphy said. “I’ve got to work hard, so we’ll see how it goes. I will push myself to try and do it. I’m going to miss it here at McAuley, but I’m ready for it.”

As for her future with Team USA, the next step would be making the U-22 team that plays a series with Canada but does not travel as far

Wherever hockey takes her, Murphy has a great mentor in Kendall Coyne Schofield, a Palos native who has starred for Team USA internationally, including winning an Olympic gold medal in 2018 in South Korea.

“It’s always been a goal to be like her,” Murphy said. “I go to her camp every July. Those are fun. It’s a big motivation. She’ll text me saying ‘Good luck’ or ‘Take it all in; remember it all.’ Not a lot of people get this chance, so it’s pretty cool to be one of them.”