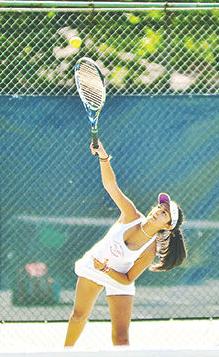 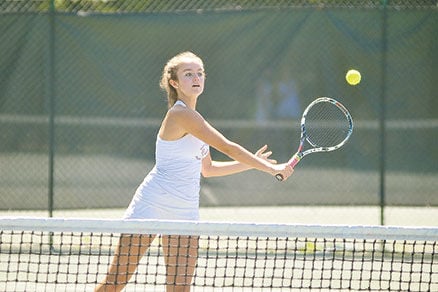 Senior Allison Hughes makes a play at the net. Hughes and Maya Goyal have been doubles partners for two-plus years. (Review photo) 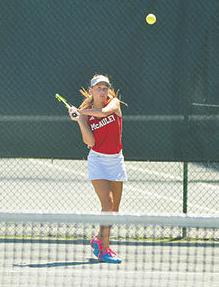 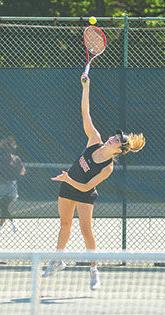 Senior Allison Hughes makes a play at the net. Hughes and Maya Goyal have been doubles partners for two-plus years. (Review photo)

Losing a strong senior class and with the team’s best player not returning this season, the St. Ignatius girls tennis team’s lineup was open and there for the taking.

Veterans needed to step up, and newcomers had to find their niche.

In that respect, senior Maya Goyal and the Wolfpack are ready for the challenge.

“Even though we lost some of our best players, we can rise up and have a strong season,” Goyal said. “We’re really improving early this season. You can really tell, especially with our fitness with all the drills we’re doing in practice and working hard.”

St. Ignatius and Mother McAuley tied 8-8 with the Wolfpack claiming the title via a tiebreaker, winning 114 games to McAuley’s 111.

Goyal and senior Allison Hughes went 2-0 in their matches, defeating McAuley and Marist at No.-1 doubles.

The duo is playing together for the third straight season.

“We have different strengths and weaknesses, so our chemistry is good,” Hughes said. “I’m stronger at the net, and Maya has great, consistent ground strokes. It really helps when we can play to our strengths and help each other.”

Hicks has won 5 singles matches and 2 doubles matches in her state trips.

Now a senior at the head of a young team, Hicks is ready to lead the way. She is a team captain along with Goyal and Hughes.

“As one of the captains, I want to set an example in practice, keeping everyone going energy-wise and helping do stuff when no one wants to,” Hicks said. “We can go really far as a team. Playing singles, the focus is to make it further at state, going deeper into the draw.”

Other winners this year included sophomore Helena Cilella (1 win each at No.-1 and 2 singles), Ellie Wangard (win at No.-2 singles), Abby Weis and Kathryn Starshak (No.-1 doubles) and Skye McKenzie and Megan Kelly (No.-2 doubles).

The tiebreaker loss certainly stung for a young Mighty Macs squad, but for sophomore Leah Zemgulys, it was still a step in the right direction.

“We definitely showed a lot of improvement today from last year,” Zemgulys said. “Everyone played their hardest and really gave it their all. Going in, we were ready to show some fight.”

Zemgulys (Beverly) won both her matches at No.-2 singles.

After a tough end to her freshman season, Zemgulys set goals for her sophomore year.

“I lost at sectionals just short of the qualifying round, so I just missed out on state,” Zemgulys said. “It was one of the best matches I’ve ever played. I want to keep it consistent and have good wins and a good season.”

Other winners included Hannah Markiewicz and Colleen Connolly (one win each at No.-1 singles), Maya Kamin (No.-2 singles) and Katie Metzler and Hannah Novak (No.-1 doubles).

Amelia Quinones and Samantha Rodriguez, and Annamarie Olsen and Nicole Todd won a match each at No.-2 doubles.

For Markiewicz, the positive showing is a huge early-season boost.

“It gives us all a big positive doing well at our first tournament,” Markiewicz said. “It can keep the momentum going throughout the year where we can win more games and more tournaments.”

Taking the SAT at Homewood-Flossmoor High School, senior Nicole Micklin missed her early matches but was able to get to the tournament in time for a late win at No.-1 singles.

The RedHawks finished third with 7 points.

“I drove here after the test, changed and played that match,” Micklin said with a smile. “It’s the confidence that builds me up, getting in the spirit of the tournament. I was ready to go.”

A three-time state qualifier, Micklin has won 5 matches at state.

She battled through a back injury as a junior but is feeling healthy for her last high school go-around.

“It’s a reoccurring injury, but it’s gotten a lot better,” Micklin said. “I’m going to the gym every day, working out and lifting weights. My day usually ends with yoga and stretching so that my body recuperates. I’m feeling good, a lot better than last year.”

“It was such an honor to be voted team captain,” she said. “I was so happy to get a chance to lead the team and have this opportunity.”

Georgelos is in her second year on the varsity after returning to tennis from cheerleading.

“I played when I was little but wasn’t very good,” she said. “I did cheerleading because I was very small, but I’d gotten taller and was playing better. I decided to come back to tennis.”

Sophomore Brooke Anderson won a match at No.-1 singles for the Warriors.