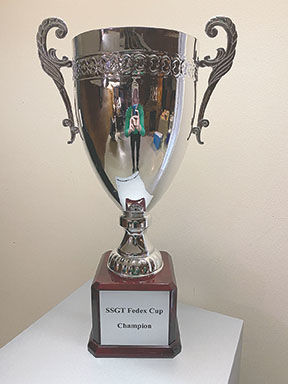 The South Side Golf Tour, sponsored by S&T Provisions, is heading into its second season. The tour features 10 regular-season stops, including four Majors, a playoff and then a championship round at golf courses on Chicago’s South Side. The winner will be awarded the S&T Provisions Cup. (photo courtesy of Tom Tassone) 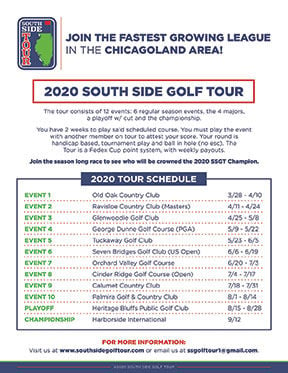 The South Side Golf Tour, sponsored by S&T Provisions, is heading into its second season. The tour features 10 regular-season stops, including four Majors, a playoff and then a championship round at golf courses on Chicago’s South Side. The winner will be awarded the S&T Provisions Cup. (photo courtesy of Tom Tassone)

Tom Tassone was a little late to the party in finding his favorite sport.

He had played golf before but truly found his love of the game in his early 20s while serving with the U.S. Air Force in Panama City, Fla.

He remembers a golf-lifer coming up to him, playing a round with him and eventually building him a set of golf clubs.

Tassone hasn’t looked back, and now he’s hoping to continue to spread his love of golf.

For the second straight season, Tassone is organizing the South Side Golf Tour (SSGT), a 12-event tournament running from April through September with a Fedex Cup point system with each tournament featuring weekly payouts.

“I first came up with the idea a couple years ago and started working at it,” Tassone said. “You’d hear about some underground tournaments, but there was just no amateur golf tour [in Chicago]. I figured 40 players tops last year, but it went from 40 to 60 to 80 to 100. We’re hoping to take that momentum into year two.”

Originally scheduled to begin the week of March 28, the South Side Golf Tour was pushed back two weeks following Gov. J.B. Pritzker’s shelter-in-place order on March 21.

With 12 stops around the Chicago area, the SSGT offers competitors an easy solution instead of requiring them to play a round at a course on a specific day.

Golfers have two weeks to play a round with another tour member. Golfers are not required to play all 10 regular-season events, but the more they play, the more points they can earn.

“The biggest issue was just people getting together to play. People have jobs, families, kids, so we had to find a way to make it work,” Tassone said. “People are flexible from day to day, so you’ve got two weeks to play that event on the schedule.”

The response from courses after last summer’s tour was almost uniformly positive, a huge building block for the second go-around.

“Logistically, it really worked out,” Tassone said. “The courses don’t have to do much. Who wouldn’t want to do this? It was a no-brainer. We used that leverage moving forward from last year. We have a proven concept so we have a lot of courses offering discounts on green fees and then food, too.”

“On the championship, we had 30 people following along last year with those last groups on the last three holes,” Tassone said. “It was awesome to see. It was pretty cool to see these guys having a blast. Guys were talking about having butterflies and nerves while playing they hadn’t had in years.”

For more information on the tour, visit the website at southsidegolftour.com.

“Whether you’re an avid golfer or just a weekend golfer, it’s a cool chance to get out and play,” Tassone said. “You’re playing in a competitive game setting. It can be the perfect things for golfers.”