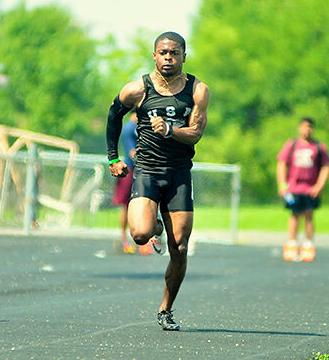 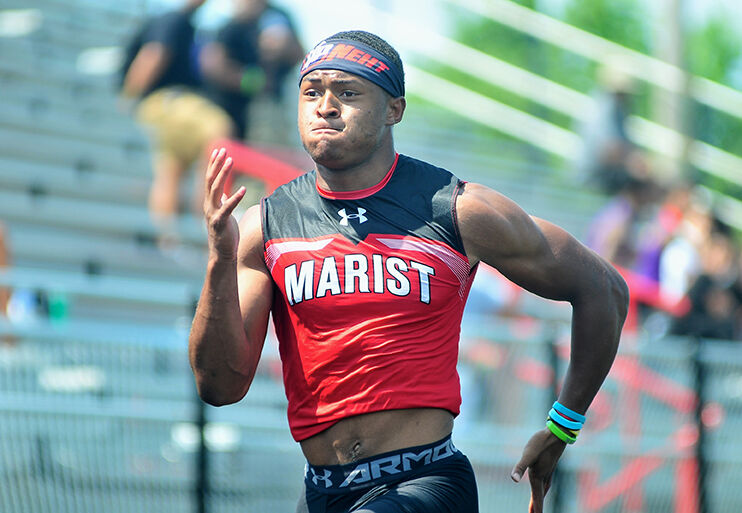 Marist senior Jovan Marsh races in the 100-meter sprint at the Chicago Sprints and Jumps meet. Marsh is also a key player on the RedHawks’ football team. (Review photo) 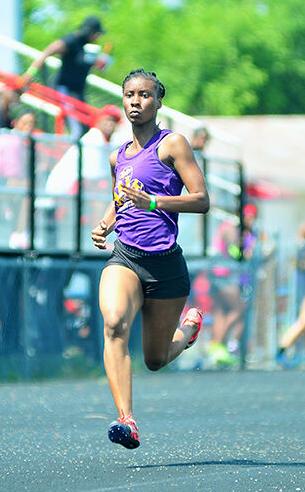 Hounds and Foxes runner Symone Frison seemingly floats to a first-place finish in the 100-meter sprint in the sixth- to eighth-grade division race. (Review photo)

Marist senior Jovan Marsh races in the 100-meter sprint at the Chicago Sprints and Jumps meet. Marsh is also a key player on the RedHawks’ football team. (Review photo)

Hounds and Foxes runner Symone Frison seemingly floats to a first-place finish in the 100-meter sprint in the sixth- to eighth-grade division race. (Review photo)

Brailyn Johnson wasn’t overly focused on his time in the 100-meter dash at the Chicago Sprints and Jumps track-and-field meet on July 25.

Instead, the recent St. Laurence grad was keyed in on competing against a strong field after a long layoff in competitions due to the COVID-19 pandemic.

Johnson was just wanted to get out and run at the meet hosted at St. Rita High School.

“These last two weeks, I was able to get some hardcore training in, long distance, tempo workouts,” Johnson said. “You’ve got to work with what you’ve got. I was blessed to have these meets to run before I head off to college. It played out well, so I’ll take it.”

Johnson is an Eastern Illinois University track-and-field recruit who graduated this spring from St. Laurence where he competed in track and field and on the football team.

“I felt good coming out. I felt like I over warmed up,” Johnson said. “Going down the straight, I lost the kick I had coming out of the blocks. Other than that, I felt good. Marshall and [Jovan Marsh] gave me a good push. Everything felt good. It was good just to run.”

After a strong showing in the indoor season this winter, Johnson was poised for a huge outdoor year only to see the spring season canceled due to the pandemic.

“Coming into the outdoor meets, I felt like it was going to be a hot season,” Johnson said. “The first indoor meet I ran 6.9 seconds [in the 60-meter dash]. The virus stopped a lot of stuff, from practice to just leaving the house, you couldn’t even get a little work in.”

Johnson could potentially play football at EIU, but that decision has yet to be made.

Taking a quick break from football practices, Marsh, a senior-to-be at Marist, finished third in the 100-meter dash (11.63 seconds).

Marsh saw time on both sides of the ball as a junior for the RedHawks.

“It’s exciting being out here,” Marsh said. “I really missed having a season. We didn’t get that outdoor season. Being out here with Marshall and Brailyn, it’s always fun competing against them.”

Balancing two sports through the offseason, Marsh said he typically devotes his summer weekdays to football and the weekends to track.

But, this summer he simply worked out as much as possible.

“With such a long break, it takes a minute to get back into the swing of things with track,” Marsh said. “It’s two different conditionings, two different sports. I gained a few pounds for football, so transitioning over to track [for today], it’s an experience. I love the work.”

The Hounds and Foxes Running Club, an area team that trains at the Kroc Center, in West Pullman, was well represented at the meet.

The meet was hosted according to social-distancing and health guidelines. Instead of using all eight lanes for a race, runners were assigned to every other lane.

Sprinters and field athletes were encouraged to warm up in an area away from the track to help limit the number of people congregating in the stadium. In addition, all spectators were required to wear a facemask.

Another restriction required all competitors and spectators to have their temperature checked before entering the stadium.

“The meet was great to see as a coach,” said St. Rita Coach Pierre Nealon. “A lot of the athletes are happy to be out here. Everybody has been sitting on their couch watching Netflix the last two, three months. Everybody wanted the real thing, so we wanted to give them the opportunity to come out.”

While all levels of sports from youth to high school, college to pro continue to be impacted by the coronavirus, Nealon said the new normal at meets and other sporting events will take some getting used to.

“It’s a preview of what’s to come. I don’t see this virus going away in the next week or fall into winter,” Nealon said. “We have a new track facility opening up at Gately Stadium. Indoors mean less lanes, but that could be the new reality: limited people per section and meets two to three hours longer than they were.”