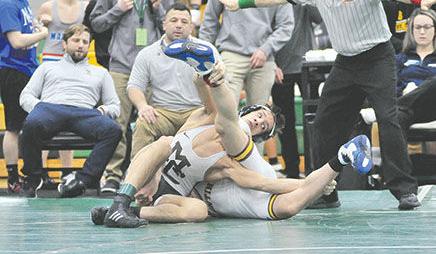 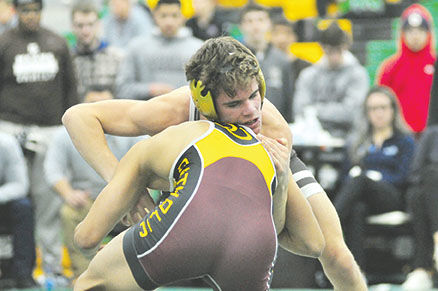 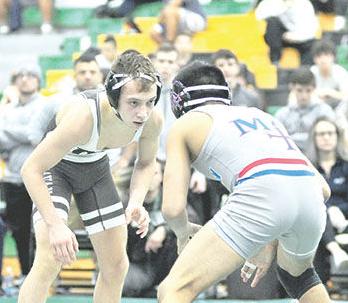 Freshman Sergio Lemley tangles with Marmion Academy junior Diego Sotelo in the 113-pound championship. Sotelo squeaked out an exciting 2-1 win in a matchup of the two top-ranked wrestlers at 113. (Review photo)

Freshman Sergio Lemley tangles with Marmion Academy junior Diego Sotelo in the 113-pound championship. Sotelo squeaked out an exciting 2-1 win in a matchup of the two top-ranked wrestlers at 113. (Review photo)

Noah Mis had an outstanding sophomore season for the Mt. Carmel wrestling team.

He helped the Caravan to the Chicago Catholic League (CCL) title, finished fifth at state and saw Mt. Carmel come up just short of making the state finals tournament as a team.

This year, Mis hopes the end of his junior season will be even better.

After finishing second at the CCL meet last year, Mis claimed first place on Jan. 25 at Providence Catholic at 132 pounds with a 5-1 decision over Montini’s Ethan Stiles.

Mis and Stiles are the two top-ranked wrestlers at 132 in the state.

“Yeah, it was tough losing last year. The kid I wrestled against was obviously really good,” Mis said. “From that moment, I knew I could win it. To come in this year, I wanted to win so bad and show I was the best wrestler.”

Mt. Carmel finished second (322.5 points) to Montini Catholic (373) in the standings. The Caravan and Broncos squared off in eight of the 14 championship matches.

The top two teams in Class 3A, Mt. Carmel and Montini will likely face off in late February at the dual team state championship.

“As a team, we came up short, but that keeps giving you fuel to the fire,” said senior Colton Drousias. “We have something we want at the end of the year. As a team, we’ll do whatever we can to get there and win state.”

Mis and Drousias were the Caravan’s two first-place finishers. Drousias defeated Montini’s Diego Sotelo 2-1 at 120 pounds. It was his second straight CCL championship.

“It was a tough match in the finals. I wanted to prove I was ready for it,” Mis said. “I didn’t want to get too crazy. I wanted to stay solid and mentally strong.”

In a matchup of the top two wrestlers at 113 pounds, Lemley (28-3) lost a 2-1 decision in the first tiebreaker to Marmion’s Diego Sotelo.

“Coming in, I had the same mindset I’ve had all year,” Lemley said. “It could have gone either way. He wrestled really well. I’ve got to push the pace a little harder, finish my shots, and I’ll be good.”

For junior Mikhel Teverbaugh, losing by fall in the championship at 182 pounds was a tough end to a strong meet for the Morgan Park resident.

Teverbaugh lost to Montini’s Trevor Swier in the title match.

“It’s bittersweet a little bit to see the transition I’ve made this year and how much better I’ve gotten,” Teverbaugh said. “It always hurts to not come first.”

Teverbaugh (Clissold) transferred from the Chicago High School for Agricultural Sciences (CHSAS) to De La Salle last summer. He was the first CHSAS wrestler to win a match at state.

The transfer has been smooth for the junior.

“The season has gone really well. De La Salle felt like the right decision,” Teverbaugh said. “I’ve wrestled way more matches than I did last year, and the coaches have been great.”

Finishing fifth (101 points) in the standings, the Vikings were led by senior Sean Burns’ fourth-place finish at 285.

Other top-six finishers for Br. Rice were sophomore Nathan Chirrillo (138) and junior Kevin Gilhouly (170) in fourth and junior Austin Veal (285) in fifth.