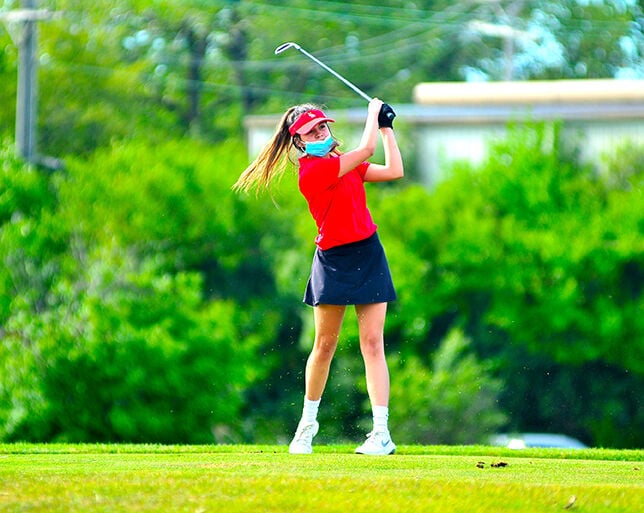 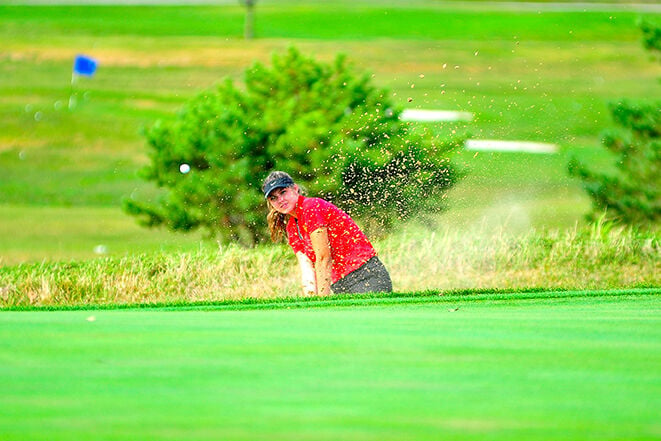 Mother McAuley senior Morgan Soch successfully hits out of a sand trap on No. 5 at the Meadows. Soch finished with a 40 for the Mighty Macs. (Review photo) 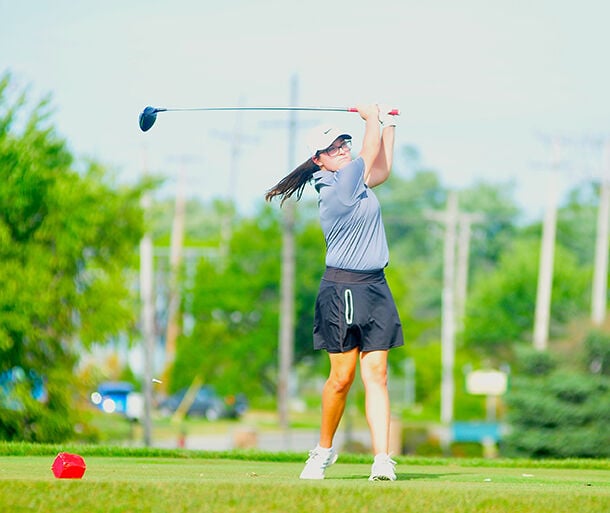 Marist junior Mallorie Clifton tees off at No. 6. Clifton led the RedHawks against Mother McAuley, carding a 43. (Review photo) 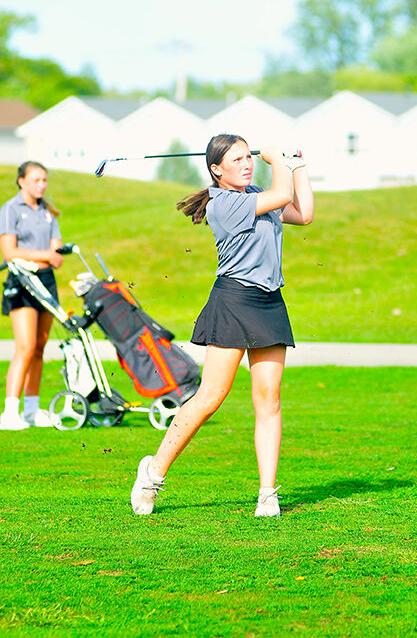 Marist junior Delaney Bullington watches her approach shot on No. 6. Bullington, an Evergreen Park resident, finished with a 45. (Review photo)

Mother McAuley senior Morgan Soch successfully hits out of a sand trap on No. 5 at the Meadows. Soch finished with a 40 for the Mighty Macs. (Review photo)

Marist junior Mallorie Clifton tees off at No. 6. Clifton led the RedHawks against Mother McAuley, carding a 43. (Review photo)

Marist junior Delaney Bullington watches her approach shot on No. 6. Bullington, an Evergreen Park resident, finished with a 45. (Review photo)

Gabi Hernandez has been on the Mother McAuley varsity golf team since her freshman season, and she’s grown up with the program over the last three-plus years

Now a senior team captain and settling into her new role, Hernandez knew what she had to do. Amidst a season played during a pandemic, she wanted to make sure the Mighty Macs had a close bond.

“We’re all adjusting to this together. We definitely have a good team bond,” Hernandez said. “Especially with all that’s happening with the coronavirus right now, it’s easier to be close with everyone as a team. Group messages, helping younger kids out, it makes us closer.”

Hernandez and the Mighty Macs got the season off to a hot start as Mother McAuley shot a 172 to defeat rival Marist (179) on Sept. 2 at The Meadows Golf Club.

The two school rivals have faced off in a triangular meet the last five seasons as part of the Caroline Griffin Golf Tournament, but the last time McAuley and Marist squared off in a dual meet was in 2015.

“There’s pressure. We’re rivals, and we want to win,” Hernandez said. “Me and Morgan are familiar with the girls we played with, so it’s fun to have that and play those familiar faces while still competing.”

Hernandez and Soch (Oak Lawn, St. Catherine) paced the Mighty Macs in the dual win. The seniors are both team captains.

With a roster featuring an abundance of sophomores and juniors, they’re doing their best to lead the way.

“Gabi and I as the captains this year, it’s been nice,” Soch said. “We’re trying to be encouraging and help all the girls, the new players and returning players. It’s about staying positive. One bad shot doesn’t determine your whole round.”

Soch said she delivered an all-around solid day with her driver and putter coming to play. She sunk a 25-foot putt on the par-4 No. 4 to save par.

“I had a really good round today. My putting was really good,” Soch said. “[Putting] helped me overall, and I had some good drives. We need to keep working together and adjust to what’s going on right now.”

Mother McAuley Coach Caitlin Carney said she likes her team’s potential during this unique fall season, especially the leadership qualities of Hernandez and Soch as captains.

“I couldn’t think of two better captains,” Carney said. “They’re so approachable, and the girls have such a good bond already with them. Last year even, they took girls under their wing, made them feel like they were part of the team.”

It was the first meet of the season for McAuley with the team cancelling earlier scheduled meets because of extreme heat and rain.

Marist Coach Ryan Doidge said the RedHawks dug themselves an early hole and were unable to recover.

“We had a hard start. It’s mentally tough after that,” Doidge said. “Several of the girls really picked it up those last three holes and had pars from there. With a rough start, lost balls and three-putts, it’s difficult.”

“The girls [at the schools] all know each other. It’s a good time,” Doidge said. “They enjoy it. They’re mentally tough. The girls always bounce back and push through the season to the end.”